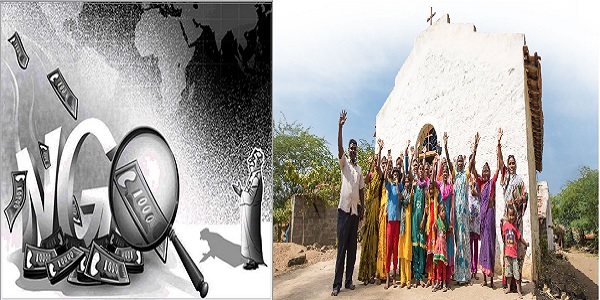 A Hindu mother has knocked the doors of the District Police Commissioner after her charge that her 22-year-old daughter was forcefully converted to Christianity was rejected by local police, reports LiveHindustan. The mother is pleading police to help bring her daughter back into the Hindu fold.

Last week when the daughter who works in Tiruchirapalli came home, her mother noticed she was hearing a cross pendant necklace. When questioned, the girl said she had converted to Christianity. Her mother then complained in Sulur police station. Police claim that the girl told them she had converted out of her own free will, and hence the mother’s complaint was rejected.

The Christian missionary conversion mafia is rampant in large swathes of the country, with southern states like Tamil Nadu, Andhra Pradesh etc. being particularly infected. They have boundless resources at their disposal with foreign FCRA funds flowing in from believers & even Government grants from Western nations like US, UK, Germany etc.

Several cases have demonstrated how this conversion mafia fractures families & society and spreads poison. A few years back, a father in Mysuru, Karnataka who got converted to Christianity went on an angry rampage against his own teenager son for refusing to abandon Hindu Dharma.

In Goa, HinduPost has covered the case of a Hindu maid who was being pressurized to convert by her own relatives who had converted. The maid’s uncle (A Kannadiga) who was a worshipper of the goddess Yellama earlier, after embracing Christianity told the maid that she was worshipping the devil and that she would go to hell if she didn’t embrace the true God — Jesus Christ. Another boy who converted claimed that his parents would be going to hell because they rejected Jesus and worshipped ‘forms of the devil.’

In East UP’s Jaunpur, another Hindu mother belonging to a Scheduled Caste had complained that her 22-year-old daughter was kidnapped by a missionary gang operating in their village – they threatened to kill the girl unless the entire family converted.

The strategy often used by the missionary mafia is to first offer humanitarian assistance to poor people in form of rations, clothes etc. Gradually, they start using cultural appropriation (like claiming Jesus’s coming was foretold in Hindu religious texts) and trickery like quack healing to fool & influence the natives. Finally, the potential convert is taught to hate Hindu Dharma and abuse its Gods.

Such predatory proselytization spreads communal disharmony and is a form of cultural genocide which the world is oblivious to. One of the most urgent actions that the Government of Bharat needs to take to counter this menace is to ban FCRA fund inflow, a lion’s share of which goes to the Christian missionary organizations of various hues. A national anti-conversion law, similar to Russia’s ‘Yarovaya law’ should be the next step.