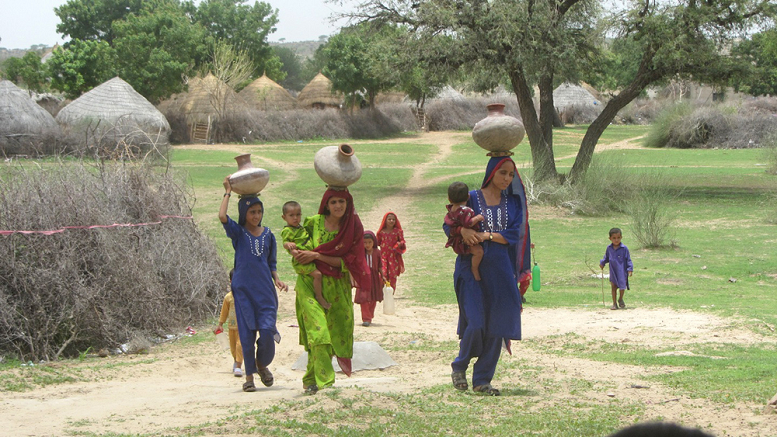 Tharparkar disctrict in Sindh province has been familiar for its natural beauty because of beautiful rivers, mountains, desert sands, animals and its multi dimensional culture, it is also popular for its peace within the Hindu and Muslim communities; more than 40% of the total population is Hindus who belong to Scheduled Castes. The life dependency of Thari people from different areas is only on the rain water which has been their dependency since they were born.

Animals, birds and all other living beings also depend on the rain water and the lack of rain heavily affect every life in the desert of Tharparkar. Families, livestock and the birds migrate during the drought like conditions to different barrage areas to fulfill their needs of food and fodder. People migrate along with their families from Tharparkar to Mirpurkhas, Badin or Hyderabad district in the search of food for themselves and their livestock, unfortunately due to lack of good governance and improper implementation of policies by NGOs working there; they have to suffer and migrate every year for years.

While moving to such barrage areas they have to face several hurdles on their way to often an unknown destination. More than 80% of people living in rural towns of Tharparkar have their life dependency on livestock with the help of which they live everyday through selling their milk, butter and oil but in a harsh time of drought they even cannot fulfill their basic needs which becomes a consequence for their migration.

While migrating to the barrage areas in the search of food and fodder they often have to send their children, aged family members and women in Mazda or trucks (vehicles; commonly used for loading stuff, grains and animals) whereas young boys walk along with their livestock and cover the same distance of about 400 kilometers in seven to ten days to reach the same distance. Due to unstable financial conditions they have to move and live in hard situations while their journey through walk to other areas of Sindh from Tharparkar desert.

Families sometimes leave one of their male family members to stay in their homes back in Tharparkar while rest of the others move to the barrage areas due to crops cultivation and food for their livestock. They often return after two to three months after earning the fodder for their livestock and grains for their children to sustain with food needs for three to four months of future.

Such migration highly affect the mental growth and the education of children as earlier they were enrolled in some other schools and a place where they migrate have no schools or they do not accept them without a certificate from previous schools. Later on, due to such gap of three-four months they deny of going to school in their hometowns and a small number of students who stay there have a lead on these children who migrate so they leave their study and the same way next year the same cycle is repeated of their journey.

While their migration they often stay in the temporary huts which they prepare only for few months. Such huts do not have a proper shelter for sun light, rain or anything which keeps them safe in winter; several new born and infants have to suffer due to different diseases which become a cause of their death.

Such inhuman happenings with humans of Tharparkar continue throughout the year whereas the government and NGOs working there could not plan a long term sustainable strategy for their development due to which the life of locals have been in peril; they have to suffer for the education of their children, economic instability, food etc.

Several youngsters commit suicide each month due to weak economic conditions, there is a dire need for organizations and government to deeply think about the possibilities to stop the migration so that the life of the people of this region could sustain for a better living.