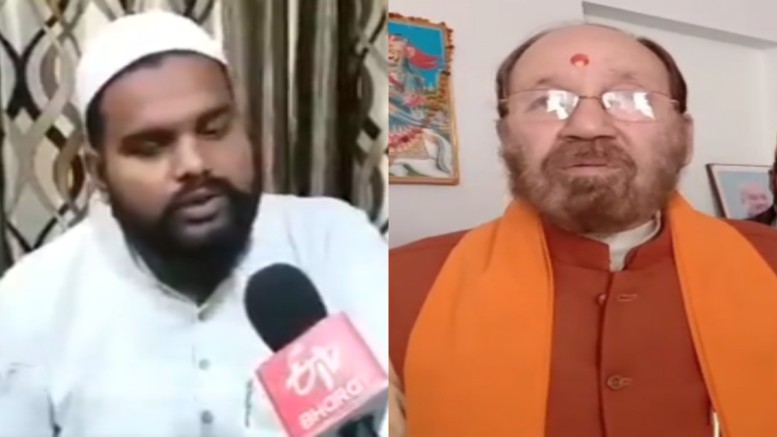 A viral video has recently come to light where a mullah has declared that he shall pay Rs. 1 crore to anyone who can behead Swami Darshan Baharti and bring his head to him. The mullah, named Hafiz Faizan Raza is from Bareilly in UP and was braze enough to repeat this offer to Muslims at large on TV. In fact, on TV he went even further that anyone who speaks against Islam will face the same fate. He alleged that Swami Darshan Bharti of Uttarakhand has been spreading hate against Islam and Muslims.

What exactly did Swami Darshan Bharti do?

Swami Darshan Bharti has been quite vocal for issues of Hindus in Uttarakhand for quite some time. This is perhaps the reason that mullahs are not happy with his activism. In past, he has opposed Muslims purchasing land in holy towns of Badrinath and construction of any Mosque or Madarsa there. In fact at that time, Maulanas from Deoband had said that Badrinath is originally Badruddin Shah, a holy place of Muslims encroached by Hindus and should be given back to Muslims! A Maulana had warned that Muslims would march there and take control of it, if the government refuses. Bharti and his organisation had organised protests aganinst the move.

In recent times, Swami Darshan Bharti has been quite active in opposing the increasing migration of Muslims to Uttarakhand and also demanding a stricter law to check “love jihad” or grooming of Hindu girls by Muslims in Uttarakhand. He was on a hunger strike in April to check the instances of such grooming and demanded a stronger law. He had stopped only after the CM himself came and requested him to relent after assuring him of adequate steps. He has also been opposing Christian conversions in the state.

Who is Maulana Hafiz Faizan Raza?

Hafiz Faizan Raza is the manager if a madarsa in Bareilly and is also national president of an organisation called “Sarva Samaj Samgathan“. He has been politically quite active and has developed connections with various leaders in Uttar Pradesh. In the posts given below, from his facebook page, he can be seen with Bhim Army chief Chandrasekhar Azad “Ravan”, Rakesh Tikait and also  seems to have been close to Shivpal singh Yadav, uncle of Akhilesh Yadav. He also seems to be an admirer of the deceased Iraqi dictator Saddam Hussain and jihadi Tipu Sultan.

Uttarakhand on the target

Uttarakhand has been one of the states with the highest Muslim population growth in the country. During the period 2001 and 2011, the percentage of Muslims in the population rose by a full 2%, from 11.9% to 13.9%. This was second only to the increase in Assam, which saw the rise from 30.9% to 34.2%! Since 2011, the percentage of Muslims in Uttarakhand has only risen and many areas, specially in plains have become Muslim majority. The district of Haridwar was 34.2% Muslim in 2011. Census 2021 would definitely reveal a much worse picture.

A large part of the Muslim population increase has been due to migration from districts of western UP, where Muslims already make about 40-50% of the population. In Garhwal region, the migration is more from districts like Saharapur, Meerut and Bijnaur and in Kumaun region, from Bareilly, Rampur and Moradabad. Being a small state, a population increase of a few lakhs due to migration will drastically change the balance of population in Uttarakhand. It is specially true in hills, where incidents of crimes and other undesirable activities have led to a demand for a strict law for permanent residence and for purchasing land.

In the meanwhile, UP Police has arrested the Maulana. However, security of Hindu social and religious leaders should be ensured as jihadis are known to strike after a few years. Kamlesh Tiwari should be a lesson for us, where from the lowliest Maulana to Owaisi, all bayed for blood until he was brutally murdered by a jihadi in his own home.