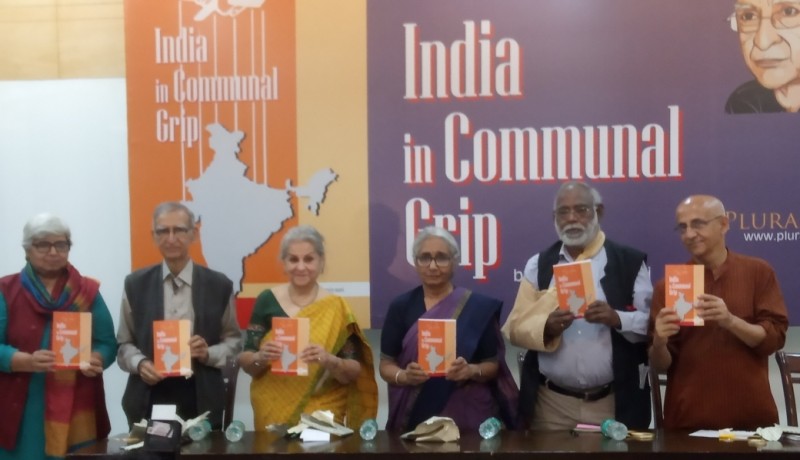 Lutyens’ Delhi is a posh upmarket area in the country’s capital which has today become synonymous with lobbying and hobnobbing with the corridors of power. It now stands for the ecosystem created by a select band of left-liberal intellectual, media and political individuals who have a disproportionate influence on our governance agenda.

For a long time this shady club has been setting the narrative and manipulating the population at large to achieve their ‘pre-set agenda’. It was (and still continues to be!) a closed club; entry and access to which is granted to those select few who swear by dead philosophies known as ‘COMMUNISM’, ‘SECULARISM’ and their variants. The advent and growth of Social Media (SM) has exposed this gang and their agenda completely. People have now become aware of the real face that was hidden behind the mask of so called ‘secular, liberalism’.

In the first part of our series on ‘Exposing Lutyens’, we will unmask the real face of so called ‘social activists’ who more often than not use NGOs, mostly foreign funded, as a front for their anti-Bharat activities.

1) Teesta Setalvad: She shot to fame during the 2002 Gujarat riots when she used the death of ex-Congress MP Ehsan Jafri to target the then Gujarat CM and present PM Narendra Modi by cooking up stories and pressurising witnesses to give false evidences. Teesta and her husband Javed Anand, along with several others such as Javed Akhtar, Rahul Bose, Cedric Prakash etc, started an NGO called ‘Citizens for Justice and Peace (CJP)’ on 1st April 2002, just about a month after the riots.

The Special Investigation Team (SIT) headed by ex-CBI director RK Raghavan accused Teesta Setalvad of ‘cooking up stories of macabre killings’ [1, 2] and ‘tutoring witnesses to give false evidences’ [3]. Sabrang Trust, run by Teesta and her husband Javed, was found to have indulged in FCRA violations and its registration was cancelled in 2016 [4].

2) Gautam Navlakha: Human rights is a good mask for leftist people to hide behind and Navlakha is one of those who uses this mask to good effect. He is one of the accused in the Bhima Koregaon violence following which Pune Police accused him of having links with the terrorist group Hizbul Mujahideen [5]. But his human rights mask falls of when he advocates separatism and endorses hatred for Bharat [6, 7].

What’s worse? He was one of those who supported ISI agent and spy Gulam Nabi Fai [8] and requested a US court to show leniency towards Fai [9].

3) Nandini Sundar: She is the wife of ex-The Hindu journalist and The Wire founder Siddharth Varadarajan and a professor in Delhi University. That her loyalties lie with the Congress is proved when she celebrated the victory of Congress during the Chattisgarh assembly elections [10]. For someone who masquerades as a journalist as well, we would expect some neutrality, isn’t it? However, Congress did not forget to reward her loyalty by dropping a murder case against her citing ‘lack of evidence’ [11].

A person’s Social Media (SM) handle is a good reflection of their thoughts and ideology. Nandini’s Twitter timeline (TL) is full of venom spewed against the BJP and of course supporting Congress. They use ‘Brahminism’ [12] as a front to hate everything Hindu while conveniently shutting their eyes to anything discriminatory among Abrahamics [13].

4) Harsh Mander: is an ex-IAS officer who has worked for a couple of decades in the states of Madhya Pradesh and Chattisgarh. He was a member of the Sonia Gandhi led National Advisory Council (NAC) that drafted the heavily biased and completely anti-Hindu Communal Violence Bill 2011 [14]. His membership in the NAC is enough to show where his loyalties lie.

His anti-Hindu stance isn’t surprising considering that he was handpicked by Sonia as a member of NAC. In addition, his NGO, Centre for Equity Studies (CES) has received Church funding [15]. Lying and fear mongering is second nature to likes of Mander, especially since the Narendra Modi led Bharatiya Janta Party (BJP) has returned with a greater majority. He, like most activists, uses his NGOs as a front to continue his anti-Hindu agenda [16].

5) Medha Patkar: Most of us are familiar with Medha Patkar and her Narmada Bachao Andolan (NBA) which stalled construction of a dam across the Narmada River that was set to benefit farmers of three states namely Gujarat, Madhya Pradesh and Maharashtra. The lesser known aspect of these protests is that NBA often used intimidation by threatening government officials [17]. The so-called social activist bats for illegal immigrants from Bangladesh [18], who more often than not have or develop links with terrorist organizations such as SIMI and IM (Indian Mujahideen). She was among those activists who requested for clemency for dreaded terrorists Afzal Guru and Ajmal Kasab [19].

6) Shehla Rashid: Another Hinduphobic ‘leftist’, a JNU product who uses activism to promote Hinduphobia and fuel anti-Bharat sentiments. She is a media savvy activist who knows how to harness Social Media to present her imaginary stories as ‘facts’ [20]. Even a liberal like SC judge Markandey Katju is of the opinion that the likes of Shehla Rashid and Kanhaiya Kumar are ‘phony’ and ‘not the kind of icons suitable for a secular Bharat’ [21]. Just like most activists, Shehla has also used crowd-funding to enrich herself [22].

7) Kavita Krishnan: She is a member of the Communist Party of India (Marxist Leninist) [CPI (ML)], a party whose ideology is based on violence [23] and hatred for anything and everything related to Hindu Dharma [24]. She has gone to the extent of justifying violence against our armed forces, the men who defend our boundaries by risking their lives [25]. In addition, she doesn’t blink an eye before batting for terrorist Burhan Wani [26]. But blaming the majority community doesn’t stop with Bharat alone and extends to Sri Lanka as well. She was quick to jump the gun and blame Buddhists for the horrific Easter terror attacks but began singing a different tune when to her dismay she found out that an Islamic terror outfit was responsible for the attacks [27].

8) Sudha Bharadwaj: was arrested under the Unlawful Activities (Prevention) Act (UAPA) for inciting caste based violence at Bhima Koregaon on 1st January 2018 that led to several deaths. Elgar Parishad brought to the fore her Maoist connections [28] and she along with Varavara Rao, Navlakha, Arun Ferreira and others have been accused of conspiring to cause social unrest. There is prima facie evidence [29] of her involvement in the Maoist conspiracy for which her bail application was rejected by the Bombay High Court [30].

9) Varavara Rao: He was one of the five naxals arrested for inciting caste violence in Bhima Koregaon on 1st January 2018. He calls himself a journalist and ‘revolutionary poet’. Like all urban naxals, Rao not just sympathizes with the extremist cause but actual wholeheartedly advocates separatism and ‘azadi’ in Kashmir and North-East [31]. He and his colleagues not just planned large scale violence to cause unrest in the country but hatched a plot to assassinate PM Modi towards the end of his first term [32].

10) Aruna Roy: Another civil servant and Sonia loyalist who served as a member of NAC. She was among those activists who opposed the then HRD Minister Murli Manohar Joshi’s introduction of Sanskrit and other Bharatiya traditions such as Vedic astronomy and Vedic mathematics among others [33]. Unfortunately for them and luckily for Bharat and Bharatiya traditions, the activists failed to gather judicial support [34]. She was among those who signed a petition asking for mercy for Ajmal Kasab [35].

Such activists form a closed knit group and often resort to the policy of ‘you scratch my back and I scratch yours’. Crying victimhood when caught red handed is another speciality of this group that has received political patronage of Congress-Left ecosystem for several decades now. Foreign funds, often linked to evangelical churches, are the fuel on which their NGOs run and promoting Hinduphobia is their favourite activity.

They have a battery of people in several key positions such as judiciary, lawyers, bureaucrats, politicians etc who are always ready to jump to their defence. Even though most of them have Hindu names, they are either crypto-Christians (which is difficult to prove) or definitely Hinduphobic with a single point agenda of undermining Bharat, its traditions and culture.