In one of our previous articles, we discussed how Bengal is inching toward an institutionalized Islamization. Saraswati pooja has already been targeted by Islamist radicals, Muslim teachers are beating up 7-year-old Hindu students, and the state police shot dead a student protesting appointment of Urdu teachers when requirement was for science and Bangla teachers.

While the communist Bhadrolok Bengalis sleep through all these sinister activities, the agenda of educated Islamists, after indoctrinating their young-adults and teenagers, has now reached their toddlers. 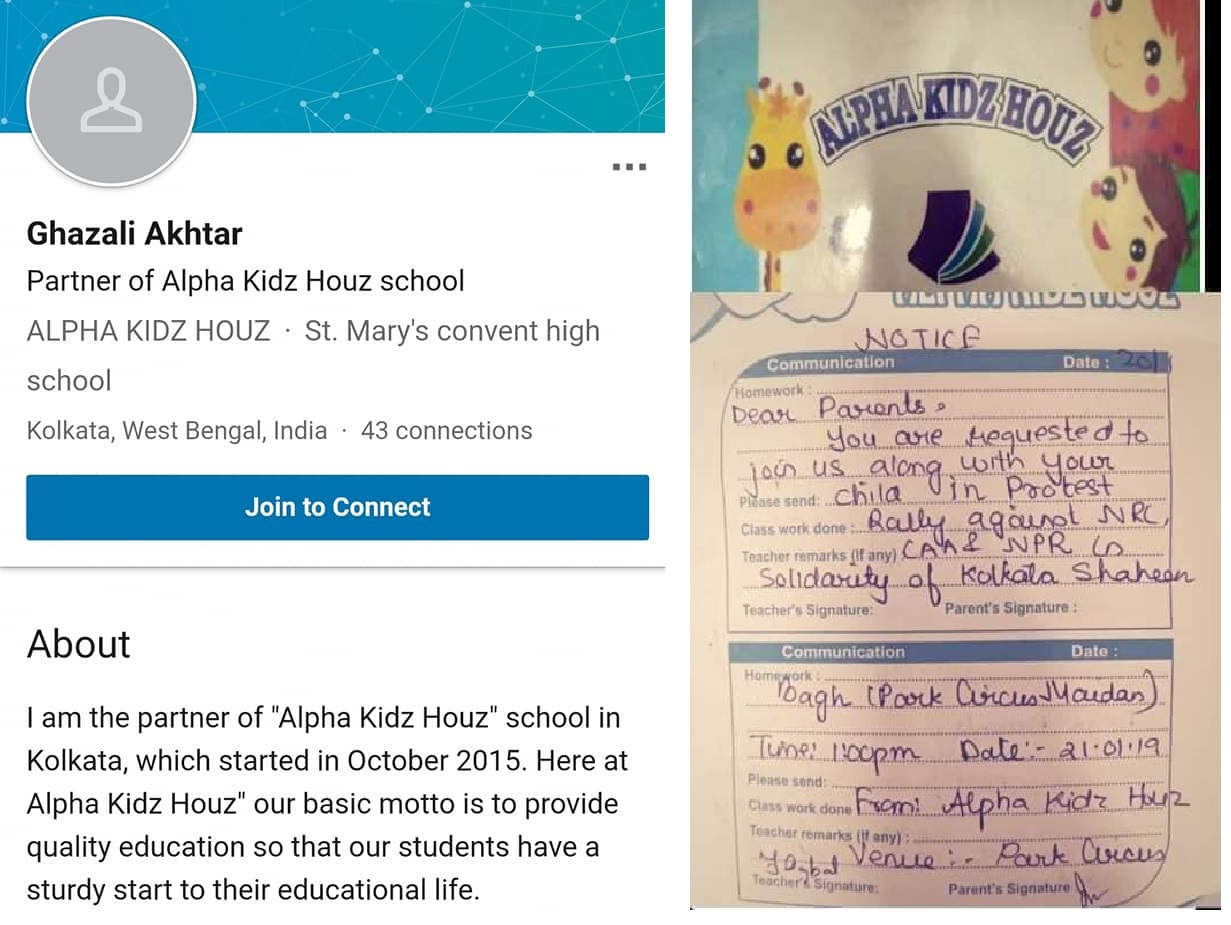 Alpha Kids Houz is a play-school located in Beniapukur, Kolkata and has a decent strength of toddlers coming from all religious backgrounds. Earlier this month, toddlers of this playschool returned home with a notice written and signed by their teacher that called for parents to join a rally organized to protest CAA-NRC. Since the notice generated social media outrage, Ghazali Akhtar, who co-runs the playschool, has now closed her LinkedIn profile.

The handwritten notice issued on the diary of these toddlers read, “Dear parents, you are requested to join us along with your child in protest rally against NRC, CAA, NPR in solidarity of Kolkata Shaheen Bagh.” The venue for the “Kolkata Shaheen Bagh” protest was given as Park Circus Maidan, and the time for the rally was January 21st, 2020.

Why is a play-school like Alpha Kids Houz promoting a rally to imitate the infamous Delhi Shaheen Bagh protest and calling for involvement of innocent toddlers who have no perception of such complex issues?

At an impressionable age that demands nationalism, patriotism, and morality be inculcated in young minds, the play school at Taltala is preparing future citizens to imitate the misinformed women who have been sitting at Shaheen Bagh causing massive inconvenience to other inhabitants of the capital city, and where young kids have been heard chanting death threats for the nation’s PM.

The Shaheen Bagh women have been protesting, allegedly for a daily payment of Rs. 500 to 700 and a packet of biryani, where they had first wrapped a hijab around Maa Kali and then put burqas on Hindu women, all to protect ‘constitutional values’ we are told.

The mastermind of that protest, Sharjeel Imam, envisions another partition of Bharat. He has openly provoked his co-religionists to cut off the ‘chicken-neck’ that connects North-East with the mainland of Bharat. Assam, Delhi and UP police have registered FIRs and levelled sedition charges against him. Is this the role model Alpha Kids Houz wants the future citizens of Kolkata to join and follow?

Kolkata is home to Jadavpur University (JU), another university that is always in news for all kinds of wrong reasons. The metropolitan city has already lost institutions like Presidency College to dirty leftist politics. A play school like Alpha Kids Houz, with Ghazali Akhtar as its co-partner, is shaping Bengali kids to grow into a wasted crop of anti-nationals that despise Hindus, Hindu Dharma, and adulate Islamist ideology. This is how they aim at accelerating the complete Islamisation of Bengal.

Bengalis are not strangers to the horrors of partition. Many parents who send their wards to this play-school may be from families who have come to West Bengal after being persecuted in East Pakistan (Bangladesh). Now whether they want their children to be used as tools to bring about another disaster for Hindus, is for them to decide.