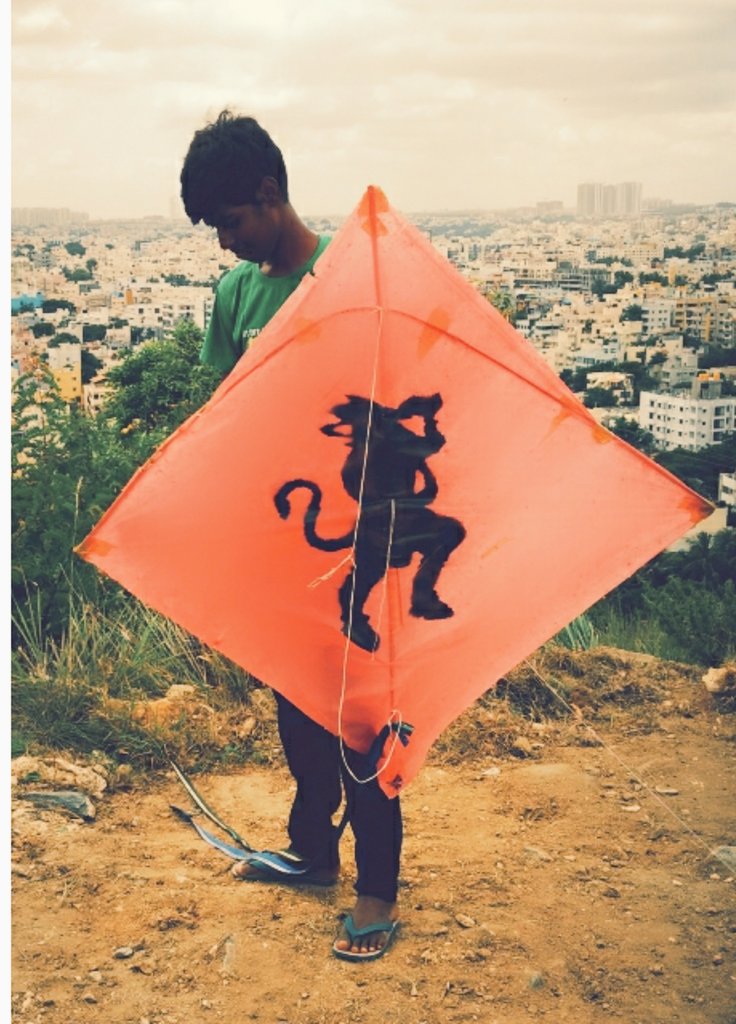 In a first, a kite festival was organized above Hanumagiri betta with Poojas at Veera Anjaneya (Mukhyaprana) and Arkeshwara temples. Ever since the attempt by christians to illegally encroach the lands of Hanumagiri betta temples by planting a cross and renaming it as Annamma betta was reported, various events are being planned to protect the temples at the hilltop which were almost abandoned by the devotees. Further the hill-lock was also encroached by a private firm which started the construction of apartments on the hill-lock. While this news was covered by the mainstream media, large amount of importance was given to the Christians visiting the cross planted illegally on the hill with the presence of the temples being completely ignored.

In order to thwart all these encroachment attempts, happening because of the lack of devotees visiting the temples at this sacred hill-lock, local Hindus planned various activities to attract large number of devotees. One such attempt was the organisation of a kite festival in which people aged between 6-60 participated enthusiastically. The event began at around 9:30 AM with poojas offered to Sri Mukhyaprana and Sri Arkeshwara. Hundreds of people gathered at the temple during pooja to receive the blessings of the deities.

Following this, kites were distributed among the children, who eagerly strung and flew it enthusiastically. Local Hindus brought different designs of kites some of which included the picture of Hanuman portrayed in a saffron kite. Kids were excited on seeing their kites reach the sky as it marked a social gathering and enjoyment which is totally different from the normal lifestyle in the city of Bengaluru where kite flying is a rare activity. Atleast three rounds of kite distribution occurred to ensure that no one visiting the temple were returning home disappointed. Apart from this, most of them also signed the gauraksha petition to ensure that the symbols of Hindu dharma in temples and gaumata remained safe under this current secular minority appeasement cloud of politics in Karnataka.

After about 2 hours, the elders took charge in flying the kites and the children chanted a couple of Mukhyaprana stotras in chorus. By about 12:00 PM after Mangala Aarthi, tirtha prasada was distributed and all of them headed home with a pledge to return next time with more friends. It must be noted that while the temples were having lesser number of visitors, certain christians visiting the hill-lock to pray in front of the cross created nuisance to the Hindus visiting the temples by lighting candles on the way to the temple.

The cross itself was erected at this place around 1950 by a priest of St. Joseph’s Church. But the christian fanatics recently were making several attempts to rename the hill as ‘Annamma Betta’ by establishing a historically baseless story of Annamma, claiming her to be a young girl who committed suicide to save herself from the army of Tipu Sultan, and on whose grave the steel cross is planted. While the Hindus who are largely tolerant in nature, accepted the co-existence of christians on the hillock, some christian extremists coming to the spot created disturbances to the temple.

So the kite festival organised on sunday was of greater importance as it marked the efforts of local Hindus to thwart the attempt of illegal encroachment of the hill through cross planting. Further they have also planned a gathering at the temple on 12th August which marks the third Shravana saturday. On this day, bhajans and annasantarpana will be conducted after abhisheka and pushpalankara to Mukhyaprana and Arkeshwara swamy. Devotees across the city of Bengaluru are requested to take part in this event and make it a huge success.