Will captive elephants in the country, which includes temple elephants and privately-owned elephants be banned? In 2014, a  cabal of international  and national animal rights NGOs, filed a case in the Supreme Court (WP(C) 743 of 2014) seeking a ban, on the grounds of ill-treatment and cruelty. While the matter is still pending in the court,  the influential lobby continues to  march ahead with its sinister motive to destroy yet another edifice of Hindu dharma.

Elephant activists, especially those championing the welfare of temple elephants, and devotees across the country were jubilant when Lakshmi, the temple elephant who was translocated, returned to her home of several decades—the Mannakula Vinayakar Temple in Puducherry.

The sight of a decorated and garlanded Lakshmi ambling elegantly into the temple,  trumpeting in child-like glee and happiness, and cheered by devotees and well-wishers  was  heart-warming. It was  also poignant to watch a video clip in which Lakshmi lies down in her shelter and sleeps soundly—she  was sleep deprived for 30 days when she was translocated to strange surroundings. Sleep deprivation, as many other issues, are not uniquely human but shared across  non human species as well. Thanks to sustained passionate activism for the cause of temple elephants, Lakshmi has been resorted to her home of many years….

However, unlike Lakshmi, her counterparts in other  temples in Tamil Nadu,  face an uncertain future. Their fate is being decided by  misinformed, misguided, agenda-driven and adharmic policies masterminded by a caucus  of vested interests. These  include an influential politician, international NGOs working for animal welfare and so-called wild life NGOs in the country and individuals propped by these agencies—all of whom selectively target Hindu dharma traditions and practices in the guise of  animal rights and humanising the way animals are treated. Their goal, however, is a blanket ban and homogenising local traditions, which eventually paves the way for evangelical take over. From Jallikattu to temple elephants, the way ahead is paved with more potholes than possibilities.

For instance, in 2018, Masini, the 11-year-old temple elephant of Sri Samayapuram Mariamman Temple  in Trichy district in Tamil Nadu, trampled  to death her mahout 48-year-old Gajendran.

“Masini was an abandoned elephant calf who was raised at the Teppakadu Mudumalai  elephant camp in the Nilgiris. Her immunity was  low and  she was grossly underweight. A scared and frightened Masini was severely beaten and poked with rods by her new mahouts  that made cavernous holes on her body and she developed water retention.  In fact, the origin of  mahout is maha yatan, or a person who can ensure compliance from the elephant and make it look like magic. It  takes time  for an elephant to bond with a new mahout and ‘listen’ to his commands,” explains S. Muralidharan, animal welfare  activist, Indian Centre for Animal Rights and Education, (INCARE), Chennai.

The traumatised Masini was translocated by HR&CE (Hindu Religious Endowment and Charitable Endowment) officials to the Veterinary College and Research Institute at Orathanadu, Thanjavur, for treatment.

It’s certainly a truism that in several instances, the treatment is worse than the disease.  According to Muralidharan, the elephant’s flappy ears are  one of the two places where it can receive injections and IV drips (the other being its tail). This, however, needs to be done  carefully and precisely. Unfortunately, for Masini, the callous, ignorant and inhuman ways were used to give her injections and IV resulted  in  her ears getting infected and rotting away. To make matters worse, the dean of the college gave a “bogus” report that certified that Masini was “fit for transportation, either to a temple or anywhere else.”

In the meanwhile, into this gladiatorial arena emerges Antony Clement Rubin, a self-proclaimed  animal rights activist, anti-Jallikattu campaigner  and a member of a powerful and influential lobby, who “seems to have a problem with all Hindu temple elephants.”

He filed a writ petition at the Madurai Bench of the Madras High Court and demanded that Masini needed to be taken away from the temple because she had killed the mahout and other “cock and bull” concoctions about the need for elephants to be restored to their wild habitat.

Over the years, apparently, Rubin’s mission is to translocate all elephants from Hindu  temples  and mutts on the grounds that they are being held illegally and subject to torture and harassment. In 2019, he filed three writ petitions (WP/32313/2019 and WP/32149/2019) which are in various stages of litigation. Co-partnering Rubin  in his mission, is Deepak Nambiar of the Elephas Maximus Indicus Trust, who filed a case to shut down the forest department elephant camp at MR Palayam, Trichy, in Madras High Court which however, was dismissed.

Shocked at the sudden and dramatic developments, Muralidharan got into the legal wrangle as  an impleader in the legal proceedings.

“I did not want Masini to go to the Marakkanam elephant camp being run by  WRRC (Wildlife Rescue and Rehabilitation Centre) at Marakkanam, where the three elephants from the Kanchipuram temple were  kept, abused and used to  beg for donations from abroad,” says Muralidharan, whose brilliant  research-backed arguments resulted in Masini being shifted to the Theppakadu camp for  rehabilitation, where she is currently  doing well.

In 2014, WRRC and several other ‘like minded’ animal rights NGOs, and celebrity  wild life film maker Sangita ‘crypto’ Iyer filed a Public Interest Litigation (PIL) in the Supreme Court that sought to ban captive elephants across the country. However, conflicting data over the number of captive elephants in the country (3000?) furnished by the forest department and  contentious issues such as expiry  of license for captive elephants (there are around 1000 such elephants with expired licenses in the country) resulted in several grey areas. Hence the court postponed a definitive judgement. Currently, the matter is sub judice  or under judicial consideration.

On  May 24, 2020, Deivanai, a 15-year-old  elephant in Sri Subramaniya Swamy Temple in Thiruparakundram near Madurai killed its mahout Kalidas. In a nocturnal swoop, safe from the glare of concerned devotees, officials from the forest department shifted the animal overnight to the Rescue and Rehabilitation Centre for captive elephants at MR Palayam in Trichy. Deivani too had  a history of aggressive behaviour and was reported to have injured a mahout at the camp. Incidentally, the elephant from Assam was leased to the temple for a three-year period,  which expired in 2017.

Are captive elephants potentially dangerous? Vimalan is one of the most experienced and senior mahouts in Tamil Nadu, who belongs to an intergenerational family of mahouts.  Vimalan traces his lineage to his grandfather who was a mahout in the early 1900s. Until 1996, the family members were mahouts at the famous Sri Koodal Azhagar Perumal temple in Madurai. Vimalan’s son, the fourth generation, also carries  on the family tradition.

Vimalan has unique insights into the bond between an elephant and its mahout and the  behaviour of this magnificent pachyderm. According to him, aggressive behaviour of captive elephants can be traced to improper and inadequate socialisation of the elephants in the  crucial early stages.

“It’s just like teaching children. We gradually help them progress from LKG, UKG and upwards. But if you suddenly put a child in Class 10, won’t it create problems? Elephants are just like that. At the training camps, they have to be trained and socialised adequately by the mahouts in charge. Simple commands like getting used to one person at a time. Aggressive behaviour in captive elephants is due to inadequate socialisation and training. Elephants internalise habits, just like us. For example, Masini did not intend to  harm her mahout. She panicked because she was frightened and  accidentally trampled on her mahout. However, as he had fractured his leg, he was unable to respond quickly. After the incident, the poor elephant felt very sad  and upset. If it were destructive, wouldn’t it have also  harmed others who were  nearby?” asks Vimalan.

As soon as Deivanai was  translocated to the elephant camp, Antony Clement Rubin filed an RTI (Right to Information)  in Madurai seeking details about the tragic incident in the temple. The ten questions ranged from  the elephant’s behaviour and other details pertaining to the tragedy. The responses reiterated the aggressive behaviour of the elephant  on earlier occasions. Responses to questions regarding  the installation of CCTV in the area where the tragedy occurred and whether the mahout was under the influence of alcohol indicated  that details were not available and the post mortem report was being awaited.

However, responses to two of the petitioner’s questions are significant. It said that Deivanai’s ownership certificate issued by the Tamil Nadu Forest Department expired on April 29, 2017. To another question whether the shift  to the camp is temporary or permanent, the reply was: the elephant will be shifted back to  Assam. 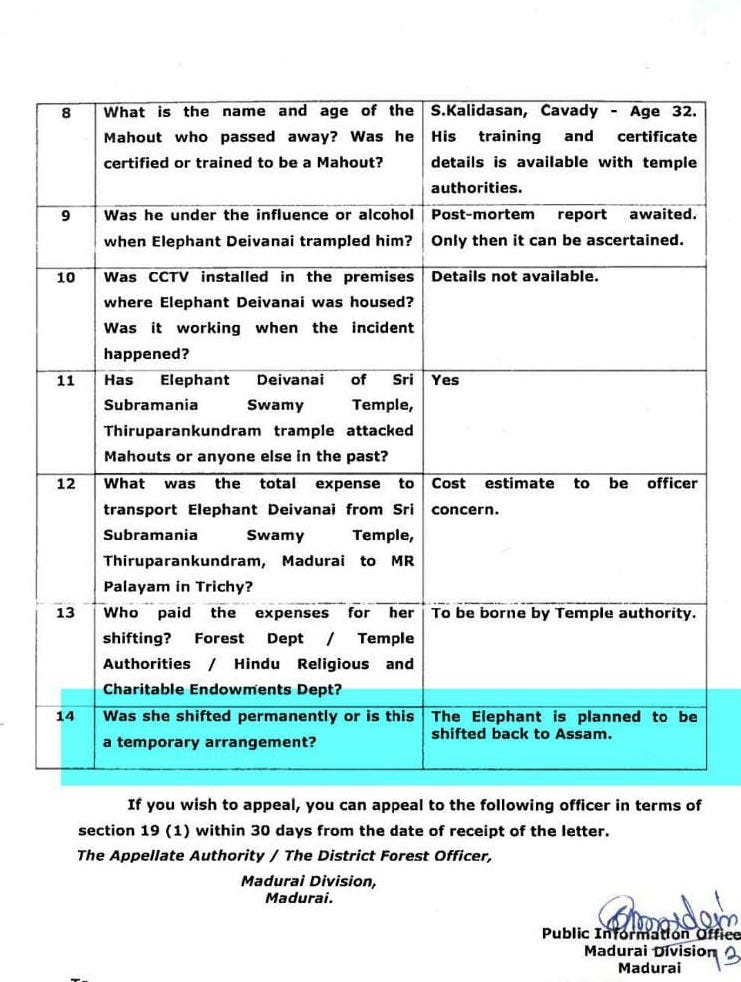 “When Rubin received the RTI , he handed it over to  News 18 Tamil and The Indian Express. Several others will also publish it because it’s a Hindu temple elephant, right? The elephant [Deivanai] came from Nagaland with an  Assam license. At that time money was paid, and it was kept hush hush,”  says Muralidharan.

In one of his Tweets after Lakshmi’s translocation, Rubin tweeted triumphantly, “Kudos to the forest department. Six more to  follow, hopefully!”

The Indu Makkal Katchi (IMK) has expressed its displeasure at the hegemonic interference into the issue of elephants in Hindu temples and mutts by individuals and organisations that are not legitimate stakeholders in this issue.

“When the case to ban temple elephants and private elephants in India is still pending in the Supreme Court, when the matter is sub judice, how did the Madurai DFO give an RTI reply that he is going to move this elephant to Assam? The BJP has to decide whether they are going to save Maneka Gandhi or the temple elephant! But I am going to court, for sure,” declares Muralidharan matter of factly.