Islamic Or Hindu: Which Treatment is Better for Women? 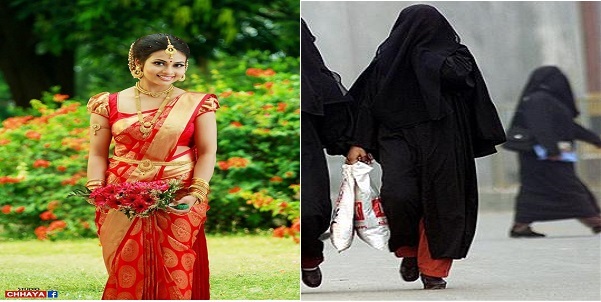 Rafia Naaz, a yoga teacher in Ranchi, Jharkhand is one troubled woman. A fatwa has been issued against her for teaching this art/science. These aren’t rare incidents where a Muslim woman has been accused for following something related to the Hindu Dharma.

Earlier, a young female Muslim singer was harassed for singing a Hindu bhajan. Another similar incident happened with Dangal fame actress Fatima Sana Shaikh when she posted images sporting a bikini. But there is hardly any hue and cry over Muslim men not acting as ‘good Muslims’ – whatever they do, their acts are rarely under the scanner.

This has a lot to do with what is preached by the Imams and Maulvis. There are innumerable videos where these clerics openly talk of beating wives, forcefully getting intimate with her, etc. Ironically, these sad practices are applied only to Muslim women. Why is it ironic, you may ask?

While muslim women are to be emotionally, physically and mentally abused by their husbands, the kafir women are advised to be treated even more pathetically. These non-believer women have to be taken as sex slaves.

The takeaway from this argument is that a Muslim man can do anything with a woman – irrespective of her religion. But a muslim woman has to be covered always. That’s the fundamentalist religion which the global media terms as the religion of peace.

Let’s compare this religion to the Hindu Dharma, which many in the media want to be known as a regressive cult.

In Hindu Dharma, women and men are meant to be treated equally. That’s exactly what the ardhanarishwar avatar means to signify. There’s no core script or religious text which preaches ill-treatment of women or places them below men. There’s no mention of treating non- Hindu Dharma believers in a demeaning manner.