ISKCON At 50: Bhakti Yoga In Action 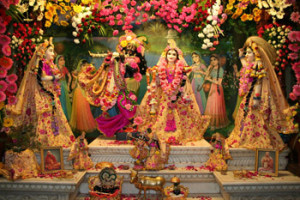 As  ISKCON  (International  Society for Krishna Consciousness) is celebrating its 50th anniversary world wide, the following are excerpts from an interview with Shri Parijat, media in-charge at the  Juhu  ISKCON Hare Rama  Hare Krishna  temple in Mumbai, by Prof. Indira Satyanarayan. ISKCON was founded in 1966 in by A. C. Bhaktivedanta Swami Prabhupada who is worshipped by his followers as Guru and spiritual master.

1) How will you define KRISHNA CONSCIOUSNESS in simple terms?

2) According to you are more people coming under the fold of Krishna Consciousness or deviating from it?

We started in 1966,  and I see a lot more people getting connected with the Bhakti Vedanta movement. About 95,000 devotees have taken the spiritual initiative to join us .  Our temples have expanded from 108 to 660. Everyone is in search of peace and happiness, so more people are joining the Krishna consciousness movement  to achieve it .

3) How can Krishna Consciousness be taught in Schools?

The Government  has initiated spiritual education programs  in schools. We have our Bhakti Vedanta school where we concentrate on Vedic Education. We teach that the Bhagavad  Gita is for the SOUL,  not just for the American or Bharatiya Body.

4) ISKCON  is now completing 50 years. What are the challenges faced by you in these last 50 years?

The greatest  challenge  which we faced was when our Founder Swami  Prabhupada  left us . We felt rudderless  temporarily. However, he  made a proper administrative structure  and governing rules  like  having  the Zonal in-charge  and following the voting system for selecting the temple President. We are following the rules and carrying along with Swami Prabhupada’s  blessings  which is motivating all of us to this day.

5) I understand  that ISKCON is facing a cash crunch in constructing the Kharghar temple in Mumbai.

We are approaching Corporate people for funds. But we are depending on Lord Krishna  to help us  to build the temple .

6) What work does ISKCON do at the grass root level in rural areas?

We have the Bhakti Vedanta  hospital team which visits rural areas and  conducts  medical camps . We do cataract operations and provide employment to the rural poor. We reach out to people during distress situations. When there was the  earth quake in Nepal we sent medical teams. We set up small dispensaries in villages; if anyone needs major surgery we bring the patient to the city for treatment.

7) It is perceived that ISKCON has become more famous abroad than in Bharat. Your comment.

I have stayed in the US for five years .  I firmly believe that  the volume of devotees in Bharat are more than in the United States. About 38 lakhs people are connected with ISKON  through face book  in Bharat.

8) Do you believe that Lord Krishna will be born as Kalki in this world ?

Yes! The Kalki Avatar of Lord Krishna will definitely appear. When, where and how he will look is all mentioned in the Bhagavad Gita.

ISKCON, also known as the Hare Krishna movement, was founded in New York City by AC Bhaktivedanta Swami Prabhupada in 1966. It is the golden jubilee year celebration of ISKCON temples or centres across the globe, and many centers celebrated its three-day golden jubilee over the 5 to 7 February weekend.

Swami Prabhupada was born Abhay Chandra De, who in 1932 became the disciple of Bhaktisiddhanta Sarasvati Thakura. The Gaudiya Vaishnava Society, in recognition of De’s scholarship, bestowed on him the title of Bhaktivedanta — meaning one who has realized that devotional service to the Supreme Lord is the end of all knowledge. Later, he was known throughout the world as AC Bhaktivedanta Swami Prabhupada.

ISKCON belongs to the Gaudiya-Vaishnava sampradāya, a tradition within the Vedic or Hindu culture. Philosophically it is based on the Sanskrit texts Bhagavad-gītā and the Bhagavat Purana, or Srimad Bhagavatam. These are the historic texts of the devotional bhakti yoga tradition, which teaches that the ultimate goal for all living beings is to reawaken their love for God, or Bhagwan Krishna, the “all-attractive one”.

Members of ISKCON practice bhakti-yoga in their homes and also worship in temples. They also promote bhakti-yoga, or Krishna Consciousness, through festivals, the performing arts, yoga seminars, public chanting, and the distribution of the society’s literatures. ISKCON members have also opened hospitals, schools, colleges, eco-villages, free food distribution projects, and other institutions as a practical application of the path of devotional yoga.