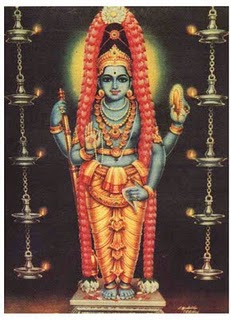 The takeover of temple administration has not only destroyed the temples economically but has also resulted in stopping of many traditional practices and welfare schemes benefitting the devotees of the temple. Let us see one such example in the Koodalmanikyam temple of Irinjalakkuda in Kerala.

Rare are the instances where the Kings have to bow down in respect to their own subjects. However, such a situation existed in late medieval Kerala where local kings like from Travancore and Cochin had to show their respects to a powerful aristocratic landlord named Thachudaya Kaimals. These Kaimals were the owners of Koodalmanikyam temple at Irinjalakkuda region in Kerala and nearby lands.

Koodalmanikyam temple is one of the rare temples dedicated to Bharata, brother of Sri Rama. It is part of Nalambalam, or the four temples associated with the four brothers from Ramayana – naalu means four in Malayalam and Ambalam means temple. The other 3 temples are Moozhikkulam Sri Lakshmana Perumal temple, Thriprayar Sri Rama Temple and Payammal Sri Shathruknha Swami Temple.

The Koodalmanikyam temple was one of the largest land owners in Kerala before the secular state grabbed its lands and distributed it to the laborers who were mainly belonging to the minority communities in the name of socialism. As a result of this, various welfare activities which were once going on in the temple such as oottupura (providing free food to the devotees visiting the temples) had to be stopped. When the secular state distributed the temple lands, it didn’t provide any alternative means for generating the income which can be used to continue these welfare schemes, hence forcing the temple authorities to stop them.

While trying to defend the conversion activities of missionaries, the common point raised by the left liberals is the lack of social welfare schemes provided in the temples. But when only Hindu institutions are targeted in such an unjust manner, the question which has to be raised is whether it’s about Hindu temples not indulging in social welfare schemes through their income, or is the secular state running the temples preventing them from doing so by completely destroying their income?

The lands grabbed by the secular state from this temple has also seen many encroachments. A part of the temple land was allotted to the Christ College and other government institutions to facilitate development activities around the region. While the Church is the largest owner of non-agricultural land in Bharat after the Government, should the temples be made to allot their lands to the colleges of missionaries, further contributing to their possessions? Wasn’t the temple land supposed to be used for the purpose of welfare of Hindus? And if the government has allotted the temple land to the Christ college of Irinjalakkuda in order to promote secularism, is it too much to ask that Christ college to provide free education to Hindus of that region, as the land in which the college stands was actually meant for the purpose of the welfare schemes provided by the temple?

In 1971, with the 26th amendment of the Constitution, the Kaimals completely lost their control over the temple. The Kaimals enjoyed such privileges as they were the owners of the Koodalmanikyam temple, which being one of the largest land owners in Kerala used its income to indulge in many social welfare schemes for the devotees living around the temple. While the traditional Hindu society is commonly accused by the left historians to be one where the upper castes were oppressing the lower castes, the tradition of Thachudaya Kaimal shows that it was purely based on respecting an individual for their knowledge and activities of social welfare, contradicting the claims of liberals.

Cruelly ending such a wonderful tradition in the name of takeover of administration by the secular state, is nothing short of a crime.

Did you like this report? We’re a non-profit. Make a donation and help pay for our journalism