Inside Chanakya’s Mind: Aanvikshiki and the Art of Thinking – Review 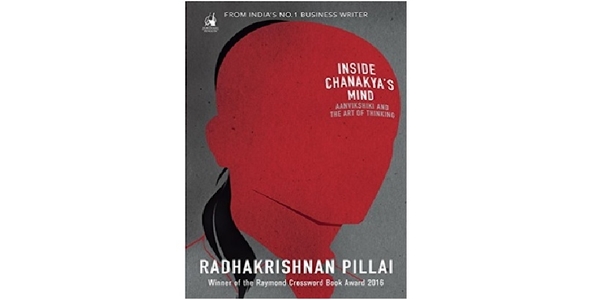 This is a review by Mr. Abhinav Agarwal, of the book ‘Inside Chanakya’s Mind: Aanvikshiki and the Art of Thinking‘ authored by Radhakrishnan Pillai.

The relevance of Chanakya to today’s world has only recently received the kind of attention it deserves. The author’s 2014 book, “Chanakya’s 7 Secrets of Leadership“, co-authored with D Sivanandhan, was perhaps the first mainstream bestseller in this genre. The author’s latest book in the series, “Inside Chanakya’s Mind“, provides many more insights into the mind and thinking of the greatest strategist in the last two thousand years and more.

First off, let’s get the meaning of this word – Aanvikshiki – out of the way. I say “out of the way” because beyond the word is the book itself. It is therefore important to understand what it means. This will allow the reader to understand the book better.

Aanvikshiki is the combination of two words – “anu” and “ikshiki“. “Anu” means atom, while “ikshiki” means “a person who wants to know.“

Interestingly enough, the author also tells us that Aanvikshiki was one of the names of Droupadi.

The very first chapter of Kautilya’s Arthashastra is called “Aanvikshiki Sthapana“. This should give you an idea of the importance Chanakya placed on Aanvikshiki. Chanakya (or Kautilya), was a “master of many sciences, and the master of many kings.” If the wisest and shrewdest-ever practitioner of statecraft since Krishna thought it fit to place so much emphasis on Aanvikshiki, it stands to reason what he had to say on the topic should be of immense interest and relevance even today. It is around this concept and Chanakya’s writings that the author, Radhakrishnan Pillai, has built the book.

Per the author, practicing Aanvikshiki requires one to consider three things:

Let’s take an example. In the chapter, “Types of Thinking“, Dr Pillai starts off with one type –  “Both-side Thinking“. This may be obvious enough to most, but Chanakya sought to deliver this insight through the opening prayer of the Arthashastra itself:

Why is this insightful? If you know your Hindu texts, then you would know that Shukra was the guru of the Asuras, while Brihaspati the preceptor of the Devas. So not only did Chanakya exhort readers to look at both sides of an issue, he also went ahead and named Shukra first – a call to first examine the “counter view first and then the good side.” This was the sage, practical, timeless advice from a master two-and-a-half thousand years ago! Take an example. If you, as the CEO, are contemplating a merger, think of how the target company would look at the acquisition. Consider how your biggest competitor would view this acquisition. Would they tacitly encourage it – a bad sign. Would they go after the target company themselves? What are the arguments against the acquisition? Only then consider the reasons in favor of the acquisition.

Similarly, there can be more than one solution to a problem. Of course! you may think. Even here, what was Chanakya’s advice? “Sama, Dana, Bheda, Danda” (साम, दान, दंड, भेद ), sometimes also referred to as “Sama, Daama, Danda, Bheda“. Basically, Chanakya writes in 11.1.3:

“He should win over those pf them who are friendly with conciliation (sama) and gifts (dana), those hostile through dissension (bheda) and force (danda).”

In the same vein, how do you ascertain the integrity of your trusted employees? Chanakya prescribed four tests – the test of loyalty, the test of lust, the test of fear, and the test of material gain. Yes, loyalty is indeed an important facet of business strategy. For some leaders, loyalty is sometimes the overriding and only aspect that matters. That is possibly a mistake. The four tests however would be relevant to almost any modern-day organization.

If you are talking of strategy and Chanakya, then talk of chess cannot be far behind. Sure enough, Chanakya, in book ten of the Arthashastra, talks of chess in the context of war. Business is war by another name, and while war in ancient times had chariots, horses, elephants, and soldiers, if you consider these as metaphors for resources in today’s world, then business strategy is all about the optimal utilization of these resources. I felt this section was worthy of a lengthier exposition. In fact, there is a whole book lurking in this metaphor. For instance, what do you take elephants to represent – your cash reserves, your most profitable business unit, your patents, or something else? How do you position these “elephants” against an adversary? How did a Microsoft position its elephants against a Google? How did Maruti position its resources when faced with a resurgent Hyundai a decade ago? Perhaps this is an idea for a future book that Dr. Pillai may write!

In closing, I liked the book, and I will recommend it. I want this book to become a success, to be read by as many people as possible. It is an important book, on an important topic, and with a very Bharatiya context. All these should make it an automatic selection for almost every manager. But, I will also say that I felt the book missed at least two ingredients required for making the book successful and “sticky”.

Sticky – as in making the book “understandable, memorable, and effective in changing thought or behavior.” The Heath brothers outlined the formula for stickiness as one that followed SUCCESs in their blockbuster bestseller, ‘Made to Stick‘ – Simple, Unexpected, Concrete, Credible, Unexpected, and Stories.  Most of all, the “Stories” part was missing. Anecdotes, concrete examples would have elevated this book from the good to great.

On the other hand, the book allowed me to view Chanakya from a different perspective. It provided insights that I, or almost any other lay reader, may not have had without reading the complete Arthashastra. Even with a reading of the Arthashastra, I would probably have been unable to extract the same insights as the author did without having to spend considerable time reflecting on the text. The author, Radhakrishnan Pillai, has done all that for us.

(This review has been reproduced from author’s Blog with his consent.)