Mujeeb Mohammad, a senior software architect with Infosys, has been terminated by the tech giant after gaining overnight notoriety for his Facebook post encouraging people to “join hands, sneeze with open mouth in public, spread the virus.” His last profile picture contained the message, ‘Spread The Word, To End The Wor(l)d’.

Mujeeb Mohammad, a Sr. Technology Architect with Infosys Technologies asked people to sneeze in public & spread the Virus. He has now been terminated by @Infosys

Infosys had initially said that it was a case of mistaken identity but after public pressure for a deeper investigation, it concluded that the message had indeed been posted by its employee and Mujeeb Mohammad was duly sacked in line with company policies.

The social media post by the employee is against Infosys’ code of conduct and its commitment to responsible social sharing. Infosys has a zero tolerance policy towards such acts and has accordingly, terminated the services of the employee. (2/2)

But individuals sharing Mujeeb Mohammad’s mentality are not that rare as one would imagine. Shabeen Ali Zaidi, who is employed as a Product trainer of Hyderabad based mid-sized software company Focus Softnet, seems to have been using his lock-down time in spreading Islamists fanaticism, hate against Hindus and propaganda against the Union Government.

In one of his Facebook posts, Zaidi accuses the government of using the Coronavirus as a ‘tool to empty the demonstrations at Shaheen Bagh’. A global pandemic has claimed tens of thousands of lives worldwide, and to safeguard Bharatiya citizens from the virus the government has called for a national lock-down. This lock-down will cost the entire country enormous economic losses, but Government has held citizens’ lives paramount. And here we have an ‘educated’ citizen who, instead of supporting the government at this time of national emergency, has accused it of deceiving citizens. The exact same conspiratorial & delusional mindset was exhibited by illiterate & semi-literate Muslim women gathered at Shaheen Bagh. What does it say about the indoctrination levels in the Muslim community that even educated middle-class youth are spouting such garbage?

A 10 minutes scroll through Zaidi’s Facebook account will leave anyone shaken at the level of religious fanaticism and bigotry. Hating the government is one thing, but Zaidi goes a step further and displays a shocking hate for Bharat as a whole in one post. Coronavirus being Allah’s punishment for the world’s alleged misdeeds against Muslims, directly leads to the thinking that Muslims are immune from the virus – a dangerous fallacy which has taken deep roots in the Muslim community, despite the extremely high proportion of Muslims in the COVID19 cases recorded thus far in Bharat.

The government has allocated Rs. 15000 crores to rapidly scale up health infrastructure to fight the COVID19 pandemic. It has announced a relief package of Rs. 1.7 lakh crores to provide free ration and other benefits for the poor and needy who will be hardest hit by the lockdown. But for radicalised minds like Zaidi’s, such measures are meaningless and they can only spew venom irrespective of what the Government does – so he claims that the only provision made for fighting COVID19 are ‘plates and bells’. He is insinuating towards the PM’s clarion call for applause at 5 PM on the day of Janta Curfew as a sign of gratitude towards our health workers, police etc. The PM didn’t claim that the contagion would be cured by beating plates and bells, and neither did the masses believe so. It is appalling that ‘educated’ youth, employed as product trainers with software companies, fail to comprehend a straight and uncomplicated message. 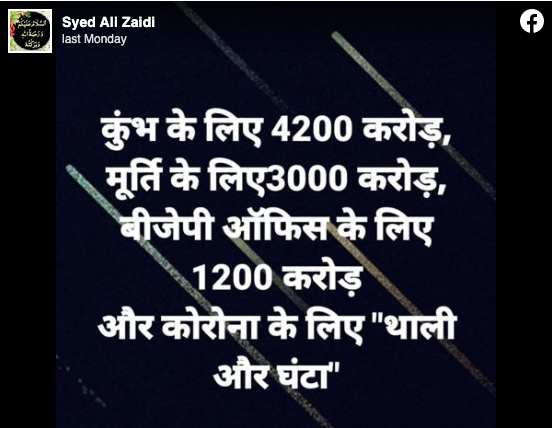 The Islamist bent of mind is apparent when he compares medical masks that can protect against infectious diseases like Coronavirus to the religiously-mandated clothing like hijab and niqab worn by Muslim women. Does Zaidi seriously expect everyone to believe that the face veil niqab was recommended to safeguard Muslim women against infectious diseases, whereas the Quran and Hadith mention the veil is a measure to avoid arousing males while stepping out in public? Will Zaidi and other men like him also start wearing the niqab now? 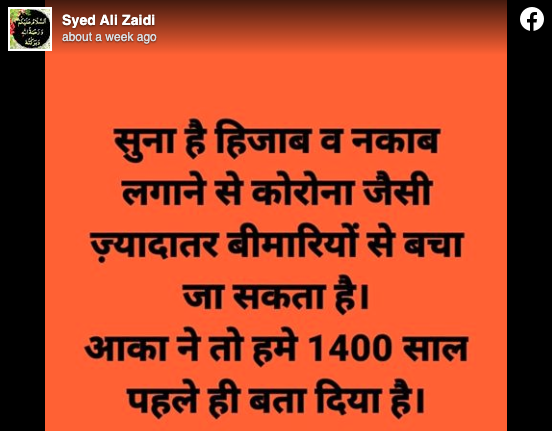 The hate for Hindus shines through in the standard ‘Gau-mutra’ slur directed at ‘bhakts’, whom Zaidi advises to leave Bharat and go to Nepal. This is the language of terrorists like Adil Ahmad Dar, the Pulwama suicide bomber. Zaidi is also upset that initial reports indicated that IB officer Ankit Sharma, who was murdered by AAP councillor Tahir Hussain’s goons during the anti-CAA Delhi riots, received 400 stab wounds while it was ‘only’ 12 stab wounds according to him. In any fluid situation like a riot, it takes time for full details to emerge. Initial reports about Ankit Sharma’s gory death ranged from 400 stab wounds to 200 injuries, before he was tossed in just his underwear into a gutter.

Finally, even Hinduphobic portals like Scroll and The Print were forced to admit that the IB staffer suffered 51 injuries including –

Is this barbaric enough for Shabeen Ali Zaidi?

He proves himself to be not just Hinduphobic, anti-Bharat, but also a coarse regionalist who in his acute hate of Gujaratis has forgotten that Mahatma Gandhi and Sardar Vallabbhai Patel were also Gujaratis. But then again, one can understand why razakars like Zaidi would be upset with Sardar Patel who launched Operation Polo to end the genocide of Hindus started by the separatist Nizam of Hyderabad and to integrate princely state of Hyderabad into the Bharatiya Union. In normal course, such bigotry is dime a dozen on Facebook and other social media platforms and can be ignored. But such hate-filled and misleading fallacies at a time of national crisis can be very damaging and must not be overlooked.

In today’s day and age, social media has evolved into an important medium of information dissemination. Keeping a check on the virtual enemies of collective social wellbeing is vital. The “moderate” masks of Islamists who are constantly looking for avenues to channel their hate must be ripped off. It’s high time we fight these rabid elements, who, instead of standing shoulder to shoulder with society, scavenge on a global crisis.