A battle has been raging in Aleppo, the largest city in war-torn Syria, as part of the ongoing Syrian civil war for over 4 years now. This week that battle entered a decisive phase, with Syrian Government forces at the verge of recapturing Eastern Aleppo, an area till recently held by rebels. There have been reports of a humanitarian crisis as civilians get caught in the crossfire, which triggered a twitter trend #IndiaWithAleppo by Indian Muslims few days back to express solidarity with people of Aleppo.

On the face of it, #IndiaWithAleppo sounds like a commendable case of people commiserating with human suffering elsewhere, but scratch a little deeper and it reveals a lot about the conditioning of the Indian Muslim mind.

What is the Syrian conflict?

The civil war in Syria is being fought between the Syrian Government forces under President Assad (an Alawite, a sect of Shia Islam) who is supported by Russia and Iran, and a group of Sunni extremist ‘rebels’ backed by Saudi, Qatar, Turkey, US  – prominent among these rebels is the Al-Nusra Front, formerly al-Qaida’s Syrian branch. IS (Islamic State) is also fighting against the Syrian Government, but they are in control of other parts of Syria (not Aleppo). Although IS has clashed with Al-Nusra at times, both organizations and their common backers share the same end goal – overthrow of the Syrian regime and establishment of a Sunni Islamist government.

This map explains the current situation on the ground in Syria and Iraq, with respect to the different players and the territory they control – 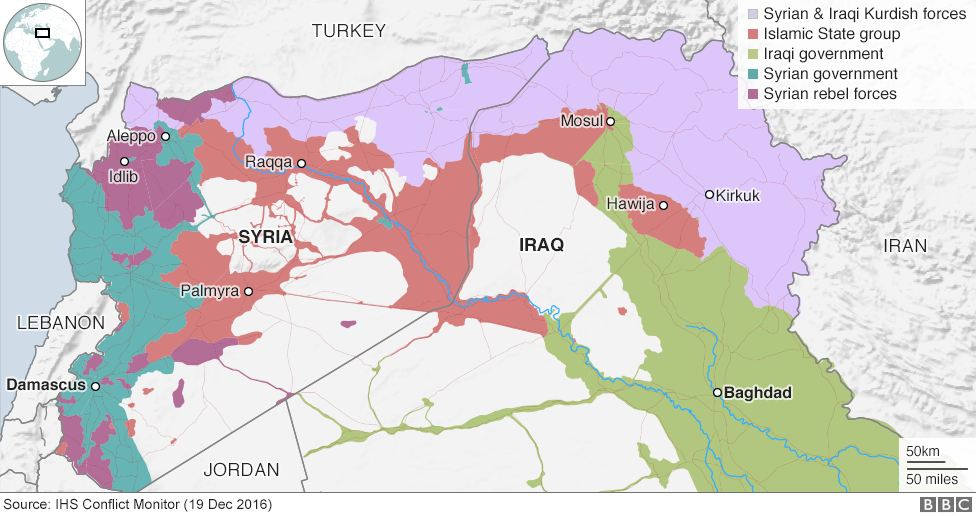 Lebanese American scholar Nassim Nicholas Taleb, who is no fan of President Assad, explains the Syrian Conflict in one propaganda free chart – By all accounts, the so-called ‘moderate rebels’ are an extremely vicious group of terrorists who have flouted every civilized norm and are especially barbaric in their treatment of minorities. Assad is no saint, but is clearly a better option than the likes of IS and Al-Nusra.

There is no denying the civilian casualties and suffering as the Syrian forces entered rebel-held Easter Aleppo – a humanitarian corridor has been opened for evacuation of civilians, and there are reports of a new deal per which civilians and fighters will be allowed out of east Aleppo in return for evacuation of people from rebel-besieged towns.

But contrary to the narrative being peddled in Islamist circles and by Western media, the ‘rebels’ are no heroes and allegedly murdered civilians who tried to leave  – use of civilians as a shield is a common tactic by terrorists and was also used by LTTE in the final stages of the Sri Lanka civil war.

Here are some of the #IndiaWithAleppo tweets –

#Aleppo witnessing the era of Jahiliya#IndiawithAleppo

Remember that day when God will ask u about theses crime on innocent ppl & He ll put u into the blazing fire. #IndiaWithAleppo @suhelseth

As bad as the situation in Aleppo might be today, the decade old conflict in Syria and Iraq has seen far worse atrocities against civilians, chiefly at the hands of the dreaded IS (Islamic State) – no one has suffered more than the Yezidis who have been murdered, raped and even minor girls sold into sex slavery. Innocent Muslim civilians in Yemen are dying due to the indiscriminate Saudi bombardment which is nothing short of a war crime.

Did these Indian Muslims, organizations like SIO (Students Islamic Organization) and Lucknow civil society elements expressing solidarity with Syria, criticize the murderous terrorists who are fighting the Assad regime. Before blaming the West, Russia & Israel for all the ills of Muslims in the Middle East, did they ever stop to criticize Saudi Arabia – the fountainhead of Islamic fundamentalism, exporter of radical Islamist ideology and financier of groups like Islamic State?

These are not poor, illiterate Indian Muslims, but educated, tech-savvy Muslims from places as diverse as Hyderabad & Bengaluru who are supporting a pan-Islamist cause like that of ‘freeing’ Syria & Palestine and establishing Islamist states there. They idolize Muslim quasi-dictators like Turkish President Recep Tayyip Erdoğan –

Thanks @RT_Erdogan . We as a nation will remember your support whenever, In Sha Allah we get Freedom#ErdoganSupportsKashmir

This ‘Muslims vs the rest’ thinking has always had deep roots in the psyche of Indian Muslims – we saw it even in the 1920 Khilafat movement when Indian Muslims (led by likes of Ali brothers and Maulana Azad) put pressure on the British government to preserve the authority of the Ottoman Sultan as Caliph of Islam following the breakup of the Ottoman Empire at the end of World War 1. So while Hindus participated in the non-cooperation movement against the colonial British to fight for Swaraj, it was the religious passion and sympathy for the Islamic Caliphate that drew Indian Muslims in.

Weaning Indian Muslims out of the influence of pan-Islamic extremism and dangerous ideologies like Wahabbism & Salafism should be a priority for our society and Government.

We need more Indian Muslims like this Facebook user who is willing to look within and acknowledge the shortcomings of Islamic societies worldwide, rather than always blame the other –