‘In the footsteps of Rama, Travels with the Ramayana’ – an unputdownable book! 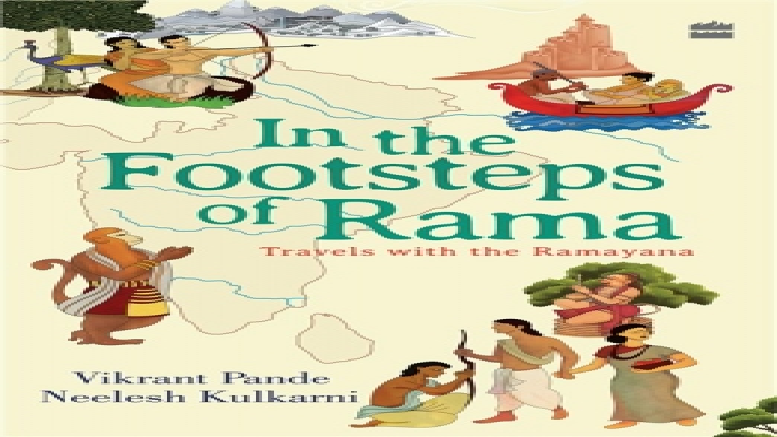 Most people would claim reading and traveling are two of their hobbies, but reading a travelogue is not exactly a cup of tea for most people. And expectedly, most readers were skeptical to read the book when recommended. ‘I started the book expecting only to get through the first few pages, at best. However, I finished the book in two days! It was unputdownable!’

For the armchair traveller as well as the enthusiast for epic tales, this is a wonderful book with which to revisit the world of the Ramayana.

‘In the footsteps of Rama, Travels with the Ramayana’ is no ordinary travelogue. It is co-authored by Vikrant Pande and Neelesh Kulkarni and published by HarperCollins (Price: Rs 599).

Vikrant Pande and Neelesh Kulkarni’s quest to retrace the trail of Rama’s fabled travels during his years in exile began with their trying to locate Chitrakoot on the map and realizing that they had little idea where it might be. Curious about the places mentioned in the Ramayana, they set off on a journey of their own, following Rama’s route from Ayodhya to the Dandakaranya forest and Panchavati (near Nashik) and on to Kishkindhya (close to Hampi), Rameshwaram and Sri Lanka.

‘In the Footsteps of Rama’ will take you on a wonderful journey of history, myth, culture and architecture. You also learn about the many wonderful human beings who are keeping the faith alive by giving up worldly pleasure and are more than happy to serve in devotion and pass the knowledge onto curious tourists. The book will instill a new faith and leave you with a desire to see the places for yourself and experience what the authors and many pilgrims would have.

Along the way they would discover how closely the narrative of the Ramayana is linked to local folklore, and how the stories of the Ramayana and the moral framework that binds them together still speaks to the people who live in the land across which Rama, Sita and Lakshman made their journey.

They explore the places of significance, visit different temples, meet various people, and try to extract different stories and theories about Ram and his Vanvasa. The book is an interesting travelogue featuring mythology amidst the present-day milieu.

Let me share with you the reasons why I recommend this book:

1. The book is full of local tales and fables which are entwined with the Ramayana. Many of the stories are new. Many of us have heard of Ramayana only from seeing the television serial made by Ramanand Sagar. Some of us have read parts of Ramcharitmanas but we don’t know most of the stories. So, when one reads different stories and gets new perspectives and insights, it really makes the reading very interesting and adds a new dimension to the story that we have always known.

2. The authors have used a language which is lucid and free flowing. The descriptions are so vivid that you feel that you are travelling with the authors. Also, streaks of humor in the narrative puts a smile on your face often. The authors have travelled and experienced themselves. This is what makes the book charming and the anecdotes interesting. The stories are told with a lot of research and are authentic as the authors have compared them with other Ramayans.

3. The writing style is uniform, which I find very interesting because not one but two authors have written this book. I was expecting to see two different styles and that would have made reading a bit tiresome for the readers. However, the authors have managed to keep a uniform style throughout the book and I must compliment them for this. This is a unique book with two authors collaborating to write a single narrative. But the tone and tenor does not jar and it looks like it was written by one person only.

4. Reading this book, I felt very proud to belong to this country where we have such rich heritage. It made me proud of my Hindu roots too.

5. I never really gave much thought to the two epics. Never pondered, whether they really happened many years ago or not. However, after reading this book, it strengthened my belief that the epics are not a figment of someone’s imagination but they did really happen and perhaps a large extent of it is true.

6. It is an excellent read for everyone who loves to read or loves to travel. Also, for people interested in mythology, this book is a gem!

7.The hardbound beautifully designed cover makes it a collector’s item. The pictures tell a story themselves and are placed along the route of the journey.

8. There are many interesting aspects of Ramayana which I did not know of. For example, the whole concept of Lakshman Rekha I came to know is not there in Valmiki or Tulsi Ramayana. Also we had all believed the Shabari ate the berries to taste them before offering them to Rama. This too is a new fable and not part of the original Ramayanas. I believed Rama and Sita left for Vanvaas immediately after their marriage but the authors say that they left after spending 12 years in Ayodhya. There are many such things I learnt.

9. I liked the part where the authors travel to Sri Lanka as it is very descriptive and picturesque. The caves and the tunnel system in Sri Lanka which the Ravana army used is fascinating.

10.The book swings back and forth, from the epic era dialogues to authors’ narratives, but the authors seamlessly stitch each piece together to keep the story line firmly on track. And one is constantly hooked on to the book with a curious sense of anticipation as to what is coming next!

The exploratory and experiential way of writing is refreshing and makes the reader travel with them. It’s amazing to see how our country is endowed with places which actually speak of the tales we have been brought up with.

‘In the Footsteps of Rama’ traces the journey of Rama and Sita, immersing the readers in mysticism. I hope the authors do a similar book on other Indian epics. It will bring us closer to our rich heritage!

In the end I would strongly recommend everyone to read this book. It is available on all online bookstores.