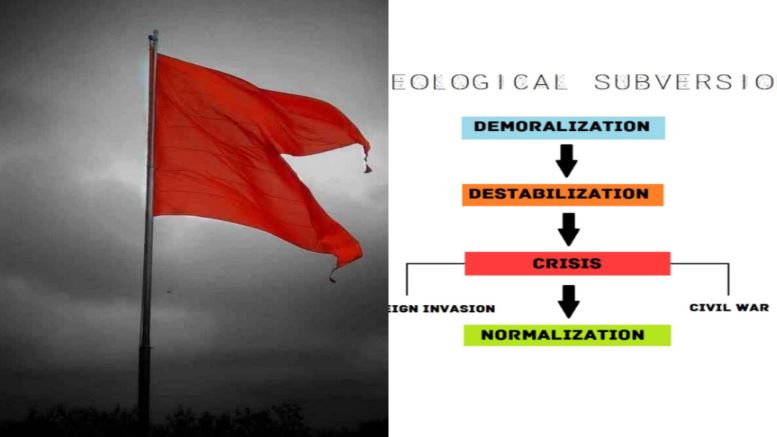 Ideological subversion is a Marxist psychological warfare tool used to change perceptions or thinking patterns among an enemy country’s populace in such a manner that the nation is weakened from within thereby making it easy to be won over. KGB agent, who later defected to USA, Yuri Bezmenov in his 1984 interview explained how the concept is set in motion through four stages ultimately resulting in a Marxist takeover.

Bezmenov’s father was a high-ranking Soviet official and was himself a trained elite KGB overseas operative. He also worked at the Soviet RIA Novosti news organization, editing and planting propaganda materials into foreign media. He had been taught the template of penetrating a society with Marxist ideals to trigger the collapse of the society from within.

In fact, he put this template to work in Bharat by attempting to infiltrate the country so as to make Bharat a party to the Warsaw pact. While in Bharat, he was tasked with gathering information on important public personalities such as intellectuals, writers, teachers, and social activists among others who could be used as propagandists to brainwash generations of Bharatiyas with Marxist-Leninist ideologies.

So, when Bezmenov said in 1984 that the free society of America would be taken down by the communists without firing a shot, he knew exactly what he was talking. It was not just a warning to America but to every sovereign democratic nation that was at risk of falling prey to Marxist takeover. The collapse of a free society takes place in four stages, namely demoralization, destabilization, crisis, and normalization.

What is ideological subversion?

Bezmenov says that 85% of KGB’s time, money, and manpower is spent on ideological subversion and only 15% on intelligence gathering. To put it in the simplest of terms, ideological subversion is a method to make native populations ashamed of valid and valued traditions including religion, history, heritage, and culture. Disrupting governments by any possible means, spreading disunity among citizens, and turning younger generations against older ones are some of the principles of ideological subversion that KGB has borrowed from Sun Tzu’s book Art of War.

What Bezmenov predicted with respect to America holds true for Bharat too where an attempt is being made to subvert the Hindu society particularly since 2014 and with renewed efforts since 2019 when Bharat chose Hindu nationalism.

Let’s take a detailed look at how the Hindu society is being subverted:

Demoralization of the Hindu society begins right from our history textbooks that has been distorted at the hands of Marxist historians who were put in charge of the education system sometime in the 70s. Bezmenov says that it takes 15-20 years for the process of demoralization to set in. We have far exceeded that time limit which continues to be reflected in the way doctored history is taught to generation-after-generation.

Despite a so-called nationalist government in power for the past 7 years we are yet to correct the textbooks although the HRD ministry had announced a review of the curriculum. Let alone correcting the falsification of history, NCERT has now gone ahead and introduced woke lessons in the curriculum.

It isn’t just through education but HINOs (Hindus in name only) and Marxist-Islamist grip is seen in the entertainment industry as well. This should be a greater concern to the Hindu society since youngsters tend to emulate their on-screen ‘idols’. Hindudvesh that was subtle earlier such as depicting pandits and thakurs as villains is now open and direct as was seen in movies such as PK.

Filmmakers aren’t just normalizing Hindu hatred but taking it to unacceptable heights in the name of ‘creative license’. By assaulting Hindu rituals such murti puja, a direct attack on Hindu Dharma is being launched by those who are being used as vehicles to subvert Hindu society.

The aim is to make Hindus believe that there is something inherently inferior about their culture, religion and civilization.

Once a society is demoralized and cut off from its roots as well as traditional values, it is destabilized using various means. Bezmenov says the process of destabilization is spread over a 2-to-5-year period. In the context of the Hindu society, this is being done through movements such as Dravidianism, urban naxalism, and even insurgency movements that we are seeing in areas North East.

The political ideology of neo-Buddhism is also on the rise which is being used to attack Hindu Dharma. The neo-Buddhist radicals are so brainwashed that we recently saw them tearing down the saffron flag atop a Hindu temple in UP’s Farrukhabad. Similarly, we are witnessing how Dravidian ideology has been promoting anti-Hindu content in Tamil movies or how Hindu temples and institutions are being destroyed by HRCE.

As Shri Rajiv Malhotra had pointed out there is a deep-seated conspiracy to divide the Hindu society for which Marxist-Leninist-Maoists are using regional fault lines. Essentially all these ideologies are sowing hatred for Hindu Dharma in the name of identity politics.

Sub-nationalism is being normalized with the help of urban Naxals who have managed to capture important positions in academia and media. We have seen federalism promoting dangerous movements such as the insurgency being witnessed in Kashmir and North East among other regions. In fact, a war against nationalism is being waged using the smokescreen of federalism. All of these anti-national movements are destabilizing the nation thereby weakening the society.

A crisis can be triggered within 2 to 6 months. It also helps in creating a sense of disillusionment with the present form of government (read democracy). Ever since independence, the country has simply been limping from one crisis to the next. Pakistan-sponsored terrorism has been one of the biggest banes of Bharat. Add to that communist-sponsored terrorism that we have been dealing with for decades.

However, since 2014 we are seeing constant attempts at triggering a national crisis under the pretext of ‘saving the constitution’ and social justice. The desperation that was seen among anti-Hindu elites when a Hindu nationalist Modi was elected in 2014 has only increased since the BJP and PM Modi came back with a greater majority in 2019. The anti-CAA protests followed by the farmers’ protests are clearly attempts at creating trouble for the government of the majority and thereby delegitimizing that choice.

Bezmenov says in the stage of normalization, the traditional values are replaced by Marxist-Leninist ideas that become the new normal. Once a society is cut off from its roots, as we are witnessing in the form of deracinated Hindus, it becomes easier to make them submit to the ‘new normal’ where traditional values are viewed as outdated and a burden. The after-effects of American left-wing ideas such as black lives matter and critical race theory will be seen in the next couple of decades.

Aman ki Asha is a result of a group of HINOs who think that a country that was born out of hatred for Hindus and continues to persecute its Hindu minorities will want to extend a friendly hand. Normalizing the anti-Hindu mindset and accepting the dehumanization of Hindus, this bunch of elites and HINOs simply look the other way when Hindus are being persecuted in the sub-continent. However, they would always be the first to register their support for movements such as black lives matter.

The only anti-dote to such subversion of the Hindu society is rooting the country in Dharma. Deracination is at the root of all problems and tackling that is essential if everything that’s valuable to the Bharatiya and Hindu civilization is to be saved.