Many have been arrested in the Rasipuram (Salem) baby sale racket that’s been going on for 30 years. Tamil Nadu CBCID is investigating the case and has arrested more than ten people involved in the issue including nurse Amudhavalli, the main accused. Amudhavalli, a government nurse, was involved in selling babies of tribal people of Kollimalai. The seriousness of the issue demanded CBCID’s involvement. After investigation they have arrested the following:

The beautician Rekha ‘who had allegedly been a go-between surrogate mothers who lend their embryos for a fee to help childless couples conceive through in-vitro fertilization techniques and potential parent-clients, had sourced babies from Amudha and allegedly sold them to affluent childless couples in Bengaluru’ says Deccan Chronicle.

All of them have been put in Salem Central Jail.

There is a need to wonder whether missionaries did an experiment through ‘save the girl child’ campaign. Portuguese tested the method of using their soldiers to impregnate local women to see whether their offspring can be loyal.

In the case of Mose Ministries, it makes one wonder if they bought the girl children promising to save them, brought them up as loyalists and made them do ministry work in the 25 years they possessed them. Most of the babies sold were girls which strengthens this suspicion as missionaries are known to target girl children because only through women does culture flourish. Women pass on traditions from one generation to the next through the process of birthing and bringing up children.

In a similar baby sale racket that took place in 2001 in the states of Tamil Nadu and Andhra Pradesh, a pastor, Krupakaran was arrested from Kollimalai, the same region that is in the news today for the Rasipuram baby sale racket. At that time, the following individuals were said to be involved in the case and some of them were arrested.

The Hindu reported that ‘The arrest of the two Chennai-based criminals led the case to Singapore, where a woman, Ms. Kaveri, the owner of `Lotus Child Adoption Agency’, was said to be the kingpin of the racket. The police later found that she used to get children either by abducting from houses/hospitals, buy from poor parents or take up orphans and street children. She utilised the services of two Chennai-based ‘sisters’ Usha and Vasantha for taking care of the children when the visa and passport were being readied. In the case of abducted children, these women used to act as their mothers for passport and other purposes.’

What is to be noted here is the arrest of a pastor, Krupakaran, from Kollimalai. In the Rasipuram case also a pastor named Ponnusamy from the same place has been arrested. The Singapore based woman Kaveri is actually Alice Kavaree, the owner of Lotus adoption agency. Why does such a small region like Kollimalai have so many churches? There are around 50 churches. Non-catholic churches count the most in this number. Most of these get foreign funds. So there is reason to suspect that maybe they are involved in the baby sale racket for years. 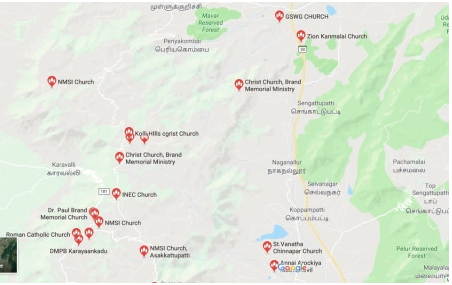 It is surprising that such a small place needs so many churches:

Which churches pastors Krupakaran and Ponnusamy come from cannot be found, as media was and is hiding that detail.

It is well known that the TN government’s cradle baby scheme was used to acquire infants who were then sold to Mose Ministries. What happened to the accused pastor Gideon Jacob who was arrested in that case? The proceedings are unknown. How is it possible that these kind of things happen in Periyar’s land where Periyar is the God? Maybe the government employees did this with his blessings.Amudhavalli said that she has been selling infants for 30 years with “God’s grace”. We don’t know who is the ‘God’ here. Church’s involvement is clear on considering both the 2001 and 2019 cases. Is the ‘God’ the Dravidian politicians who rule the state, or Jesus Christ or Jehovah or someone else?

Statistics of 2015 say that 6,877 cases have been filed on child trafficking/lifting alone. This issue is rampant in West Bengal, Maharashtra, Andhra, Karnataka and Tamil Nadu mostly. More than 20 people were lynched because of child lifting rumours.

The Home Ministry informed that 55,000 children were trafficked in 2016 alone. Even more shocking is the fact that it was a 30% increase compared to the previous year. From Delhi alone, 2100 kids seem to have gone missing. Home Ministry report says that only 40% of the child lifting/kidnapping cases are recorded and only a measly number of children were rescued.

(This post first appeared on the Tamil blog christianityindia.wordpress.com and has been translated by MahaKrishnan)

Rafique Siddique held in Lucknow for threatening to abduct and forcefully marry minor girl, driving her to suicide