Hindu Dharma on its Last Legs in Jammu & Kashmir 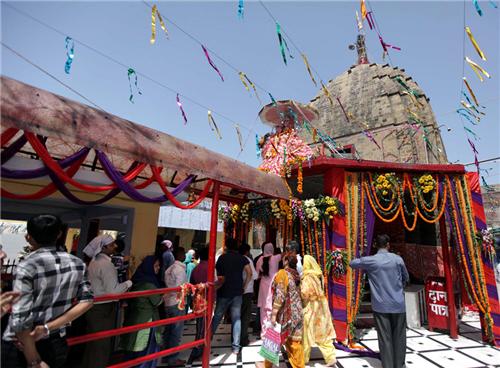 I visited Jammu after several years and I was astonished to see the considerable change in its landscape. Hanging carcasses of goats, sheep can be seen in several Halal meat shops spread across the city. Along with Halal shops, shops selling Kashmiri handicrafts, embroidery, dry fruits have come up in every nook and corner of the city. Muslim vegetable sellers from UP have replaced many Hindu vegetable sellers and Bengali Muslims can be seen selling mattresses.

The fast changing landscape of Jammu city is evidence to the changing demography of the state. Fifteen years ago, people of Jammu used to wake up hearing temple bells. Hindus enjoyed Bhajans and aartis that could be easily heard from the temples that dot the city. The old temples are still there, but the sound of temple bells is now lost under the sound of Azaans that are broadcast by the numerous mosques that have come up in and around the city. Exclusive Muslim colonies such as Sidhra, Bantalab, Bathindi, Khanpur in Nagrota, etc. have come up where Muslims of all the regions of the state and other states have settled. And all this does not bode well for the Hindu minority of the state.

The rising Muslim population in Bharat is a grave concern for many Hindus, but here it is not just a case of rising Muslim population in the region. Any rapid increase in the population of any community could be easily addressed by having a robust population policy and Bharatiya state has miserably failed in this regard for fearing of losing Muslim votes. The changing demography in Jammu region is not a simple case of natural increase in the population of Muslims, but a deliberate attempt by the Muslims to convert hitherto Muslim minority regions in the state into Muslim majority regions. It speaks of the callousness of the administration and collusion of the successive governments to engineer a demographic change. It is this phenomena that have made Hindus of the region nervous.

We all know that Hindus of Bharat cannot purchase land and settle in J&K due to the special status that has been granted to it. Kashmiri Muslims opposed setting up of temporary camps for Amarnath pilgrims in the valley. We also know how Kashmir based organizations of all kinds vociferously opposed the rehabilitation of native Kashmiri Hindus in separate townships. Forget about Hindus of Bharat, if Kashmiri Muslims oppose settlement of Hindus of the state (Kashmiri or Dogras) in the valley, they have no right to build separate townships in Jammu.

Wait, those of you who are still skeptical that this could be a part of a carefully designed strategy, below is a specimen that proves the same. A grand mosque in the heart of the city within the premises of Old BC Road Govt quarters speaks volumes about the official sympathy for a certain section of society. The mosque, perhaps 16-year-old, stands tall on a property that belongs to the government. The property has residential quarters for secretariat employees and we know that secretariat employees are a mix of different religious denominations. The questions that secularists and media professionals should have raised years ago are like this: Why did the government of the day in a secular country build a mosque on its own land? If the government did not build the mosque, who built it and was permission sought for the same? Why did the government allow the construction of the mosque on its land? Would the current government prove its secular credentials and dismantle the mosque that has come up on its land?

Elsewhere in the state, one can see forest land being encroached by land grabbers. For example, while travelling by a bus from Jammu to Udhampur, it is easy to notice vast green tracts of land that once added to the picturesque beauty of the Trikuta hills, have now been occupied by Muslims. At some places, the slopes of the hills have been levelled and converted into plain corn fields. Similarly, the areas surrounding the Tawi banks have been encroached by Muslims. The shrinking forest land should be a major concern for all ecologists. As I have not travelled through the length and breadth of the state, I cannot say if Hindus too have grabbed forest lands at any place, but even if that is true, the government of the day should not have allowed it to happen.

Illegal Bangladeshi and Rohingyas have been settled in the state and the successive governments have shown no resolve to deport them. Terrorist organizations and separatists have issued warnings that there would be huge consequences if Rohingyas are deported. It is also a common sight to see Muslim beggars from Maharashtra, Rajasthan, UP, Bihar, etc. seeking alms on the streets, specifically on Fridays. And these beggars are not involved in any trade or employment. So, what was it that motivated them to come to Jammu?

On top of it, the current PDP-BJP government’s decision to make the knowledge of Urdu mandatory for gazetted and non-gazetted jobs has put Hindus in a catch-22 situation. If they refuse to learn Urdu, they would be deprived of many jobs and if they choose to learn it, it would lead to cultural decimation. The case of Kashmiri Hindus is living testimony to it. Kashmiri Hindus use many Urdu words in their daily lives instead of Hindi. The forcible imposition of Urdu on masses has already started showing signs of cultural decimation. Many Hindus of Jammu can be seen addressing each other as Jenab instead of Jee. This policy of language imperialism should be opposed by Hindus tooth and nail.

Unfortunately, most of the Hindus are not realizing the damage which learning of Urdu could do to their Hindu roots. Urdu acts as a unifying force among Muslims and it is this language that helped Muslims to create Pakistan. The push given to Urdu will pull Hindi backwards and I wonder if this is the way BJP government would build Hindu Rashtra. The government could have easily solved the language conundrum by having Dogri in Jammu, Ladakhi in Ladakh and Kashmiri in Kashmir. That would have been the real face of a secular government. Alas, it seems that there is a deliberate attempt to increase the Islamic footprint across the state, irrespective of which party occupies power. So, one is bound to feel nervous and disturbed over the developments in the state.  With broken heart, I say that the future of Hindus in the state is very dark.