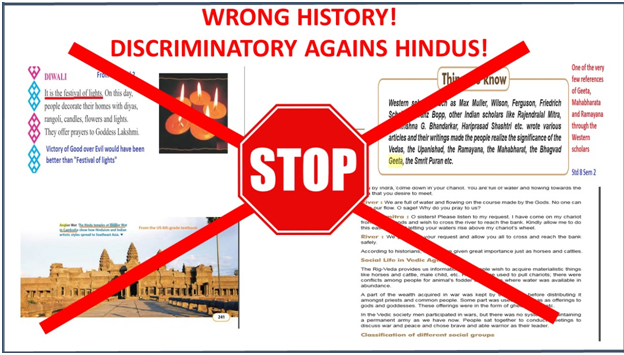 Recently, after learning about the controversial textbooks from California, I became curious to know what is being taught in Bharat. I picked Gujarat as a starting point. I read standard 1 to 10 (Gujarati and English medium) social science textbooks.

I was shocked to see the absence of religious study; especially Hindu Dharma. In other words, it was not articulated properly. I found, Gujarati textbooks to be worse than the California textbooks as far as Hindu Dharma is concerned. My first reaction was that; probably the education board is trying to stay away from the potentially controversial religious matter behind the name of so-called secularism. Which is understandable, however, it is not true either!

After looking at the detailed coverage of some other religions in the same textbooks, I am kind of lost and wondering why the Hindu Dharma is left-out from the school curriculum. Why the majority religion which is followed by 88% population of Gujarat is left-out!

Why is it the case, that in the birthplace of “Sanatana Dharma”, state school boards go out of their way to control the information being published and spread, by suppressing the history of the land? Is it not the national motto of Bharat: “Satyameva Jayate”? Then why is the state engaged in spreading untruths, and half-truths?

Bharat’s thousands of years of history including pre-historic era as well as the Golden era are totally ignored and the books literally start from 606 CE. Surprisingly, not much about ancient Bharat and Bharat’s glorious time is covered (refer this Wikipedia link  for an idea of the vastness of Bharat’s civilizational history).

Beside random references here and there, religious study; especially of Hindu Dharma is very much untouched or not articulated properly. The word “Rama” for God, is not used even once!  There was only one reference of Gita, three references of Ramayana, and that also as simple words; without any elaboration.  These are the core of Hindu Dharma and Bharat at large for centuries. Some explanations are a must.

Basically, Hindu Dharma is pretty much ignored! No explanation of what is Hindu Dharma, its belief system, its value systems! In short, students graduating from Gujarat would have no formal understanding of what is religion in general, what is Hindu Dharma etc. In fact, I wouldn’t be surprised to see the same narrative in other states as well. There are minute comments on the Vedas and Upanishads, but largely ignoring the crux!

We all know that the Hindu Dharma, Buddha Dharma, Jain Dharma, and Sikh Dharma have the same roots.  This type of explicit clarification would have been fair, complete and would help to build a strong solidarity between these religions.

In other words, students in their prime time of understanding would grow up without an important component of the world; which is religion in general! Ironically, it is not true either as I do see good coverage about “Buddhism” and “Jainism” in standard 6. This is welcomed.  I am happy to see at least something about our 2 beloved religions!

However, I can’t find even two complete sentences explaining what is Hindu Dharma, its core value, teachings and belief systems! Nowhere from grades 1 to 10! The majority students who are Hindus would grow without knowing their own heritage. Just like Buddha Dharma and Jain Dharma, similar coverage should have been there for the Hindu Dharma and other religions in order to be fair and for completeness! That is what real secularism is all about! All or none! Rest is pseudo-secularism. I wonder why the majority religion, Hindu Dharma, is left out!

FEW EXAMPLES FROM THE GUJARAT TEXTBOOKS:

Look at the figure below. The textbook is using the Western scholars to make us realize the significance of Geeta, Ramayana and Mahabharata! It is kind of an insult to thousands of year old Hindu scriptures.  Hindus are teaching Geeta to the world and not the other way around!

Nice explanation and teachings from Buddha Dharma! These kinds of teachings from other religions such as Hindu Dharma would have been fair in a secular country! Most importantly, wondering what is wrong in saying Buddha was born in a HINDU family? No harm there. It would simply help students in connecting the dots. It would help to make a stronger Bharat.

Books certainly fail to do so. 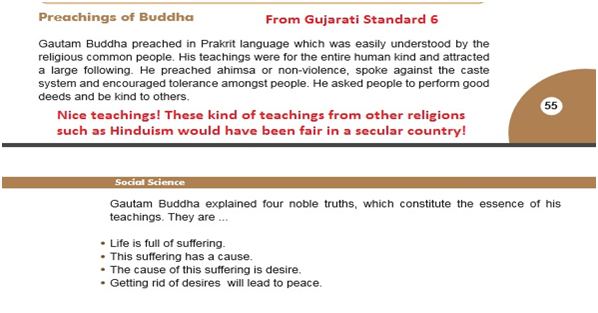 Unfortunately, there is little to none. 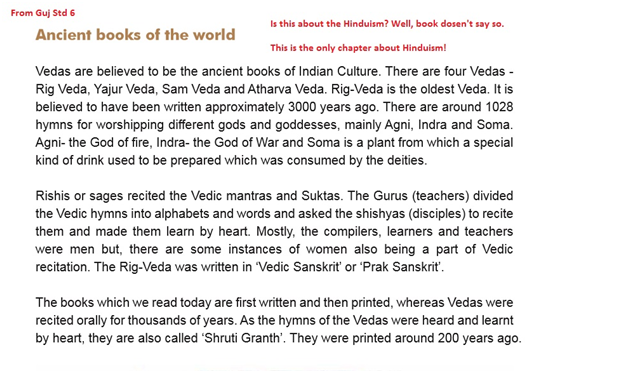 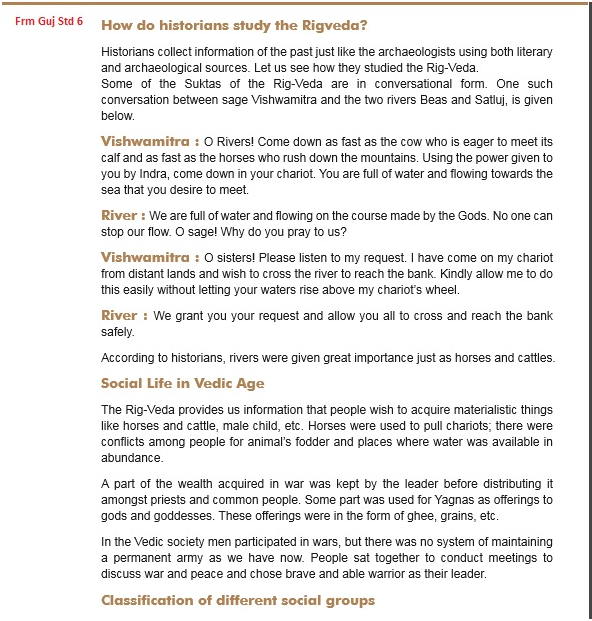 IS THIS THE ONLY EXPLANATION OF HINDU DHARMA IN GUJARATI TEXTBOOKS?

Really! The Vedas and Upanishads have no ties with the Hindu Dharma? Are they not a part of the Hindu Dharma!? If so, then what is wrong in using “HINDU” word with Vedas? Explaining Vedas without Hindu Dharma is incomplete! It’s like introducing son without using his father’s name.

DIWALI AS PER GUJARATI TEXTBOOK!

Diwali is explained as “Festival of Lights” in a standard 2 book. “The Festival of Lights” is a popular phrase in Western countries for the past few years. “Victory of Good over Evil” would send a stronger message! Most importantly, there should not be any hesitation in saying Diwali is a HINDU festival or the biggest HINDU festival. That’s the real truth. The book seems to be shying away from using the word “HINDU”; in fact, very persistently throughout all books! Contrarily, the book has no problems using “Jainism”, “Buddhism”, and “Islam” words. It seems minor, but an important concern.

GRATEFUL TO THE INVADERS!

I do not see a similar praiseful language and appreciation for hundreds of old beautiful architectures and temples! The table below shows how many time important words were used.

Finally, I read some American textbooks to see what they teach about Hindu Dharma. And, this is what my first reaction was:

Whereas the school books in Gujarat left-out Hindu Dharma and glorifies invader Mughals who, in fact, carried out looting, atrocities, destruction, and mass killings!

Let me make it crystal clear. It is not my intention to denigrate Bharat’s textbooks and praise American books. I am also not implying that Bharat should copy American books. American books do have some (but less than Gujarati books) controversial materials about Hindu Dharma and are already being challenged in the US courts. But it is very shameful to see a horrible situation of the majority religion in own land!

Introducing Mahatma Gandhi ji, and Swami Vivekananda without using a “Hindu” word or “Hindu Dharma” cannot be an innocent error.  Not using the “Iron-man” word for beloved Sardar Patel cannot be forgotten matter. Connecting Ashoka with Buddha Dharma, but not with Hindu Dharma cannot be a mistake. Not saying Buddha was born as a Hindu cannot be historian’s ignorance!

Labelling Islamic architectural structures as Islamic but not labelling Hindu architectures or temples with the word Hindu cannot be secularism.   Asking us to praise invaders like the Mughals, cannot be a misunderstanding. Focusing more on the horrible period of Mughals rather than a golden era of ancient Bharat cannot be a mistake. Manipulating truth and hiding facts cannot be a policy.  Providing no-truth to half-truth cannot be a mistake.

One error can possibly be a mistake. Even a few mistakes can possibly be mistaken too; however, persistent mistakes with one theme cannot be mistaken! It is most likely a deliberate and systematic effort! It seems to be a well-thought plan not to teach Hindu Dharma and for that matter not to teach Buddha Dharma and Jain Dharma correctly. The Author’s intentions seem to be to break common links and close ties among these 3 religions.

The Author’s intentions seem to hide greatness of Hindu Dharma. I smell an evil motive here.  Keeping students in dark or misguiding them is a serious crime. The book hurts sentiments of the 1 billion+ Hindus across the globe.

WHAT CAN BE DONE NEXT? HERE ARE THE SUGGESTIONS:

The above discussion very clearly indicates that Bharat’s social science books require major reforms; they need to be re-written.  Social science should articulate the historical facts (nothing but the facts) in a way that the students become more knowledgeable and feel proud of their religion, community, country, heritage, and the world at large. Hiding or keeping them in the dark from the facts of life does not make them good citizens.  The school curriculum should be designed to allow students to observe societies dissimilar to their own in such a way as to broaden their understanding of people and places in an increasingly interdependent world.

I understand religions are the most controversial and sensitive subjects; however, while the world is suffering because of extremist religious influences, people do spend a good amount of their time in religious activities, and hence keeping students ignorant about religion is not a good idea. Well, covering two religions and not covering other religions makes this hypothesis wrong! So, back to the important question; why is one religion i.e. Hindu Dharma discriminated throughout the whole education system?

In the absence of a formal study in schools, students would pick-up wrong and one-sided, biased religious ideologies. They become vulnerable to be influenced by extremism. This could potentially create hatred among people from different faiths!

Until we have an alternative way to provide a value based and character building education system, the basic religious study is essential. It is possible to teach religion without favoring any particular faith! Different religions can be explained without violating secularism.

Schools should provide the value-based and neutral knowledge about religion in general. The Schools should provide the high-level (basic) introduction to all major religions of Bharat. Students should be aware of value systems, teachings, and belief systems of different religions. Students should at least be exposed to the factual components of different religions.  It is better to stay away from the imaginations, stories, fantasies, negativism, and controversies. Emphasizing the common teachings and/or common links of various religions could make students more open minded and tolerant!  For example, while explaining Jain Dharma, Buddha Dharma, or Sikh Dharma, it would be worth mentioning the fact that they all originated from the Hindu Dharma! It would help to create a strong bond between these religions. The books have till now failed to do so.

As a concerned and a well-wisher Bharatiya, we are DEMANDING A FAIR REPRESENTATION OF HINDU DHARMA AND BHARAT IN GUJARAT SCHOOL TEXTBOOKS from the Gujarat State Govt.

We also have an online petition for public awareness and to get their support.

I request everyone to sign this petition and undertake similar exercises to analyze and campaign for updation of the school curriculum in their respective states.