Forest as a Metaphor of Hindu Dharma 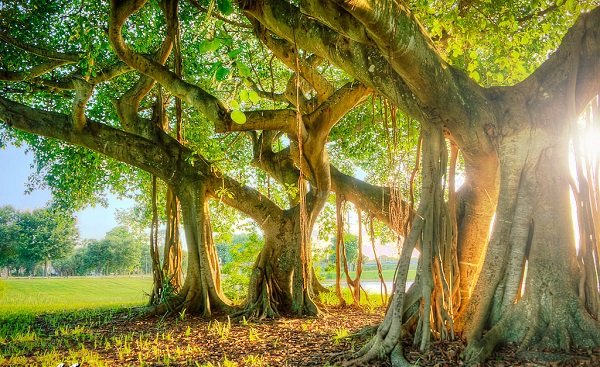 An apt metaphor to describe the Hindu worldview is that of a forest. Forests have always been a symbol of beneficence in Bharat, and embody many of the same qualities as Indra’s Net. In the forest, thousands of species of animals, plants and microorganisms exist in a state of mutual interdependence. At any given level of the forest, the microcosm is always connected with its enveloping macrocosm; there exist many worlds-within-worlds, which are never separate or isolated from one another.

All the elements of a forest are immensely adaptive to one another, and easily mutate or fuse into new forms over time. In Bharat, a forest suggests fertility, plurality, adaptation, interdependence and evolution. The forest loves to play host, and is never closed to outsiders; newer life forms that migrate into it are welcomed and rehabilitated as natives. The growth of a forest is organic; new forms of life co-exist without requiring the destruction of prior ones. The forest has no predefined final end-state. Its dance is ever-evolving. Dharmic thought, analogously, is largely based on this kind of openness and blending.

The forest’s diversity is an expression of God’s immanence—God is manifested as bird, mammal, plant, and many other creatures. Just as infinite processes are constantly under way in the forest, so there are infinite ways of communicating with God. Indeed, Hindu Dharma’s spiritual outlook rests on this very principle: that the divine is immanent and inseparable from life and nature in all its forms.

The forest, like the human body, provides a context for describing complex relationships. In the forest of dharma traditions, multiple texts and rituals flow into each other in complex ways, defying any attempt to classify them with rigidly linear chronologies. Dharma traditions took root on the banks of rivers with sacred waters flowing, their currents being symbolic of constant change and evolution. The experience of endless organic evolution characterizes all our texts, deities, rituals, spiritual practices and festivals. The idea of an ultimate harmony underpinning this vast mélange of elements arose from the forest and its interwoven nature.

As a people, the descendants of forest dwellers can be expected to have inherited a profound respect for nature, as well as an ingrained regard for all its creatures. This stands in stark contrast to the desert-originated Judeo-Christian idea that God made the world for humanity’s dominion.

Some of the earliest Hindu classics are called aranyakas, or ‘forest discourses’. Rishis, the exemplars of Hindu thought, are also known as ‘forest dwellers’. Among the stages of life advocated for individuals, the penultimate one, in which the individual severs the bonds of family to pursue spiritual goals, is termed vanaprastha, which literally means ‘the forest stage of life’. Sri Aurobindo uses a forest analogy to show some essential differences between Bharatiya and Western traditions:

“The endless variety of Bharatiya philosophy and religion seems to the European mind interminable, bewildering, wearisome, and useless; it is unable to see the forest because of the richness and luxuriance of its vegetation; it misses the common spiritual life in the multitude of its forms. But this infinite variety is itself, as Vivekananda pertinently pointed out, a sign of a superior religious culture. The Bharatiya mind has realized that the Supreme is the Infinite; it has perceived, right from its Vedic beginnings, that to the soul in Nature the Infinite must always present itself in an endless variety of aspects. The mentality of the West has long cherished the aggressive and quite illogical idea of a single religion for all mankind, a religion universal by the very force of its narrowness, one set of dogmas, one cult, one system of ceremonies, one array of prohibitions and injunctions, one ecclesiastical ordinance.”[i]

A related metaphor is that of the banyan tree, beloved in myths and stories across Asia. The banyan is unique among trees in that the branches sprout and bow down to the ground, becoming additional roots of the same tree; each root contributes nourishment and stability to the entire tree, forming eventually into a trunk in its own right. The tree is a single structure but functions like a complex, self-organizing network, providing shelter and nourishment to birds, beasts and humans. Its multiple roots, trunks and branches represent multiple origins and sources. They are all part of the same living organism, even if the complexity of the whole cannot be comprehended at a single glance. Each of the separate roots feeds every trunk, and hence every leaf is connected to the entire root system. The tree has no well-defined center, because its multiple roots, trunks and branches are all interlocked and inseparable. It is, in effect, polycentric.

The forest and the banyan tree may be seen as metaphors for context-based cultures, and they help explain why people living in such cultures are comfortable with pluralism and complexity. Such metaphors are commonly found in Bharatiya narratives.

(This article is an excerpt (Pages 7-10) from the book ‘Indra’s Net: Defending Hinduism’s Philosophical Unity’, written by Rajiv Malhotra, published by HarperCollins Publishers Bharat in 2014. Published after permission from author.)