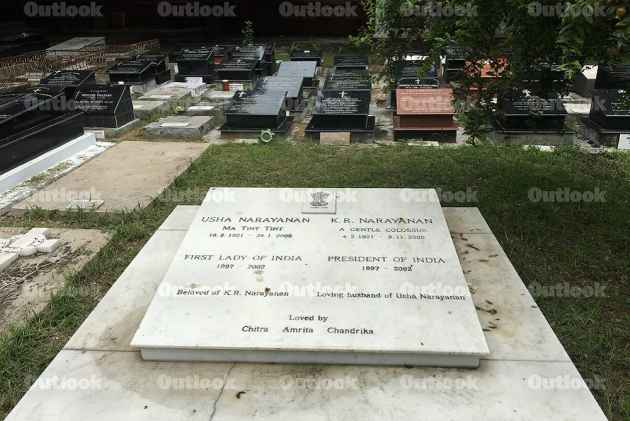 An important event in the history of the democracy of Bharat occurred in Delhi on 25th July, 2017 as Ram Nath Kovind, the second person from SC/ST background took charge as the President of Bharat. Kovind was preceded by K. R. Narayanan, who was the first Dalit President of Bharat. K. R. Narayanan was from the southern state of Kerala. After being sworn in as the President, he became a personality admired by the world leaders.

The evangelist conversion lobbies which have indulged in many mischievous conversion activities have not even spared a great man like him, even after his death. It is revealed that K. R. Narayanan has a tomb alongside his wife Usha Narayanan in a cemetery run by the Delhi Cemeteries Committee on Prithviraj Road.

Ironically, the funeral rites of K. R. Narayanan by cremating his body in the Hindu way was performed by his nephew Dr S. Ramachandran at a spot between ‘Shanti Van’, the memorial of Jawaharlal Nehru, and ‘Vijay Ghat’, that of Lal Bahadur Shastri. So how did the remains of K.R. Narayanan, the first Dalit President of Bharat who was officially cremated on the banks of Yamuna according to Hindu rites in 2005, end up in a tomb in a cemetery exclusive for Christians in Delhi?

Rev. J. Rebello of the Catholic church, who is also the chairman of Delhi Cemeteries Committee, told Outlook “The burial happened because the Christian pastor of his wife, a protestant, could have vouched that Narayanan is a Christian.”

Narayanan did not officially wish that his body should be buried after death in the Christian way. Coming up with a clarification over this issue, the eldest daughter of K. R. Narayanan, Smt. Chitra Narayanan, a former IFS officer, told Outlook, “The burial was done according to the wishes of her mother (Usha), a Christian”. But the former President’s cousin Smt. Seethalakshmi in her interview with Janam TV has told that the family members had no idea about the presence of Narayanan’s tomb in Delhi. She even went on and said that the former President’s wife Smt. Usha Narayanan, who was a Burmese, became a Hindu after their marriage.

This totally contradicts the clarification of Rev. J. Rebello given to Outlook wherein he says, “The burial happened because the Christian pastor of Narayanan’s wife, a protestant, could have vouched that Narayanan is a Christian.. The church has no problem in burying the ashes, the Pope too has allowed it. But the person has to be a Christian”.

This clearly shows that the Christians have resorted to the act of building a new tomb for K. R. Narayanan in a cemetery exclusive for Christians to gain fame using the former President through his Christian wife, the Christianity of whom is also in doubt for she became a Hindu after her marriage with Narayanan according to his relatives.

Even if she was a Christian, how can the ashes of her husband, who was not a Christian be buried along with her in a cemetery exclusive for Christians, paving way for the rise of false claims like the one now being made by Rev. J. Rebello? Is it legal to Christianize a person who is dead by burying his ashes in a Christian cemetery in this secular country?

Incidents like these show the rising influence of Christian evangelical lobby and their never ending thirst for conversions, which doesn’t even spare a deceased former President of Bharat.