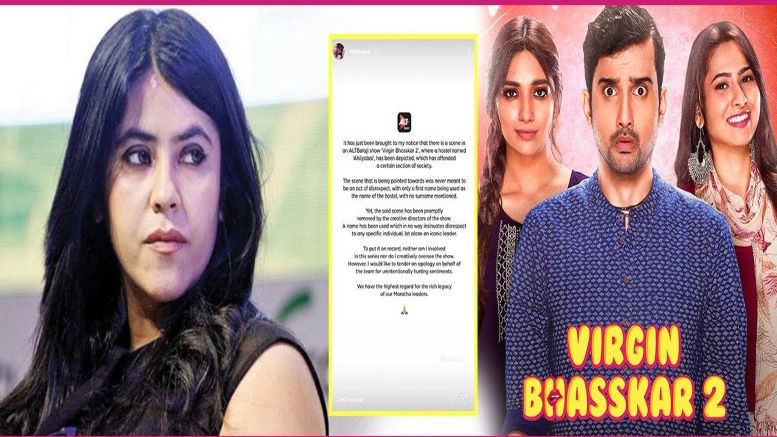 Ekta Kapoor’s web series for their platform AltBalaji and Zee 5 has insulted Hindu icon Punyashlok Ahilya Devi Holkar who is held in high regard not just for standing up for Hindu rights as a true Kshatrani but also for her service towards Hindu Dharma and its revival.

Dr. Mahatme has requested the minister to take appropriate action taking into consideration the sentiments of the citizens of this country who venerate Ahilya Devi Holkar and also to ensure that the image of the inspirational leader is not tarnished through such shows.

Punyashlok Ahilya Devi Holkar was the daughter-in-law of Malhar Rao Holkar who established the Holkar kingdom at Malwa. She was widowed at a young age and took over the reins of the kingdom in her hand after her husband passed away in 1766.

She was known not just for her wisdom and administrative ability but also for serving the Hindu cause by rebuilding several Hindu temples, provided facilities for pilgrims, and renovated several ghats. This she did not only in Maheshwar, her capital, and Indore but also all over the country. Indeed, famous temples broken by Aurangzeb including Vishvanath and Somnath were rebuilt by her. Her works can be seen in Kashi, Gaya, Somnath, Ayodhya, Mathura, Hardwar, Kanchi, Avanti, Dwarka, Badrinath, Rameshwar, Jaganath Puri and various other places throughout the country. All this makes her a true national icon.

She fought many wars while personally leading armies into battle. By her efforts, Holkar state had become so powerful that it could not be defeated by British even in Second Maratha War! Despite all these, her residential quarters very very humble and can be seen even today in Maheshwar.

She was the only woman who was ruling a large state in 18th century Bharat, and did so admirably well. There can be no better example of women empowerment and Hindu idea of gender-equality. In fact, her life can be cited against the colonial propaganda of women oppression in Hindu society.

Associating the great ruler’s name with a sex scandal site is not just inappropriate and insulting but also disrespecting her contributions towards the country. Since OTT content is not regulated such derogatory content, targeting young adults who are at an impressionable age, gets aired.

In this regard, both Zee 5 and Ekta Kapoor are repeat offenders. Their scant regard for national icons in general and Hindus, in particular, has come forth the time and again. Readers may recall how Zee 5 had provided a platform for the Tamil web series “Godman” that demonized Brahmins and promoted Hinduphobia.

After criticism of several web series, there was talk of many OTT platforms signing a ‘self-censorship code’. But clearly, as ‘Sacred Games’, ‘Ghoul’, ‘Leila’, ‘Pataal Lok’ and now ‘Godman’ show – Hindu bashing and demonizing Hindu Dharma is considered par for the course by many ‘creative’ people involved in the film & entertainment industry.

It is time for the Government’s I&B ministry to crack down on such Hinduphobic content. Targeting of a particular community and the intent to malign Hindu religion is as clear as daylight, yet such content is increasing by the day while opponents deride the Modi government for ‘fascism’!

And now they have added “nationalism-phobia” to their Hinduphobic agenda whereby they have taken it upon themselves to insult national icons through overt and covert means; be it army, freedom fighters, or erstwhile rulers.

The Defence Ministry (MoD) stepped in and wrote to the CBFC (Central Board of Film Certification) objecting to the distorted representation of the men in uniform after Martyrs Welfare Foundation (MWF) raised strong objections against the show stating that it had insulted the army and military men by depicting scenes where the uniform of the army men bearing the Ashoka statue and Taj symbols are torn apart.

In an attempt to ‘spice up’ their content, producers such as Ekta Kapoor and Karan Johar have shown scant regard to people’s sentiments and factual details. For them, all that seems to matter is setting the cash registers ringing even if it comes at the cost of insulting our national icons.

Unregulated OTT content has allowed them to escape with almost everything under the sun in the name of creative license. What’s worse? It targets a segment that is most impressionable and vulnerable. The target audience is generally teens and young adults whose views are moulded by what they see on screen.

It doesn’t augur well for the nation when its future generations are fed with content that only creates contempt and disrespect for national icons in their minds. The line has to be drawn somewhere and the buck has to stop with someone – be it the I&B Ministry or the CBFC. Now is the time to regulate OTT content.