Documentary: ‘The Evidence – Meat Kills’ is a Must Watch 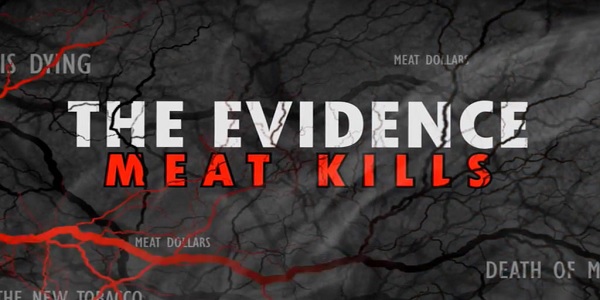 The science-based film, ‘The Evidence – Meat Kills’, is promoted as an “anti-tobacco” style campaign against meat. The Vegan Authority feels this significantly minimizes the scope of the film which not only covers the negative affects of meat on the human animal, but the horrible and unnecessary circumstances of nonhuman animals. It also addresses the environmental impact, un-sustainability as a business, and the multifaceted impact of meat consumption and animal genocide on society overall, including deeper notions such as:

Before going on, it needs to be said upfront: this is an extremely well produced professional documentary and in true activist style Mayank Jain, the Director of the film, has boldly released The Evidence – Meat Kills in its entirety to the public. Anyone can watch it free (applause, cheers!) , without ads, by going to the website.

The anti-tobacco motif is understandable, people can relate to this. It treads the path of an activist-style anti-tobacco campaign by tactically replacing ‘tobacco’ with ‘meat’. Once it was scientifically established that tobacco caused a multitude of chronic life-threatening diseases like cancer and heart disorders, smoking was turned into a synonym of death in 1964. Drawing heavily from medical evidence now available against animal-based food, the tobacco saga is being replayed with a cloned tagline, ‘Meat Kills’! At one point in the film, Jain says: “Meat is the New Tobacco”.

Not only is meat unhealthy for human consumption, the simile with passive smoking was most strikingly exhibited in the film. “Inhaling meat fumes coming out while barbequing meat or while frying meat could prove to be extremely harmful to the health of cooks. Surprisingly, meat fumes contain the same dangerous compounds which are found in tobacco smoke“, says the film quoting from one of the scientific studies.

Throughout the film there are cameos and interviews with various scientists often accompanied with diagrams, graphs, and other intriguing scientific information. Intermixed is extensive on-location film footage which includes many scenes of animal slaughter, mistreatment, animal confinement and the cooking and preparing of their flesh for consumption. We witness the suffering of human animals too with hospital footage depicting the conditions and treatment of persons whose bodies have been damaged by meat in one way or another. All these scenes are interwoven and seamlessly narrated by Surjan Singh into an engaging, educational, intelligent experience that is completely compelling.

Needless to say, there are some difficult visuals, yet it is easy to see they are necessary to paint a complete irrefutable picture.

Mayank Jain, 52, has been making documentaries on various subjects for the last 17 years. Working extensively on issues of health, governance and national security, Jain has produced and directed documentaries & television programmes on a wide range of topics such as tobacco abuse, alcohol abuse, obesity and food adulteration under various banners like Good Health TV and India Tomorrow.

The film is made in the context of an avalanche of western-lifestyle-related chronic diseases in Bharat like cancer, type-2 diabetes, kidney disorders and heart diseases. The burden on health-related services is huge both in terms of crumbling hospital-infrastructure and paucity of funds needed to address the enormous magnitude of health issues in Bharat.

Even when the Global Burden of Disease Study finds diets to be the number one cause of death and disability in the world, we find very little emphasis on healthy eating. The consumption of chicken meat has risen up to rupees one lakh crore [USD >$15 billion] per annum in Bharat with an annual growth rate of 12 to 13 per cent per year. On the other hand, meat consumption in United States has dipped by 10 per cent in the past five years, according to the Meat Atlas. The myth that chicken is healthier than red meat has been busted in the film.

Implementation of this idea by massive dissemination of information on good health foods could save lakhs of crores (millions) spent on health-related issues every year by central and state governments.

The film makers note other trends happening in the rest of the world on this subject, including:

The film also goes on to examine the health of butchers who are exposed to an overdose of violence in slaughterhouses. Experts have found that that they could suffer from severe stress and were vulnerable to getting psychotic disorders. Meat from animals is harmful because it contains stress hormones which get secreted in the frightened animal just before its slaughter, shows the film.

The Evidence – Meat Kills is a tour de force, the ultimate compelling argument to end killing animals and stop consuming meat. It is, as the title suggests, “The Evidence” and as such it includes all of the latest scientific findings on the effects of meat: on the human body, the environment, and society; and it is the perfect tool to convince the unenlightened.

This article first appeared here and has been reproduced with the director’s consent.

Mayank Jain
Mayank Jain is a TV journalist and filmmaker. Some of the famous films directed by him are: 'The Evidence--Meat Kills', 'The Bangla Crescent--ISI, Madrasas & Infiltration', 'Death Warrant' etc.