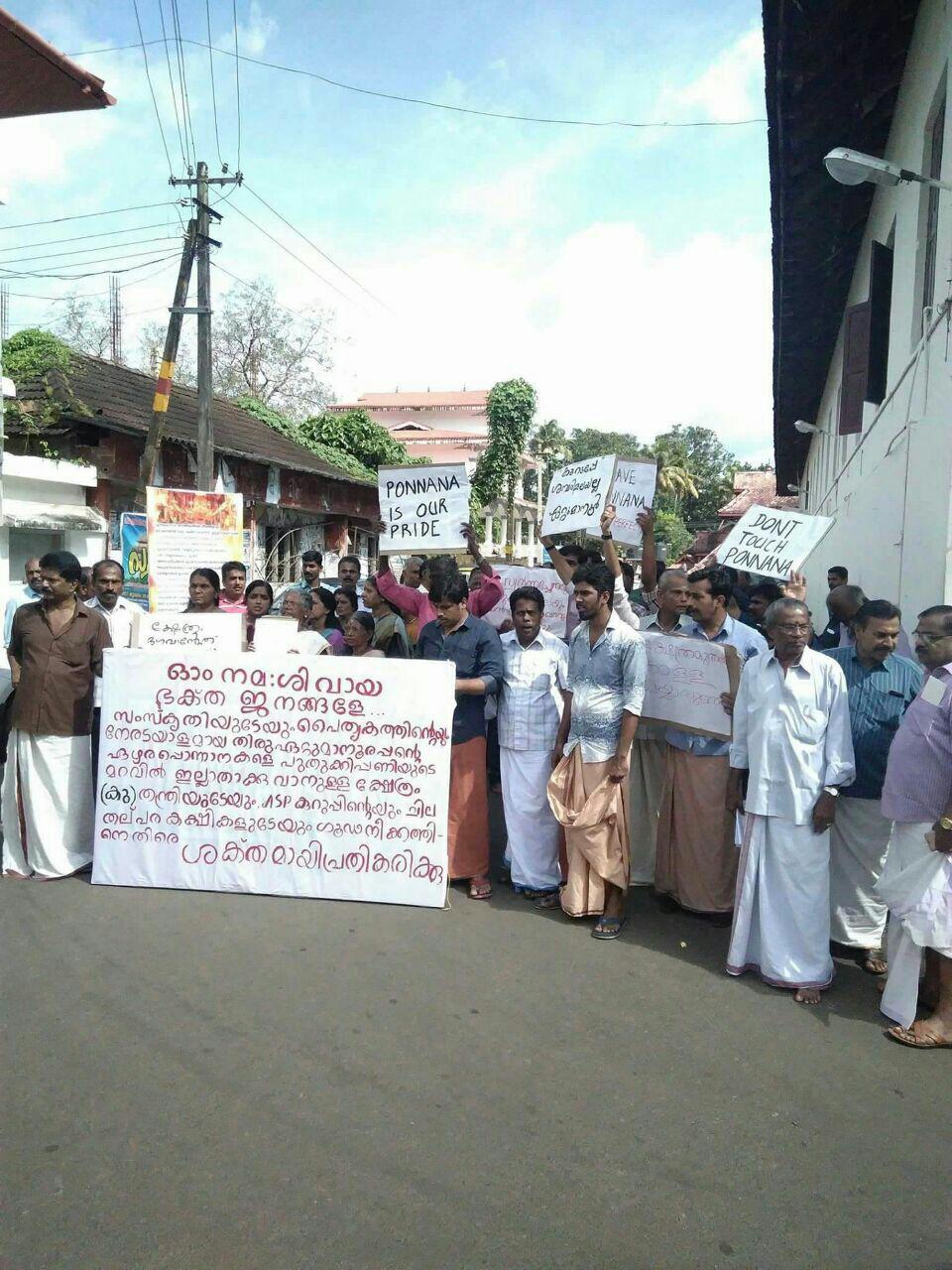 Ancient temples of Kerala under the secular government’s administration been recently going through an antique treasure replacement spree. After the melting of golden nettipattam(caparison) of Tripunithura Sri Poornatrayeesha Temple citing it’s small size for the present elephants while it has adorned some of the even taller elephants of last century which was challenged by members of Cochin Royal Family, Kerala Hindus have started protesting against such activities with suspicions of corruption. Despite of preserving the antique treasures of temples which form a part of our heritage by making new ones from the scratch, Kerala government has used the gold of ancient ornaments to replace them with new ones by melting it leading to doubts about their activities in the minds of devotees of the temples.

"Devaswom board trying to transfer the valuables worth crores of Rs without even preparing inventory/stock register" pic.twitter.com/TvT4wSOWVd

In a recent development regarding the maintenance of our antiques in temples, permission was sought to reconstruct the famous ‘Ezharaponnana’, seven-and-a-half golden elephants, of Ettumanoor Mahadeva Temple in Kerala. When the ombudsman and group who came to inspect the ‘Ezharapponnana’ or the seven and a half golden elephant sculptures at Ettumanoor Shiva temple in Kerala, devotees along with Kshtra samrakshana samiti stopped them from going ahead with their procedures. The devotees demanded that representative of devotees should also be included in the inspection team. Even though there was huge police presence, ombudsman and the group had to retreat due to protests from the devotees.

The seeking of High court’s approval to repair ‘Ezharaponnana’ of Ettumanoor temple had led to protests by the devotees. Devotees have their suspicions behind this move and they demanded that their doubts have to be cleared before proceeding with the reconstruction. It had been announced earlier that expert committee under the instruction of high court would visit the temple to inspect the Ezharaponnana to check if it has any damage.

The committee consists of Devaswom ombudsman P.R. Raman, Devaswom commisioner Rama Raja Prema Prasad, advocate commsioner A.S.P. Kurup, Tiruvabharanam commisioner K.A Sreelatha, Devaswom vigilance S.P. and sculptor Parumala Ananthan Achari. The Valiyathidambu, golden lotus, Shribali vigraham etc used in ezhunnallippu (temple procesions) will also be inspected to check if there are any damages in them due to wear and tear over the centuries.

The report given on August 9, 2017 says that there are chances that the golden coating of Ezharaponnana might tear off, and due to this before the next temple festival there should be an order to rebuild the Ezharaponnana. The copy of letter by Tantri Kantaru Rajeevaru stating that few parts of Ezharaponnana has been damaged due to its age is also submitted along with the report. But the Devaswom officers and the devotees state that Ezharaponnana which is only taken out once in an year doesn’t have any such damages.

The Devaswom officers state that the Tiruvabharanam commisoner, who has resposibility of taking care of valuable items in various temples should make reports regarding things like these. Devaswom officers only knew about the supposed damage in Ezharaponnana after the letter by board secretary seeking details based on the report given in the court. If there are any damages to the valuable items in temples, it is the Tiruvabharanam commisoner who should make moves after informing the board leadership. A gazetted officer is always present in this post.

But in this case, he has not made any report regarding the possibility of damage of Ezharaponnana. Advocate Commissioner who supervises the master plan schemes deployed in major temples is the one who gave report the court. Devaswom officers allege that this move by Advocate Commissioner is intervention in the management.

Statements like, “The ‘Ezharaponnana’ which is safely stored in the special strong room has no damages”, have given rise to suspicions of corruption in this reconstruction in the minds of the devotees. Further, the fact Advocate A.S.P.  Kurup who argued in favor of melting and selling the golden nettipattam (caparison) of Tripunithura Sri Poornatrayeesha Temple is also arguing to reconstruct Ezharaponnana is making this suspicion strong among the devotees.