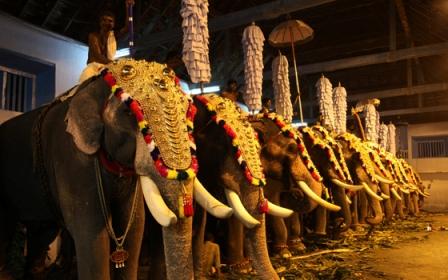 Tripunithura Sree Poornathrayeesa Temple is unique in the history of Bharat because it had 15 golden headgears, whose antiquity is more than 400 years.  The erstwhile Maharaja of Kochi had donated 14 of them to the British to build the railway line to Kochi, in Kerala, a century ago. This well accepted history is known to all of us. Lord Sree Poornathrayeesa is the owner of all the properties of the temple including this antique heritage property. Cochin Devaswom Board is the custodian of this property which is supposed to preserve and protect these monuments. Sree Poornathrayeesa Seva Sangham is an advisory body of the temple with a very limited role to help the Devaswom Board to conduct the annual festivals.

We all were happy in learning that the Devaswom Board had decided to construct a new Golden Head Gear (Thalekkettu) out of the broken gold available in the temple and from the central stock of the Board. The devotees were happy and willing to contribute for the same. This was given on record to the Devaswom Officer by some of the senior members of Kochi Royal Family and some devotees. The Seva Sangham had collected/is collecting funds from the devotees for the same.

The single prayer of the devotees and members of Kochi Royal Family before the authorities and the court was to decide the question of the antiquity of the “thalekkettu” first, and if it is found to be an antique heritage property preserve the same. The munsiff court which is supposed to be lowest in the ladder of judiciary, well appreciated the issue in real sense, unlike the highest court of the state and granted an injunction order.

In order to overcome the injunction order granted by the learned munsiff court, the Seva Sangham rushed to the high court and with an unprecedented move the suit was called into high court and munsiff court’s injunction order was vacated within 48 hours! This was reversed by the Hon’ble Supreme Court of Bharat which directed the high court of Kerala to decide the questions in the suit and writ petition; till then the status quo granted by the apex court will continue.

Now,  the questions remaining are why Devaswom Board officials and Seva Sangham Office bearers wanted to destroy the existing “thalekkettu” under the guise of construction of new one? Why these authorities are reluctant to test the antique and heritage value of the “thalekkettu”? What is the authority of Seva Sangham to make applications in the court for and on behalf of Devaswom Board when the Devaswom Board itself is arrayed as a party and remained a mute spectator throughout the proceedings?

The statutory authorities have a bounden duty to act in just, fair and transparent manner. Why are they keeping all information under the carpet, not even answering simple queries under the RTI act?

Is it not suspicious when the contractor requests for whooping 41% additional raw material (gold) for the construction of new “thalekkettu” and the officials agree for the same in NO time? Also deciding at the same moment to melt the antique and uniquely designed golden head gear to supply the additional quantity of raw material! All this happened on Feb 25, 2016, when you had 9 long months to go for the next use of the golden head gear! The golden head gear is needed only on Dec 1, 2016 (Thrikketta).

These questions are arising at a time when the question of the return of the Kohinoor diamond from Britain is engaging the attention of the Supreme Court.

No one questions the authority of Devaswom Board to decide to make a new “thalekkettu”. But that is not a reason not to test the antiqueness of the existing property. If we quote the media, this once again highlighted the glaring inadequacies in protecting our monuments that has prevailed over decades, and the Devaswom Board and Seva Sangham have given chances to the media to report this equating it with stories of smuggling of “parrot lady“.

The CDB (Cochin Devaswom Board) officials, some of the Seva Sangham Office Bearers and sycophants of Seva Sangham office bearers accuse the people who ran from pillar to post to protect the old traditional antique and uniquely designed Golden Head Gear! Don’t they (the destruction committee and no more advisory committee) have the common sense to protect such a heritage property! Interesting to hear from a sycophant of Seva Sangham office bearer (regarding the destruction of head gear) that “When you starve at your home, dont you sell the gold stuff?”

Does that mean our Sree Poornathrayeesan is starving! IF SO, WHO IS RESPONSIBLE? And when you starve, will you buy new gold or get proper food? Such idiots are now committee members of the Seva Sangham. What else could be expected when the traditional festival is considered by the advisory committee to just uphold their relationship with the elephant contractors/owners and NOTHING ELSE for Sree Poornathrayeesan! They won’t pay even for the flower garlands which are meant for the Lord!

So for this Thrikketta Purappadu, if our Lord Sree Poornathrayeesan is forced NOT to have Golden Head Gear, its JUST BECAUSE OF YOU, THE IMMATURE AND IRRESPONSIBLE BUNCH OF IDIOTS AT COCHIN DEVASWOM BOARD AND SREE POORNATHRAYEESA SEVA SANGHAM!! You are answerable to the devotees. An advisory committee is selected to protect the belongings of Lord and NOT TO DESTROY them!

Devotees of Lord Sree Poornathrayeesa, permit me to quote Swami Vivekananda; “Arise and Awake!” Let us not give the current authorities another chance to destroy some other antique and unique monuments.

May Lord Sree Poornathrayeesan shower his choicest blessings on you!