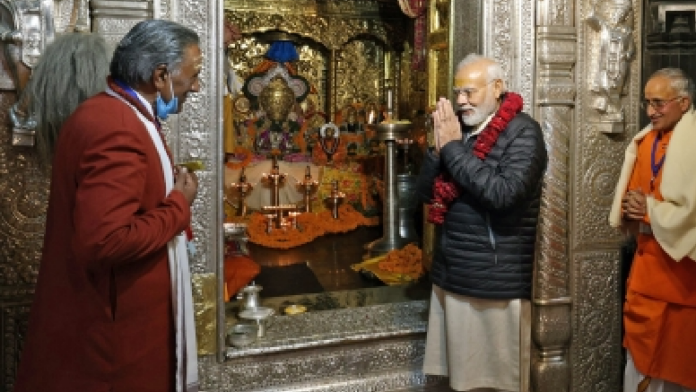 The opposition in the BJP regime, unnerved by the rapid rise of Prime Minister Narendra Modi as a leader of global eminence, has tried to run down his government by alleging that it is giving a fillip to Hindu Dharma and taking the country towards ‘majoritarianism’.

It has tried to build a narrative that the present government is not practising secularism, is putting Muslim minority in jeopardy and only harping on the primacy of nationalism for gaining political advantage.

The word secularism was not used by the makers of the Constitution obviously because the concept was built into the Bharatiya democracy through the adoption of ‘one man one vote’ without distinction of caste, creed and gender, express declaration of equality of opportunity and equal protection of law for all and a clear stipulation that in matters of state, religion will have no place.

The first ruling party of Bharat, however, used the slogan of secularism to claim the loyalty of the Muslim minority and now that it is in opposition, it has stepped up its criticism of the BJP as a ‘Hindu’ party. This is all done with a political calculation that in the face of a highly-divided majority community – splintered on account of caste and region – the support of the minority of nearly a fifth of the population is a match-winner.

The desperation of the opposition to garner this support has only increased with the return of Prime Minister Modi to power in 2019. In the process, some weird arguments deprecating Hindu Dharma have surfaced — like contending that Bharat is not a ‘nation’, that ‘Vaishnavites’ and ‘Shaivites’ are two mutually exclusive faiths as depicted in a recent movie on the Chola empire, or that the Hindu identity was an innovation of the British colonial rule.

The opposition is following a political strategy of stretching the ‘diversity’ of Bharat – a country where Hindus happen to represent the majority – to a point where it is even denying that Bharat is a ‘nation’.

Has it abandoned the pride in the sense of nationalism – not Hindu nationalism – that Bharat as a free country would impart to all its citizens? BJP justifiably gets the credit for promoting nationalism as no other party seemed to be competing with it on that count.

For political reasons, many in the opposition even agreed with the stand of the communal-minded elite and Ulema guiding the minority that saluting the national flag or singing the national anthem should be made optional.

As regards the divide between Vaishnavites and Shaivites, it is true that there was a big contest among them for superiority, particularly in the 18th century, but it was a rival claim of two sects of the same belief system that legitimised multiplicity of Gods.

In the classical episode of ‘Samudra Manthan’ – which is acknowledged as a marker of the perpetual battle between the good and the bad – it is Shiva who protects humanity by taking care of the eternal ‘poison’ while Vishnu in the image of Mohini gets the divine ‘nectar’ to the forces of the good.

Hindu Dharma never enforced any rigidity of observance and never called for ‘conversion’ of people who followed different approaches to religion. The agnostic anti-North Dravid sentiment of Ramaswamy Naicker’s time is not all that relevant to today’s politics of the South and any Shaivite credentials of Chola dynasty cannot yield any political dividend to any party in the present.

The cultural unity of Hindu Dharma cannot be weakened by subverting the cause of nationalism out of political motives. In a democratic set up, it should not be necessary to run down the majority community for winning over the minority votes.

Finally, the tenuous argument that Hindu identity in Bharat was a gift of the British colonial rulers, has no historical validity – it exemplifies political naivety that could only be attributed to an imported narrative of pseudo-intellectuals and the willingness of some political circles of the opposition to humour the Muslim minority in any way possible.

There is a grain of truth in this only to the extent that the British did base their strategy of governance on the fact of Hindu- Muslim divide in the Indian subcontinent. It is a part of history that in the first half of the 19th century, a Jehad was launched in Bharat against the British – the latter called it the ‘Wahhabi revolt’ – led by Ulema who resented the encroachment of the British on ‘Muslim land’ and who held that the political decline of Islam was caused by the deviation of Muslim rulers from the fundamentals of religion.

The British took a long time in suppressing the Wahhabi movement, some elements of which later merged with the Mutiny of 1857 that historians adjudge as the ‘First War of Independence’. This war was fought in the name of the Muslim Emperor and the British taking cognisance of this took to the strategy of relegating Muslims down in the matrix of loyalty and looking up to the Hindus for support. When Octavian Hume founded Indian National Congress in 1885 to spread the values of democracy and liberalism among Bharatiyas, he was targeting the Hindus primarily.

By the turn of the century, however, Congress became a platform for fostering a national movement for freedom, driving the British colonial power to change the strategy once again and revert to placating Muslims as the other community. It is known that the Nawab of Dacca launched the Muslim League in 1906 with the blessings of the British – the rest is history as far as the religion-based Partition becoming coterminous with the Independence of Bharat was concerned.

The British making a distinction between Hindus and Muslims did not detract from the deep background of Hindu Dharma in undivided Bharat. The anti-Modi political forces deriding the civilisational past of Hindus are in a way cutting the nose to spite the face.

The minority politics now being played with vengeance is a clear threat to Bharat’s internal security as many civil society groups in the country are in league with anti-Bharat lobbies abroad funded by the adversaries, to campaign against the Modi government for its alleged authoritarianism, anti-Muslim bias and connivance with violations of human rights.

An average Muslim in Bharat is – like other citizens – engaged in handling livelihood issues and fending for the family, but the leaders of the minority community have traditionally run its separatist politics and perpetuated the communal divide by promoting religious exclusivism and rejecting other belief systems.

They continue to block the community’s assimilation into the tolerant composite culture of the nation which certainly existed from before the advent of Islam. Religious freedom is basically about freedom of worship, but these leaders, including the Ulema, insist on Islam encompassing every aspect of life, including social, political and even economic.

They are using this to reject even the non-discriminatory arrangements made by a democratic regime in the spheres of management of educational institutions, work place discipline and requisites of law and order.

A citizen of a democratic state lives in three dimensions – personal, social and political. Religion defines the relationship of a person with his or her God and falls in the personal domain. The social dimension determines the quality of interaction of an individual with other citizens – culture as a product of religion is supposed to make for a smooth relationship between different groups in the country.

The political sphere is concerned with equal rights given to citizens to elect the rulers who would handle the affairs of the nation on behalf of the people. Voters may belong to different religions, but the political umbrella of governance at the national apex is the same for all of them.

Projection of religion into politics is what communalism is and it can never do any good to the party practising that – it can particularly harm the interests of a religious minority.

So long as Muslims of Bharat have the same voting right as is available to other communities, they have a fundamental equality with all citizens, and so long as they have the same opportunities and protection of law in our system of governance, they have no reason to fear injustice as a ‘community’.

The leadership of the Muslim minority must unequivocally reject terrorist violence attributed to faith-based motivation and individually as well as collectively declare that invoking Jehad for solving any political issues has no place in today’s world.

What is extremely disquieting now is the Pak ISI’s ongoing attempts to spread radicalisation in Bharat using social media surreptitiously for the purpose of creating sleeper cells of terrorists and ‘lone wolves’ in Kashmir and elsewhere. It has been pushing communal militancy in the direction of faith-based terrorism as is revealed by the NIA’s nationwide drive against the Popular Front of India (PFI) that finally resulted in the imposition of a ban on the organisation.

Significantly, this was a repeat of the action once taken against the pro-Pak SIMI by way of a ban in 2006 after it was found to have created Indian Mujahideen, a body responsible for acts of terrorism.

All political forces in Bharat would do well to abstain from supporting politics of violence, call out Pakistan for meddling with our domestic scene and keep nationalism above differences in public life.

A nation needs security and development – in that order – and being vocal only about economic issues and maintaining deliberate silence on threats to internal security like cross-border terrorism does not add to the credibility of the opposition.