In an unprecedented event in Meerut, Dalits who threatened to accept Islam after allegedly getting stopped from entering temple performed Yajna in the same temple with their own hands and vowed to follow and protect Hindu Dharma. The event was organised by Agniveer.

In a news report published by DNA last week, it was reported that a priest has denied entry of Dalits inside a temple and Dalits have threatened to convert to Islam over this. “Women were told that they are Dalits not Hindus and will not be allowed to offer prayers at a Hindu temple. They may go to their own Valmiki temples,” alleged Deepak Valmiki.

Agniveer’s team led by Shri Amit Tiwari and Shri Satish Vaid visited the village on Saturday with promise to bring people back to Dharma’s path and also to root out caste biases if any. After inquiring, it was found that a deep anti-Dharma & pro-Jihadi network is active in brainwashing Dalit community. While the dispute was not over entry inside temple but some ritual, it was projected and portrayed by media with help of few locals as if it was the case of Hindus denying Dalit entry in temple.

Agniveer Team reached village and sat with both parties. Shri Amit and Satish discussed issue with them at length. It was discussed how enemies of Dharma are planning to divide Hindu Brothers and establish their rule to conquer Bharat and why we all must unite to protect our Dharma.

And then something unprecedented happened. Agniveer entered the same temple which was said to have denied Dalit entry with same Dalits. Rajputs of village also followed. And all performed Yajna. The same Valmiki boy who is earlier said to have threatened with conversion to Islam along with 625 Dalits (500 Jatavs and 125 Valmikis) of the village chanted ‘Har Har Mahadev’ and ‘Hindu Ekta Zindabad’ after doing Yajna with his own hands.

Rajputs told that there has been no caste discrimination ever in the village in any temple and they vowed it again in the Yajna. Dalits also showed solidarity with Dharma and thanked Agniveer for this much needed event. Yajna ended with Jaikaras – Jai Shri Ram, Jai Hanuman and Hindu Ekta Zindabad by all Dalits and Rajputs together. And the final declaration concluded – We will not leave our Dharma! 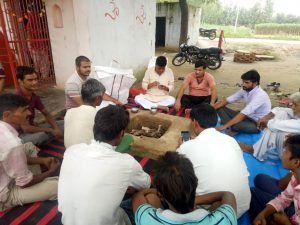 Agniveer thanks all villagers who participated in Yajna to give message of unity. We are proud of gigantic efforts of team specially Shri Satish and Shri Amit who reached village before the conversion mafia and saved hundreds of Dharma’s children from getting converted.

We want to thank all individuals who helped us in the process. Special thanks to our inspiration Shri Sanjeev Newar, founder – Agniveer without whose guidance this couldn’t have been possible.

Those who wish to support Agniveer in this mission, please visit http://agniveer.com/give