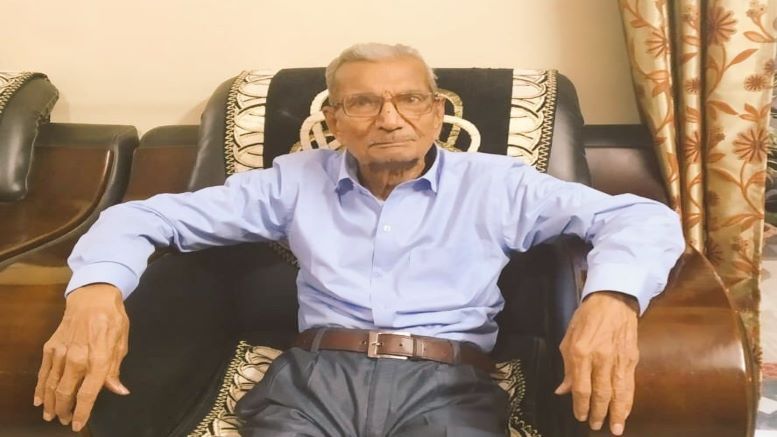 RSS (Rashtriya Swayamsevak Sangh) has always been known for its sacrifice and sense of duty towards the nation. Amid all the gloom of the second wave of the Chinese Virus pandemic where states are faced with a crumbling healthcare system, came the heartwarming story of octogenarian RSS worker Shri Narayan Dabhakar Kaka’s sacrifice.

85-year-old Dabhadkar kaka (uncle in Marathi) had been diagnosed with the Chinese Virus. Owing to the shortage of beds, his daughter was able to arrange one for kaka after much running about. As kaka was waiting to be admitted while his grandson-in-law was completing the paper formalities, a woman who was looking out for a bed for her husband was seen frantically pleading with the hospital to get her around 40-year-old husband admitted.

Seeing her plea for help, Shri Dabhadkar made the decision to sacrifice the bed for the woman’s husband. He told the doctors to get the woman’s young husband admitted and added “I’m already 85 years and have lived my life. This woman’s husband needs the bed more than I do. His children need their father.”

He also asked his grandson-in-law to inform his daughter of the decision who was hesitant at first. However, Dabhadkar kaka had made up his mind and his daughter finally acceded. Accordingly, the consent form was signed forgoing the bed which was then given to the young man. Shri Dabhadkar returned home where he passed away after three days.

It hardly comes as a surprise that Dabhadkar kaka decided to forego the bed in favor of someone younger because RSS culture teaches one to put others before the self. RSS always asks its workers to ensure that resources are given to the neediest first.

This story was widely shared on social media by several users including top BJP leaders such as MP CM Shivraj Singh Chouhan, Kailash Vijayvargiya, and others. Social media users were all praises for Shri Dabhadkar and the news sent some positive vibes out at a gloomy time like this where Maharashtra, in particular, has been faced with a crumbling health sector coupled with a clueless Maha Vikas Aghadi (MVA) government.

The Congress, one of the key allies in the MVA government, and its media friends were out to discredit the sacrifice of Shri Dabhadkar only because the octogenarian was an RSS worker and thereby displayed their rabid hatred for RSS. The Congress plumbed the depths of indecency as their members attempted to present false call recordings so as to discredit the sacrifice of late Shri Dabhadkar.

Lutyens media has always been Hindudveshi and in keeping with their Hindudvesh, they took a cue from Congress workers spreading falsehood on social media. Indian Express group’s Marathi newspaper Loksatta ran a ‘fact check’ based on a fake tweet that was since deleted. Some of them even circulated ABP Majha’s screenshot which the media outlet itself refuted as being fake.

With attempts being made to malign the image of a deceased person, his daughter Asavari came forward to clear the air. She put out a video and explained the entire sequence of events. It took them 4-5 hours to get a bed and X-ray reports indicated that infection was very high.

However, there were people who were literally crying and begging for a bed. His daughter added that it was then that Shri Dabhadkar decided that he would vacate the bed as he was taken in by the cries for help and believed that he had lived his life. Since her son-in-law was in a fix, he called Asavari to whom Shri Dabhadkar explained his decision.

The pain in her voice is apparent as she says how difficult it was to accept her father’s decision. She also said that kaka did not clearly explain the reason for his vacating the bed to even the doctor who told him that he won’t be able to get a bed again, kaka simply told him that he wished to be discharged. His daughter says that he only apprised their family of his decision as he was unable to see the pain of young people.

That the daughter mourning her father’s death has to put out a video shows the extent of immorality prevalent in the society among those who would question the sacrifice of someone only because he belonged to an organization whose views they don’t agree with.

Dignity in death is the right of everyone but Congress and their media cronies have crossed that line of decency. The same media, however, loses no time in turning so-called minorities into heroes without as much as a basic fact-check.

Journalists like Abhisar Sharma, Ravish Kumar, Mohammad Zubair, and many other so-called ‘secular liberals’ tried to push another viral ‘Muslim hero’ story, claiming that a Mohammad Younis in Muzaffarnagar performed the funeral rites of Anubhav Sharma, along with pushing their cringe ideological talking points attacking the “hypocrisy” of religion. However, Swarajya journalist Swati Goel Sharma got in touch with the family of Anubhav Sharma, who claim they are “deeply pained” by the “fake viral posts”. and that no “journalist” heard the deceased’s family side of the story first before pushing their ideological agenda of boosting a ‘Muslim hero’ narrative.

While talking to Swati Goel Sharma’s deceased Anubhav’s brother has narrated that Anubhav did not even have Covid. The ‘Muslim Hero’ hailed in media and countless social media posts is a mutual friend of the brothers who works for the family and drives their vehicle.

Sharad Sharma, the brother of Anubhav Sharma revealed that the family is extremely pained by the baseless allegations that the family refused to perform the last rites of Anubhav. He stated that had their family members, relatives and neighbors had performed Anubhav’s last rites as per Hindu customs. A priest was taken who had presided over the rites at the cremation ground. Since Md Younis is a friend and known to the family, he had come along with too and was present during the last rites. As everyone was asked to offer a fistful of ‘raal’ to the pyre as per custom, Md Younis did too, as a mark of solidarity for a friend.

Sharad further explained to Swati that somebody had clicked a photo of Md Younis offering ‘raal’ to the pyre and later Amar Ujala published a report. Soon the photo went viral, with several social media users claiming that it is a Muslim man performing the last rites for a deceased Hindu after the Hindu family refused.

Sharad added that the whole episode is nothing but a social media farce and he had himself performed the last rites of his brother, along with family members and friends.

But this is not even the most egregious example of mainstream media bias when it comes to covering such stories. Recently, 85-year old RSS Swayamsevak Narayan Dhabadkar gave the ultimate sacrifice by vacating his hospital bed so that a younger patient in his 40s with COVID-19 can occupy it. This sacrifice led to Shri Dhabadkar losing his life. However, in a ghoulish manner, Loksatta, a Marathi-publication under the Indian Express umbrella, published a “fact-check” disputing the validity of Shri Dhabadkar’s sacrifice. Loksatta has now edited their ‘fact-check’, claiming that their report was based on an unverified tweet.

The mainstream media is not only disproportionately signal-boosting ‘Muslim hero’ stories but also denigrating genuine heroes who happen to be from the RSS to serve a political agenda.

There can’t be a starker example of the media bias. Good deeds need to be appreciated but here Congress, their allies, and their media cronies have resorted to demeaning the sacrifice of a deceased octogenarian. Society needs to tap into its collective conscience and call out such uncalled-for false accusations to demean an octogenarian Hindu man’s sacrifice.