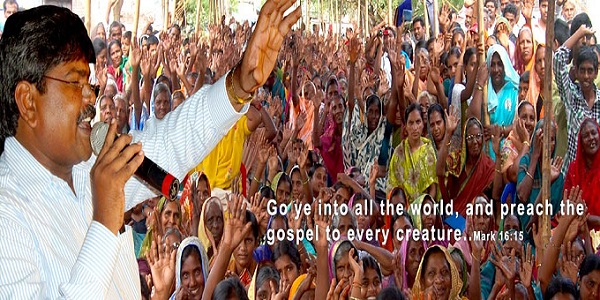 Villagers of Kankanaalapalli village in coastal Guntur district of Andhra Pradesh have objected to the derogatory language used for Hindu Gods/Goddesses in Christian missionary preaching carried out by a Church in the village.

A report on this issues appeared in local media – 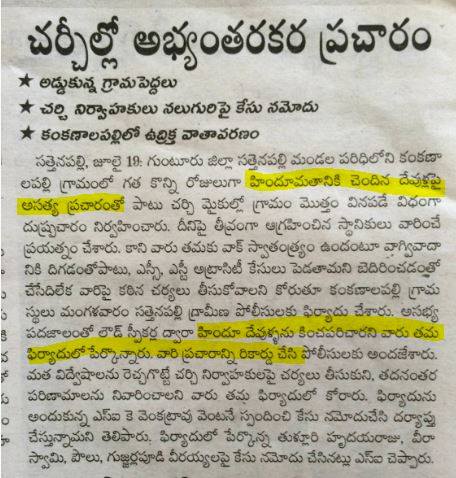 “Sattenapalli, July 19th: In Kankanaalapalli village, Sattenapalli mandal of Guntur district, for the past few days a Church has been preaching against Hindu Dharma using loudspeakers in a way that makes it audible for the entire village. Perturbed by this act, the residents asked the Church to refrain from doing so. However, the church organizers  not only argued back that they have the right to free speech, but also threatened to file cases under SC/ST Atrocities Act.

With no other way out, the harassed residents of Kankanaalapalli filed a complaint with the police. They mentioned in the complaint that the church organizers used loudspeakers to make speeches, as a part of which they used derogatory language against Hindu Gods. The residents recorded the speeches and handed the same over to the police. The residents asked the police to take stringent action against the church organizers (four persons) for making inflammatory statements and prevent any kind of communal tensions that may arise in the future. Police SI K. Venkat Rao said they will investigate the matter and registered a case.”

Such predatory proselytization, where Hindu beliefs and icons are openly abused, is common in the interior areas of most states of Bharat, especially those where foreign-funded evangelical missionary organizations have deep roots and political connections like Andhra Pradesh, Jharkhand, Chattisgarh etc.

Guntur district in Andhra Pradesh is a hotbed of evangelical activity. Although census 2011 says there are less than 2% Christians in Guntur, locals on the ground suspect the census accuracy and say that Christians are between 20-25%. Many Hindu SCs & STs who convert don’t reveal their new religion because they fear losing reservation privileges that their Hindu SC/ST classification gets them. Many people convert for the monetary incentives provided by missionary groups flush with foreign FCRA funds – they also hope that once their financial condition improves,they could return to their original faith.

The threat by the church in this case that they would file a case under SC/ST Atrocities Act against protesting villagers also shows the brazen misuse of our laws by these soul harvesters. In a recent judgement, The Hyderabad High Court had clarified that ‘An SC or ST ceases to be so after conversion to other religion.’ But such threats are enough to scare poor villagers, who often choose to ignore and suffer the vicious missionary propaganda in silence. Our left-liberal dominated national media, with several evangelical plants, never bothers to highlight this gross human rights violation of poor Hindus, unlike the ‘Ghar Wapsi’ campaign which is regularly vilified.