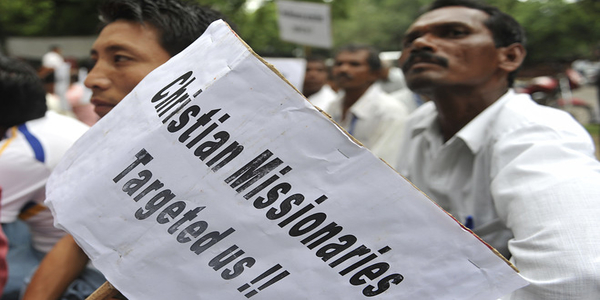 Christian missionaries have become increasingly visible and controversial in Bharat. As I grew up as a Christian, I would like to share my observations from a personal angle.

When it comes to religion, I noticed that Bharatiyas tread cautiously. Care is taken ‘not to offend the sensibilities’ of the followers of other religions. Well, I should specify: Hindus take care not to offend the sensibilities of Christians and Muslims. As those are in the minority, it is argued, they need special consideration so that they don’t feel threatened by the Hindu majority.

It is true that those religions are in the minority in Bharat, but worldwide, both religions are very powerful with great financial and political clout to achieve their objective which is to bring as many people as possible into their fold. This clout is reflected even in the Bharatiya media and politics. Just observe how mainstream media report on minorities. I can’t help feeling that there is a clever Public Relation strategy behind the scenes. In contrast, Hindu Dharma clearly has no PR strategy. ‘Truth will triumph’, is the motto here, never mind if it takes ages.

Sometimes I hear the following argument for a laid back attitude: ‘Just because missionaries despise Hindu Dharma, it does not become bad.’ This is true, but it would not harm anyone and might benefit many, if Hindus would refute the obnoxious accusations that Hindu Dharma is a primitive religion, as it certainly is not. One can present the profound tenets of Hindu Dharma, if not point out the shortcomings of the dogmatic founder religions.

Pointing out the shortcomings of other religions seems to be a taboo for Hindus. I wonder why. Debates on religious issues were common in ancient Bharat and were of the highest order. Women also took part in those debates, which are recorded in the Upanishads. Adi Shankara challenged the Buddhists in debates.

Yet today there is not much discussion on religion or philosophy. One reason may be that a part of the intellectual class in Bharat has been influenced by the British to such an extent that they adopted the view that Hindu Dharma is primitive without ever reading any of the ancient scriptures. It is a small, but influential group that is ever ready to defend the minority religions.

Often, Hindus declare that all religions are equal as they all believe in the same God as there is of course only one. Yet, are they equal? Christianity (and Islam, too) refutes this view. It declares that it is not only superior but “the one and only way” and therefore everyone needs to join it to be saved. The Church claims that Jesus Christ himself commanded to go out and convert. So they have the ‘duty’ to convert the whole world population to their ‘professed truth’. And the Church goes about it with great zeal and dubious means.

Of course every religion has good points. They all point to the Highest; they all stress the need for an ethical life. They all give hints how to connect with God. Yet one should be very wary if there are also ‘bad’ points, like if a religion divides humanity into those who are saved and those who are eternally damned.

So what distinguishes Christianity from Hindu Dharma so that it feels superior? The main point is the status of Jesus Christ. It is just not enough to see in him a great enlightened sage or an avatar. He is claimed to be the only son of God, whom God had sent to earth and who, through his death, saved mankind from the original sin.

This of course is difficult to understand and cannot be understood. It has to be believed. It is a dogma and dogma means, there is no proof. So why should one believe it? Because it has been decided in some council some 1700 years back that this is the truth and Christians have to believe it.

Unfortunately Christians do believe it. I, for example, ‘knew’ already in primary school in a small town in Germany, that we, i.e. the Roman Catholics, were ‘right’ and all others, including the Protestants in the neighbourhood, ‘wrong’. As a teenager, however, I started questioning and almost lost faith in God. I could not believe in the personal God anymore who loves his Church and sends all heathens to hell.

One uncle happened to be a priest and in his library I read about the history of the Church. It was an eye-opener – the decadence of the popes, the bloody conversion of South America, the literal killing of any dissent, the scheming for power and wealth… Together with religion I was about to throw out God as well, as He seemed inextricably linked with it.

Then I read an article on modern physics. It said that the whole creation basically is one energy. “This means there is a God!”  I realized. God cannot possibly be biased towards one group against another. He has to be the ground of everybody and everything.

When I came to Bharat, I was amazed how profound her ancient wisdom was – a wisdom that does not have any dogmas and does not divide people into us versus them. ‘Brahman’ or ‘Tat’ of the Vedas is not a personal God that has likes and dislikes, but the invisible, conscious basis of all forms and names in this creation. This basis is there also in our own person and can be experienced, it is claimed and this claim does not go against reason. “Enquire and experience” is recommended.

In contrast, Christianity demands blind belief and certainly does not encourage enquiry nor experience. A Church that branded her own mystics, who realized their oneness with God, as heretics cannot teach anything to Bharat. She only can divide.

Missionaries try by hook or crook to get converts and target especially the lower classes and even children. It seems as if they have a quota to achieve. They claim that Christianity is the right faith and Hindu Dharma very wrong. The phrase “divisive forces” is used freely in Bharat, but strangely I have not heard it in connection with missionaries where it were appropriate.

Christian theologians would do well to study Hindu wisdom with an open mind. It would give them a deeper understanding of Jesus’ sayings, as many of them are cryptic, yet from a Vedantic angle easy to interpret. They would realize that dogmas are a hindrance in the process to uncover truth. Such openness would make religion spiritual. Mystics would be appreciated. No “us versus them”, no borders, no God who belongs only to one group and who condemns the rest, just a genuine search for the One Essence beyond name and form…

To expect broad-mindedness from Church representatives seems a long way off. As of now their course is set on confrontation and Hindus so far have been too polite to question the ‘one and only way’ bogus. While in the west many leave the Church, in Bharat many join for reasons that have nothing to do with religion.

Those converts may initially get some financial benefits but the price is high. They have to confess a belief in dogmas, in which they don’t believe. They have to despise the faith that they had held dear. They or at least their offspring will become convinced that they alone have the ‘true’ faith and will look down on those who go to temples because their gods are ‘false’.

In the process they lose their integrity and will become hypocritical, like so many in the west. And if conversion is not restrained, together with her children, Bharat may lose her integrity. Truth will have no place anymore.

(This article first appeared at https://mariawirthblog.wordpress.com/2013/03/04/christian-missionaries-harm-india/ and is being reproduced with the consent of the author)