The Call of Divine Shakti It is said that when divine energies decide on calling you, you surely get driven to them. Something similar happened to me when a set of relatives called us up if we wanted to join them for a weekend trip to Jim Corbett National Park. It had become quite cold and I was skeptical, but we finally decided to go along as it was a short journey by train and the terrain was not too rough /high for the little bit of local travel by road . I was meeting this set of relatives after years and therefore was hoping that the trip would be comfortable as we had small children in the group too.

The train journey was fine, and we finally got down at Ramnagar railway station late evening in chilling cold. The cabs from the resort were already there to pick us up. As we started for a 20 minute road trip to our resort, the driver started talking. He was living in that area for almost two decades, so I generally asked him if there was something to see nearby except doing a jungle safari through one of the gates of Jim Corbett. He said, ‘there’s this temple at the hill nearby, you should visit it’. As my husband asked him, ‘which deity temple is it?’, I instinctively replied, ‘it’s a devi mata temple’. The driver nodded his head, ‘yes, its Girija Devi temple, locally called Garjiya temple’.

I had no idea till then that such a temple existed, had never heard of it but my heart said that it was a devi temple. A deep sense of joy and peace filled my heart as if I am being called to the temple. The feeling is not explainable. I had been listening to Ram Raksha Stotra and Durga Kshama Prarthana from last one month as and when I got time, simply because of astrological reasons. Instantly I decided that I’ll visit this temple for sure. The driver meanwhile continued talking, ‘This temple is no ordinary temple, it is very very old. Decades back, when there was a jungle there, lions and tigers used to clean that temple with their tails, people have even seen them doing parikrama (take a round) of that hill and temple’. I nodded and kept listening. Upon reaching the resort, I inquired and found that the temple was just 4 kms away from there, I booked a cab for the morning of Makar Sankranti to visit there.

Makar Sankranti day came, and off we went to the temple. The main road from Ramnagar to Dhikuli takes a slight turn towards the temple road and this is what you see : 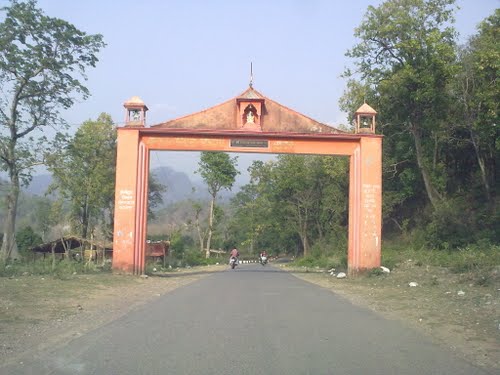 This area seems to be a village. There’s a parking space upon reaching which is so full during Kartik Poornima that cars are parked for at least a kilometer. After parking, the street leading to the temple is lined with small shops selling tea, snacks, food, toys, prasad , flowers, jungle safari & temple souvenirs. The entrance to the spacious temple: 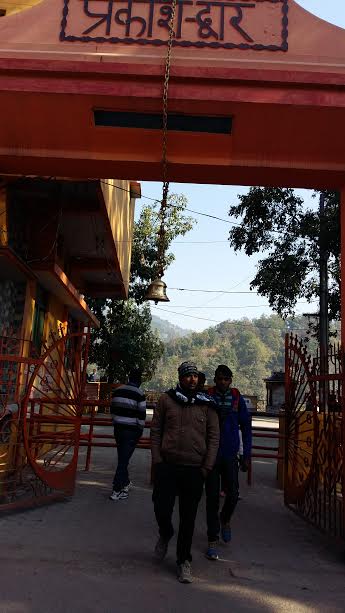 Inside the temple complex, there is a bhandara / langar area, office and toilets on the right side, on the left there are small temples of various deities and a common puja/ yagya area. As one keeps walking straight, a bridge awaits that is built on the beautiful Kosi (Kaushiki) river, one can see the main temple from this side of the bridge. Walking on the bridge is a refreshing experience of being able to see the waters of Kosi till far off  : The temple  is on the right side after crossing the bridge. More shops can be seen and one has to take the shoes off before standing in the queue for the darshan. Though the Devi & Bhairav reside here since very long, even earlier than 1940, this concrete bridge was completed only in 2010 : 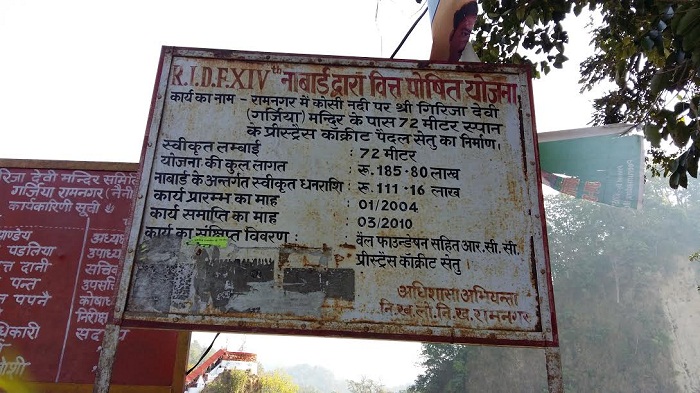 Earlier there was only a temporary wooden bridge to cross the river : However, earlier and even now, it is not possible to visit the temple during rainy season, especially because every few years, the river gets flooded. The worst floods were 2013 Uttarakhand floods, but moderate flooding happens almost every year. It is not possible for common public to enter the temple when the river is flowing with high water level : 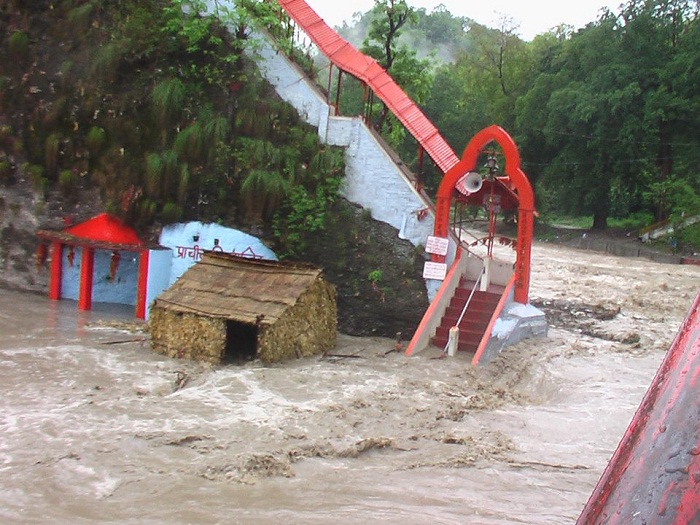 There is an ancient Bhairav cave at the base of this hill on which the Garjiya / Girija maa temple stands at the top. When one stands in the queue, one sees the entire hill from one side, which has strings of red cloth / mata ki chunni, which are either tied up by people making a wish or keep flying down from top of the temple by people who have offered it to the devi.. 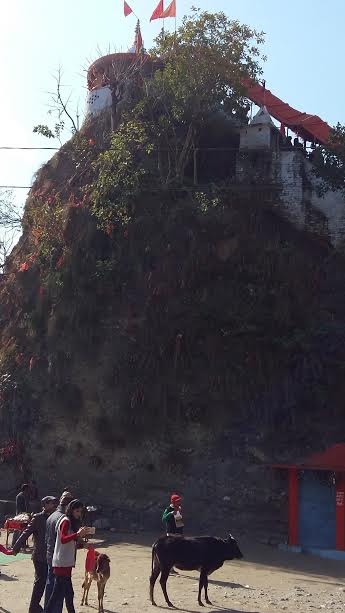 There are about 75 to 90 stairs up the hill, and during ordinary days, the queue is not more than half an hour long. As we were standing in the queue, the lady just behind me gave me a smile as i turned my head for a glance at surroundings. I asked her if she belonged to that area only. She said yes and told me that the bhandara that day was sponsored by her son and his friends. I told her that I was very happy to visit that temple and asked her to tell me more about the place.

She said, ‘It is said that the devi idol came on the hill during a flood very very long back. Baba Bhairav stopped her and since then, she resides on the top of the hill. Floods destroyed part of the hill but the temple is intact, just like Kedarnath. Ealier there was a small temporary bridge for crossing the river, once we came at the beginning of the rainy season. Pandit ji was also standing there. Suddenly, we saw a large mass of water approaching the bridge. People ran away from the bridge on both sides, and within minutes the water took away half of the bridge. All the people were rescued from the other side by evening. Pandit ji usually keeps a boat to come to the temple during the rainy season, at least a few times. So, we gave our offering to him and left. You get to see the devi only when she wants it.’

I nodded my head with a smile. In about 40 minutes, we reached the top of the hill, to an exhilarating sight. I think belief does that to you, it is all about energy. I bowed my head in reverence to the devi, filled my lungs with the oxygen flowing around the seat of Shakti : I controlled my emotions, did the parikrama of that small temple with my family, made my offerings, clicked some pictures and brought the prasad back.. 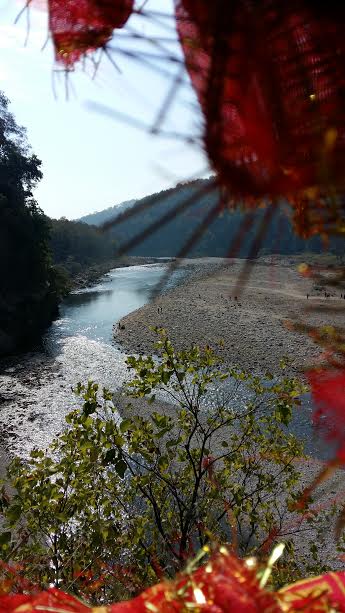 The temple bars were laced with red chunnis, signifying various wishes made by ordinary mortals like us. If one’s wish is fulfilled, one has to come back and open the knot.. 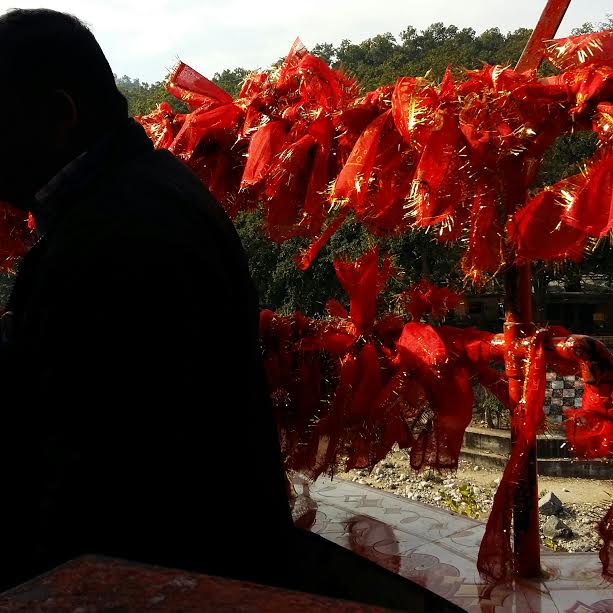 We came back to the temple complex, there also exists a 9th century Lakshminarayan idol, which was found during excavation of this area. It is believed that this idol was built during the rule of Katyuri dynasty : 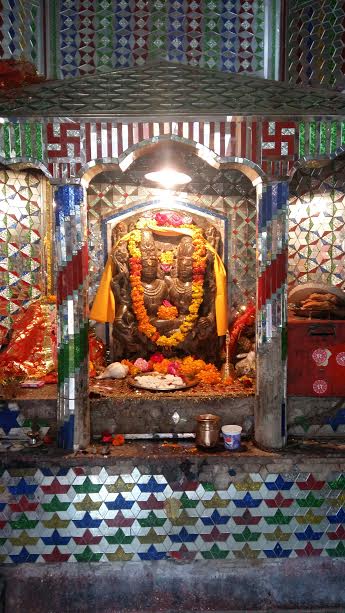 As i was thinking about the story told to me by that lady, I realized that people in that area were far more religious and easy-going. We were short on time to be able to visit all deities and I had to come back to the parking, mainly because the children were beginning to feel tired. I felt that the divine gives ques, but only few are able to grasp them in time. I took a deep breath and whispered ‘महादेवी, यथा योग्यम तथा कुरु !’ (Mahadevi, Yatha Yogyam Tatha Kuru).