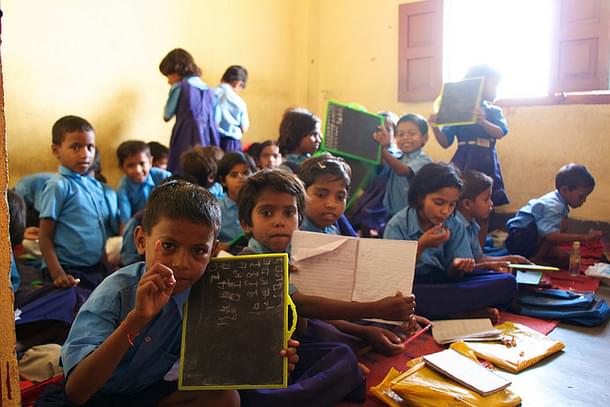 The book Revisiting The Educational Heritage Of India by Sahana Singh while detailing the transfer of knowledge from Bharat urges us to look back at what we have missed out on by walking away from our rich past. The book also brings to light the commitment of ancient thinkers and teachers in building the indigenous education system.

Extracts quoted bySwarajya Mag in its review highlight what post-independent Bharat has missed in terms of Indic educational heritage that influenced thinkers across the world. The book is as much about preserving the past as it is about embracing essential aspects of modern education. Conservation and propagation of knowledge are equally important as its creation.

About five to twenty million manuscripts are said to be surviving in Bharat today. Memory Training based on the 11 rules of memorization used to transmit Vedas has been suggested as one of the methods of preserving whatever manuscripts we have at present. The book recommends Chaturanga as a method to teach foresight and strategy.

Some interesting extracts from the book:

Scholars from China first visited Indonesia where they spent some years learning Sanskrit and other subjects in order to gain enough competency to seek admission in famous Indian universities. Indonesia was like a mini-India.

Only about 20 per cent of the students who applied (to Nalanda) got through… And yet, the university in its prime had as many as 8,500 students and 1,500 teachers. First elementary school came up in England only in 1850 and catered to a minuscule fraction of children.

Pythagoras may have travelled to India or at least was deeply influenced by her ways in Egypt. He became a champion of vegetarianism and forest schools. A couple of thousand years later, Voltaire was to assert “…everything has come down to us from the banks of Ganga… Pythagoras went from Samos to Ganga to learn geometry.

In a large number of schools, ‘Soodras’ were in majority while the Brahmins and ‘Vysees’ were in minority….In Tamil-speaking areas, the Shudras were 70 per cent in Salem and Tinnevelly, to over 84 per cent in South Arcot.

For a long time, Gurus disapproved of transferring the Vedas to written format even after writing was well established. Perhaps they worried about the incorrect transmission of intonations of the sacred.

It is evident that our ancestors had great concern for the preservation and propagation of knowledge. We need to reflect on whether we have proved ourselves worthy of the legacy of our ancestors. The book provides us a detailed idea of the rich educational heritage of our past thereby encouraging us to reflect on ways to conserve and propagate the rich cultural heritage of our past. We owe it to our Gurus who handed down these treasures to us with great care and a sense of responsibility.