Bollywood’s Islamist pawns have no placards, no outrage for grooming jihad victim Ankita 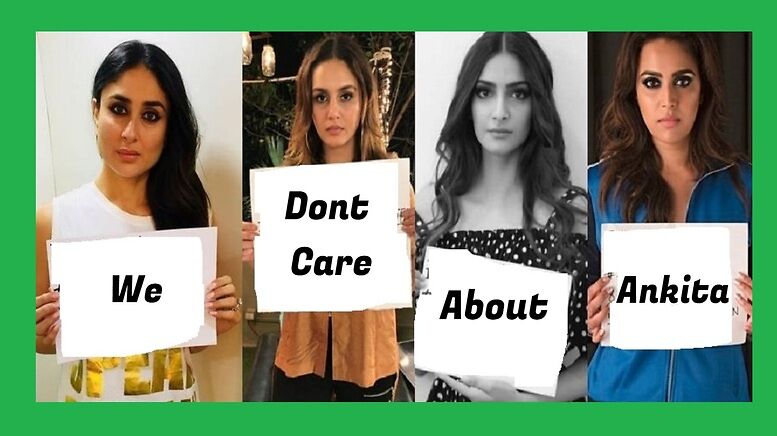 It has been over a week since 15-year-old Ankita Singh was charred to death after being doused in petrol and set ablaze by Shahrukh Hussain. Ankita was a Hindu minor from Jharkhand and was a victim of Love Jihad, also known as Grooming Jihad globally.

While Dumka DSP Noor Mustafa allegedly tried to water down the case against the Islamist by recording the victim’s age as 19 instead of 15, media, social personalities, influencers, and celebrities have also failed the victim.

The most startling aftermath is the deafening silence of the Bollywood biggies. The self-styled social activists, influencers, preachers, and feminists have been completely quiet about the gruesome killing of the Hindu teen. The notorious placard gang is also absent.

Kareena Kapoor Khan, a Bollywood A-lister who married into a family that rose to Nawabi by betraying the Marathas and aiding the British in pre-Independent Bharat, has named both sons after Islamist tyrants responsible for the massacre of countless Hindus and rapes of Hindu women.

She was one of the pioneers of the placard campaign during the alleged rape of the Kathua girl in 2018. She held a placard that dragged entire “Hindustan” into the alleged crime and maligned the honour of a Hindu Temple. Her placard didn’t accuse any “rapist,” but it was meant to shame and chastise the entire Hindu community and their deities.

As ironical as it gets for a woman who names her children after mass rapists to hold a placard as a sign of “outrage” against an alleged rape, it soon became evident that Khan had pulled that stunt to promote her upcoming movie, Veere Di Wedding. The offensive words slandering the entire Hindu community were soon seen on similar placards held by the other actresses in the movie.

Gradually, every small-time entertainer of Bollywood who wanted to project themselves as liberal secular posted pictures with this derogatory placard. The list also includes “has been” hosts like Shruti Seth and Mini Mathur, married to Muslim movie makers. Hence, their loyalty to the anti-Hindu propaganda is self-explanatory.

Again, it will be erroneous to say that only Kareena Kapoor Khan or other Bollywood small-timers married to Muslim men are Hinduphobic. Every Bollywood personality exploited the Kathua case to defame Hindus and Hindu temples, highlighting the extreme Hindu hate of the industry. As the Hindus were neither as united nor awakened as they are today helped this coterie further their ugly narrative.

Bollywood couldn’t care less about the rape or death of any girl unless they can use that unfortunate incident for their Hinduphobic agenda. They even refuse to acknowledge tragic incidents like that of Ankita because the criminal is an Islamist.

The industry has spent over a century whitewashing Islamist crimes and projecting the Hindus on the wrong side. When Islamist terrorists bombed Mumbai, Bollywood made films like Kurbaan, and My Name is Khan to project a fabricated victimhood of this commuity.

For decades, these Bollywood personalities have promoted Love Jihad through their films and their personal choices. Hence, this indifference of this vicious cabal to the spine-chilling episode which should ideally have been the most discussed subject in the country.

Not one placard has gone up for Ankita. The pseudo-feminists of Bollywood have not come on the streets demanding the death penalty for Shahrukh. These social activists have not organized any national or international protest rallies. With Ankita’s death, Bollywood has exposed its true Islamist self. And with this, they have justified the call of Hindus to Boycott Bollywood and their propaganda-infested movies.