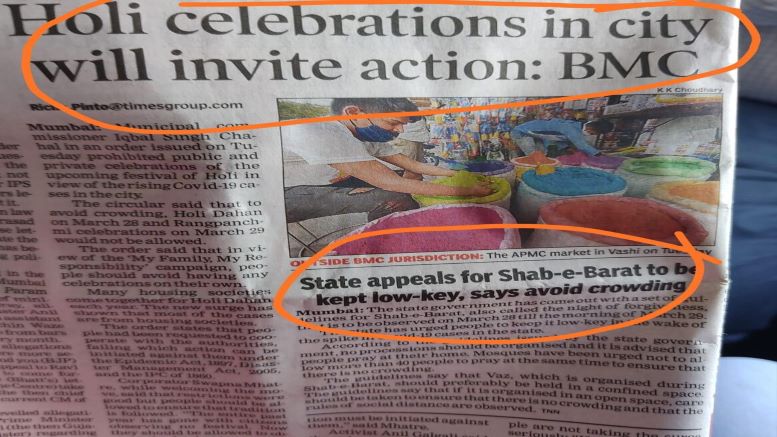 Shiv Sena-controlled BMC (Brihanmumbai Municipal Corporation) has imposed a total ban on the upcoming Hindu festival of Holi while issuing guidelines for the Islamic festival of Shab-e-Barat asking them to keep the celebrations ‘low-key’. This is how secularism works where Hindus are issued diktats not to celebrate their festivals and threatened with ‘action’ while others are given leeway as they are ‘minorities’.

If the second wave of the pandemic were the real concerns of the Maharashtra government then shouldn’t they implement the same rules for all citizens irrespective of religion?

Even though Shab-e-Barat is supposed to be a night of ‘begging forgiveness for sins’ by congregating in mosques and graveyards, it often translates to hooliganism on roads where youngsters are seen putting their lives as well as that of others under risk through rash driving and motorcycle stunts late at night after group prayers. So how does this public celebration not pose a health risk, if even private Holi celebrations are banned by BMC?

Readers may recall that earlier this month Maha Shivratri was celebrated by devotees while ensuring that all pandemic norms and guidelines are followed to the tee throughout Bharat. While both Trimbakeshwar Temple in Nashik and Babulnath Temple in Mumbai remained closed for devotees.

In contrast to the diktats issued to Hindus alone by BMC, Nagpur Municipal Corporation has been more even handed and banned both Holi as well as Shab-e-Barat celebrations keeping in view the Chinese Virus pandemic.

The interesting thing is that Hindus have always shown far greater willingness to abide by the law compared to the ‘minority’ community which resents being told what to do and has launched several attacks on front-line workers for ‘intruding’ in their localities. But, ironically, this has led to greater intimidation and bullying of Hindus by the state, while the ‘minority’ is treated with extreme deference, and all actions are discussed with their religious leaders and community representatives before being announced to public.

A similar secular game was in view for the ongoing Haridwar Kumbh Mela as well. Initially, district administration announced that a Covid-19 negative RT-PCR report, of a test done within 72 hours, would be mandatory to attend the mela. When devotees protested and demanded that temperature screening and mask enforcement can be done as is being followed in other public spaces, and that not all devotees could bear the cost of an RT-PCR test (~ INR 750 – 1000), the new Uttarakhand CM announced that no test report would be required. But, as often happens, courts stepped in to overrule the CM.

Secularism does not mean one religious denomination being favored over the other but the Hindu majority of Bharat has always been treated with contempt by the secular establishment. Therefore, low-key celebration appeals to Muslims and a total ban on Hindu festivities comes as no surprise.  In fact, Delhi, Mumbai, Gujarat, Odisha have all banned public celebrations of Holi.

Many citizens are nonplussed that while administrations all over the country bring out rulebooks and fines when Hindu festivals are around the corner, or when it is a question of opening Hindu temples or allowing small businesses to operate, the same rules evaporate when activities considered ‘essential’ by the secular state, such as election rallies or never-ending protests, are in question.

In today’s Bharat, secularism has become an easy stick to beat Hindus with.