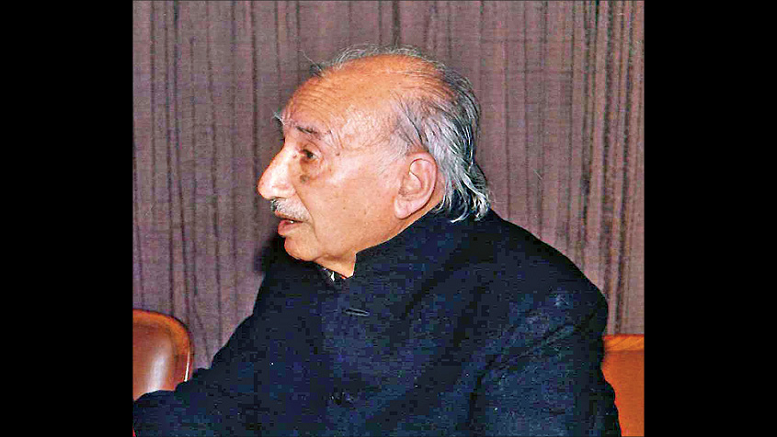 He with 200 other RSS volunteers guarded Srianagar Airport When Pakistan Attacked In 1948. He launched RSS in J&K and was instrumental in launching ABVP.

“A Hindu State has never been a theocratic State. Secularism is inherent in the Vedic concept: ‘God is one, wise men call him by many names’. It implies that He can be reached by many paths and there can be no monopoly of truth. That is why when Islamic theocracy was running riot in large parts of India, Shivaji had set up a truly secular Hindu State,” Prof Madhok wrote in his magnum opus, Rationale of Hindu State (1982).

Balraj Madhok was born in Skardu, Baltistan and spent early childhood at Jallen. He studied in Srinagar, the Prince of Wales College in Jammu and the Dayanand Anglo-Vedic College (DAV College) in Lahore, graduating with B. A. Honours in History in 1940.

While nationalism succeeded in unifying countries like Italy and Germany, in Bharat, Muslim separatism based on Millat and Kufr, Dar-ul-Islam and Dar-ul-Harab and jihad led to Partition. Therefore, in Hindu Rashtra: A Study in Indian Nationalism (1955), Prof Madhok defined nationalism as the “consciousness of being a nation, the existence of a supreme group sentiment, which demands loyalty of the individual when it comes in clash with his loyalties to other groups—social, political, economic or religious—to which he may belong… It is the Hinduness or Hindutva of a man which makes him a national of India.”

While studying at Jammu, Balraj joined RSS in 1938 and became a pracharak in 1942. When he moved to Srinagar as lecturer in DAV College, he expanded RSS network in Kashmir Valley. When the Hindu refugees started arriving in Srinagar after the Partition, many also joined the RSS.

From these refugees Madhok gathered advance intelligence of the invasion by the Pakistani raiders on 21 October and passed it on to the authorities. On the request of Maharaja he mobilised 200 RSS volunteers to defend Srinagar airport on 23 Oct which turned out to be crucial.

In Nov 1947, he found Praja Parishad Party. The party demanded the complete unification of Jammu Kashmir with Bharat, in opposition to the loose autonomy negotiated between Abdullah and Nehru (Article 370), Madhok was banished from J&K by Sheikh Abdullah for his political stance.

In 1961, he entered Loksabha through Delhi.

He was the first Parliamentarian to raise the issue of Ram Janmabhoomi at Ayodhya. Participating in a debate on “emotional integration” in the Second Lok Sabha on 1 September 1961, he appealed to Muslims to restore the temples at Ayodhya, Kashi and Mathura to Hindus and assured them of allocating separate land for erecting mosques nearby.

In 1966-67 he became Jansangh President and under him it won 35 MP seats, the highest. Madhok wanted to align with Rajaji’s Swatantra party and also Congressmen who came out of Congress in 1969, Vajpayee was against this and Madhok got marginalised.

In 1973, L K Advani expelled Madhok for 3 years. (Party with a difference, where else can we find expulsion of founder). Madhok got arrested and was in jail for 18 months during emergency.

Coming out he joined Janata Party which in turn partnered with Jansangh. Madhok resigned in 1979 and turned to revive Akhila Bharatiya Jana Sangh unsuccessfully.

Later he stopped politics and concentrated on writing books. He authored many books which sheds light on what happened in Kashmir, the Muslims problem, the politics during Nehru-Indira era and also he criticised Vajpayee, Advani and RSS for interfering in politics.

Balraj Madhok had married Kamala, a professor at DU. He had 2 daughters, Balraj passed away in 2016.

He witnessed partition of his Janma Bhoomi (Baltistan), Karma Bhoomi (Kashmir) & also the party he founded.

Describing Indianness he wrote: “It is not the birth in India but the Indianness of a man which makes him an Indian… This Indianness of a man is not determined by one’s colour, caste, language, way of worship or political party. It is determined by the mental attitude towards India and all that is distinctive about her as a nation. People like Mrs. Annie Besant, Sister Nivedita and Mr. Stokes became better Indians and did more for India in our own times than most of those born in India did, even though they had been born and nurtured outside India. On the other hand, men like Mr. Jinnah, Liaqat Ali Khan and Kasim Rizvi though born and brought up in India turned out to be India’s worst enemies.”

(This article has been compiled from the tweet thread of @sheshapatangi1.)