After the Kathua rape & murder case came to light, all platforms of social media were deluged with deplorable art-pieces on Sri Ram. Paintings of Trishul covered with a condom went rife like a virtual epidemic. Temples, Hindu Goddesses, our Dharma, Devi-sthan and Hindu-sthan – none was spared by communists, Islamists, and the self-appointed torch-bearers of (selective) morality in Bharat.

Bollywood bimbos, the semi-educated school drop-outs, employed the plight of a dead child to sell the tickets of their archetypal Bollywood Masala flick. Huma Qureshi, too, stood with her placard of protest. Interestingly, Huma’s mother hails from Kashmir, the blood-seeped land that stood witness to hundreds of unaccounted rapes of Hindu women by Islamists. 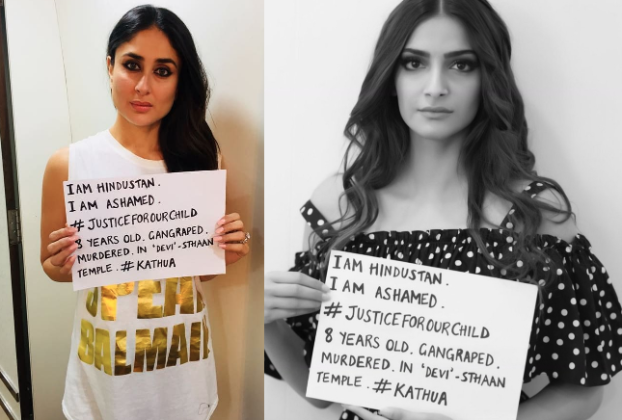 Some of these self-styled seculars of Bharat were not born at the time of the last Kashmiri Hindu exodus from the valley in 1990; they were still a molecular drop of semi-transparent fluid in their daddy’s baby-sack. Hence, not a single word of denunciation for that barbarity escaped their lips.

The Kathua minor, her faith notwithstanding, was a child who was robbed of her life. Raped in a Hindu temple or not, is secondary. Unanimously, we are unified in mourning her being taken away too soon.

But why must we tolerate the loud, lousy, parasites attacking our culture, bloviating against our gods and flinging muck at our venues of worship, and concede to their uncorroborated accusations?

These are the same shriveled vermins who climb up their beds and resume their beauty sleep when a Muslim man violates a Hindu woman, a Hindu girl, a Hindu child. Remember 2-year-old Tinkle Sharma? The toddler was tortured to unspeakable extremes before being brutally murdered by a man belonging to a minority – the hapless minority rendered ‘defenseless’ in Modi’s Bharat defined by radicalized Hindutva, if you believe the left-liberal propaganda.

Did you see liberals, who had tweeted pages after pages over Kathua, spend a word for Geeta, Aarti,  Twinkle Shaw, or the Mandsaur 7-year-old? The possibility of seeing them being profuse in their castigation of the culture and mentality that engaged in such inhumanity, remains a far cry.

Farhan “poor General Knowledge-Modi hating gasbag” Akhtar seems to have gone on a social media hiatus after the Tinkle Sharma incident, and Sonam “my best friends are Pakistani” Kapoor came out to deliver a sermon on how rape must not be weaponized against any religion.

And this is not just one isolated incident. There seems to be a passionate attempt of giving rapes of Hindu women by Muslim men an acceptability and making it a part of our common culture. It is appalling how social media platforms like Facebook furthers this heinous agenda by removing news articles reporting the incidents of such rapes.

A 15-year-old Dalit minor was gang-raped in Uttar Pradesh’s Kaushambi by two brothers – Mohammed Chotka & Mohammed Badka – and  Mohammed Nazim. The monstrosity was filmed and posted on social media. The child begs, ‘Bhaiya aap mujhe jaante ho, Allah ki kasam mujhe chhod do’ (Brother you know me, for Allah’s sake let me go). The perpetrators quip, she should be glad there were not 20 of them like other days.

The severity of the incident was enough to ideally send tremors nationwide, and potentially shake up the United Nations, but alas! This was not a Muslim child, and no one wishes to be tagged a bigoted Islamophobe by calling out rapists with Muslim names.

It’s futile to expect any word on this from the likes of Rana Ayyub of the Washington Post, or Arfa Khannum of The Wire, but the man who has bagged awards after awards asking people “Kaun Jaat Ho” (which caste are you from?), the self-designated messiah of the Dalits, couldn’t string in 5 words expressing his sorrow (if any) on this shameful incident.

What’s worse? During the Kathua case last year, we witnessed flocks of Hindu seculars with over-brimming humanity, taking to social media to voice out their absolute collective shame to be part of such a community, follower of such a faith system. “I am ashamed to be a Hindu” they wrote on their walls.

But like the Eid Mubarak that never finds a reciprocation on Janmashtami, we didn’t see Muslim liberals feeling ashamed of the deeds of their co-religionists. Unlike the caricatures of Sri Ram, no brush found the galls to paint a denigrating image of the ‘Almighty’ whose followers refused to back off from satiating their lust with a child.

Pretentious virtuousness is a virus that attacks the Hindu genes only, while others may showcase an abject absence of moral fiber altogether. And these two opposing extremes in the realm of human behavior is what could bring about the downfall of the Hindu civilization.