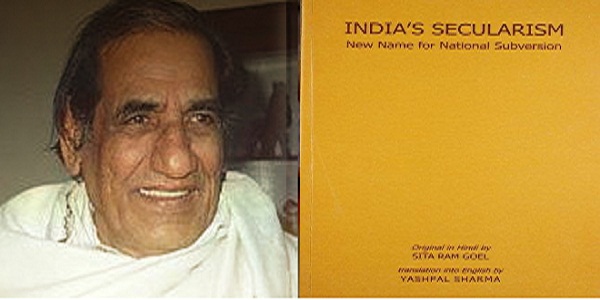 Late Shri Sita Ram Goel was one of the greatest Hindu thinkers, a writer and political activist who wrote extensively on the damage to Hindu culture and heritage brought by expansionist Islam and missionary activities of Christianity. In his seminal book “India’s Secularism-New Name For National Subversion”, he has listed seven important contrasting attributes that differentiate between Advaita & Monotheism in terms of ways of worship. These seven attributes and historical facts clearly show that Monotheism is basically religion with imperialist connotations. Due to this reason, Monotheism is different from Dharma that lacks imperialist connotations. As my tribute to Shri Sita Ram Goel, great son of Bharatvarsha, I have summarized his observations below :

1st Proposition of Advaita: Polytheism is central to Advaita, where multiple gods and goddesses are symbols of one infinite, ineffable and indescribable supreme power. Mr. Goel here refers to a couplet of Goswami Tulsidas- “Hari Anant Hari Katha Ananta-God is infinite and so is his narratives and stories”. So even a minuscule part of cosmos can be considered divine as it is reflection of that infinite itself.

2nd Proposition of Advaita: In Advaita, gods and goddesses can assume any animate or inanimate form, namely human male or human female, plant, animal, stone, mountains and rivers etc. This indicates that all animate and inanimate world is pervaded by one Supreme Being and devotee can worship that in form of her choice.

3rd Proposition of Advaita: In Advaita, not only there are different forms to worship, a devotee can choose different ways of worship or develop her own system to worship divine. The object of worship and mode of worship cannot be at fault, but fault can only lie in quality of devotion. Mr. Goel refers to a couplet of Goswami Tulsidas to illustrate this. “Jaki rahi Bhavna Jaisi, prabhu murat dekhi tin taisi – Level of devotion of a person determines level of connect to god”.

4th Proposition of Advaita: In Advaita, TRUTH is impersonal and eternal. Anyone can seek and experience the TRUTH directly without mediation of any other person. TRUTH remains “same” for him as well as for those who could seek it in past and who would seek it in future. No one can claim the monopoly of having experienced REVELATIONS which is the only valid TRUTH overriding all claims of past and future.

5th Proposition of Advaita: Man should hold those beliefs which are consistent with reason and can be verified ultimately at some level of human consciousness. So teachings of some higher spiritual persons should be verifiable by others reaching same spiritual level.

6th Proposition of Advaita: The whole world is one family – Vasudhaiv Kutumbakam. Each member of this one family should reciprocate “considerate conduct” from others. Do not do unto others what you find unpalatable to yourself.

7th Proposition of Advaita: Advaita considers superiority of humans over other parts of nature, only for spiritual seeking. As Universe manifests different animate and inanimate limbs of one Infinite power, these limbs are not meant for unbridled consumption and humans need to cultivate a relation of friendliness, while seeking sustenance and livelihood from them.

1st Proposition of Monotheism: Central to Monotheism is that creator and controller of Cosmos is the One God who is unique, who remains outside cosmos and does not manifest himself in different forms, and hence worship of any other god or goddess inside cosmos is not permitted. Considering any part inside cosmos as divine, is a serious crime against the One God.

2nd Proposition of Monotheism: In Monotheism, one God created the Cosmos without aid of any substance out of sheer void or nothing. He remains out of this Cosmos as omnipotent. So destruction of animate or inanimate parts of cosmos for unbridled consumption is not against his wish. Since he resides outside Cosmos, worship of any part of it is not to his liking.

3rd Proposition of Monotheism: Human male is highest creation of One God, as he was created from One God’s own breath blown in to a clay figure. That breath became soul of this human male. In Monotheism, it is not very clear if human female also has soul, as human female is made from one piece of rib of human male. All other parts/limbs of cosmos (animate and inanimate) are made for enjoyment of human male.

4th Proposition of Monotheism: Man has only one life which needs to be devoted for exclusive worship of One God as per the commandments of One God. Since direct contact with One God is not possible as Man remains inside and One God remains outside cosmos, so to help the Man in dark, One God sends his Messengers to Cosmos from time to time, to reveal those Commandments to the Man. Here, the last Messenger pronounces the final commandments that supersede all commandments spelled out by previous Messengers. One God also sanctions in these Commandments, that those who do not follow these commandments, their lives and properties be confiscated.

5th Proposition of Monotheism: After advent of last Messenger two events take place. Here history of mankind is divided into two parts, namely of Darkness before revelations by last Messenger and of Enlightenment after that. Firstly, whatever modes of worship and culture prevailed earlier need to be erased as symbol of darkness. Secondly, existing mankind is again divided into two groups, one who believe in last Messenger’s message and obeys it and another who has doubt or challenges Last Messenger’s revelations. The believer group is loved by One God, and second group invites his wrath.

6th Proposition of Monotheism: As per this proposition, the Sovereignty of whole world is bestowed to last Messenger and through him to group professing complete faith in him. As One God has also confiscated life and properties of those who do not follow last Messenger’s commandments, it becomes sacred duty of the first group to wage ceaseless Jihad against the second group, and either make that group submit to last Messenger’s commandments or annihilate it altogether. Those who are annihilated, their properties and wealth should be confiscated and their families be made slaves.

7th Preposition of Monotheism: As per this proposition, on last day of Judgement, all those born from beginning to end of creation will rise from their grave and present themselves before one God. The last Messenger will reappear and sit beside One God giving account of good deeds and bad deeds to the One God for each human. Those who had professed full faith in One God will be sent to Heaven containing all the objects of Enjoyment. Those who rebelled would be sent to hell. It is important that ONLY FAITH and NOT CONDUCT will define who goes where.

Readers can very well appreciate why Late Sita Ram Goel says – Monotheistic religions are not same as Dharma as per Advaita philosophy of worship of supreme power.