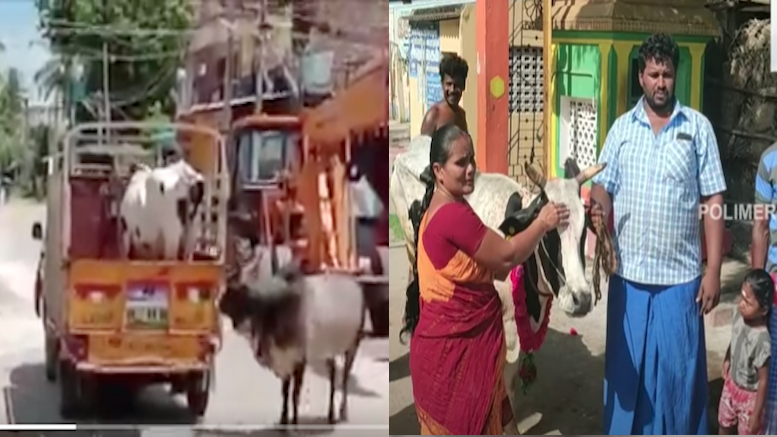 In a heartwarming turn of events, a temple bull and its cow friend were reunited to the joy of locals who couldn’t bear to see the forlorn bull.

In Madurai, a villager Muniandi Raja raised a cow, Lakshmi. As per local media reports he is a chai wala (tea seller) struggling for finances due to the nation wide lockdown imposed to curb the spread of COVID-19. The temple bull of Manjamalai temple bonded with Lakshmi while eating the vegetables, fruits and hay given to the cow by Raja.

As it is a temple bull, Raja was not bothered by the fact that it was sharing Lakshmi’s food. Temple bulls in general are loved and fed by everyone in the vicinity of the temple. Temple bulls are the first to be let out in Jallikattu during Pongal (Makar Sankranti) celebrations. Many temple bulls have the reputation of never being caught and are admired by Hindus.

Raja who has been struggling to make ends meet decided to sell Lakshmi as he couldn’t provide for her upkeep anymore. After she was sold, Lakshmi was to be taken to the buyer’s place on a mini lorry. As she was being loaded into the lorry, the bull started protesting. He wouldn’t let the vehicle move an inch and tried to attack the driver as well.

Watch: Bull tries to stop a vehicle carrying its friend which is a cow pic.twitter.com/eMuPuxA2HQ

After an hour long ordeal, the driver somehow managed to trick the bull and started the vehicle. As he drove away the bull started running behind the lorry. He is said to have ran up to a kilometre after which he stopped as he lost his breath. This wrenched the heart of onlookers who recorded the video of the bull chasing the vehicle and it soon went viral on social media. It was reported by Tamil news channels which attracted the attention of V.P. Jayapradeep, son of TN Deputy CM, O. Panneerselvam.

Jayapradeep, with the help of his friends, located the buyer and bought Lakshmi back. Now he has donated Lakshmi to the Manjamalai swami temple and reunited the temple bull with Lakshmi. He has also donated some amount to take care of Lakshmi. He has been quoted as saying, “The scene of the bull chasing the vehicle as he couldn’t part with the cow melted everyone’s heart. This grabbed the attention of the Deputy CM on whose orders we have bought the cow and given her to the temple administration.”

Social media users who were earlier upset about the bovines’ separation, praised the son for reuniting the friends and the father for bringing up such a rooted dharmika son. It must be remembered that it was during the tenure of O. Panneerselvam as Chief Minister that the legislative amendment to allow Jallikattu was passed.

In other good news for Hindus, temple elephant Lakshmi has returned to her home at Manakula Vinayagar temple in Puducherry after she was cruelly snatched away by anti-Hindu organisations under guise of animal rights activism.

Sudhanshu Singh: The politics of international aid and humanitarian assistance