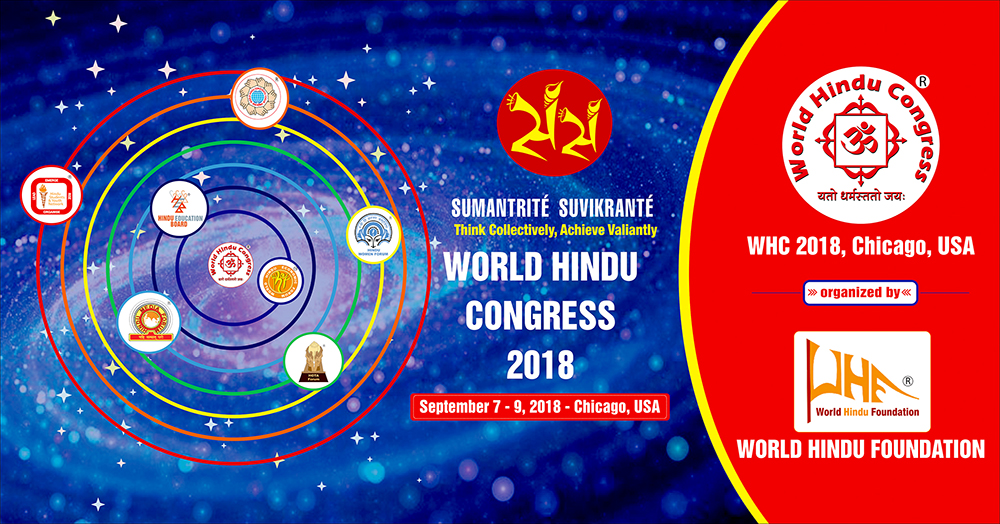 As dawn breaks, Swami Vigyananand ji hops on to his bicycle and pedals to a park close by. He meditates and practices his asanas in the midst of nature, then laces up his shoes to alternately jog and walk for a good number of miles.

After a simple sattvic meal, this IIT Kharagpur graduate and renowned scholar of Bharatiya scriptures is ready to put in a full day’s work. As Joint General Secretary of the Vishwa Hindu Parishad and founder of the World Hindu Congress, the World Hindu Economic Forum and the Hindu Emergency Aid and Relief Team (HEART), he needs all the focus and energy his morning routine gives him.

Currently, Swamiji is busy campaigning for the Second World Hindu Congress to be held in Chicago from 7-9 September, 2018.

The conference, which attracts prominent Hindus across the world, is the largest global platform for Hindus to connect, share ideas, introspect towards improvement and seek solutions to challenges facing the community. It coincides with the 125 th anniversary of Swami Vivekananda’s iconic address in Chicago’s Parliament of Religions in 1893 – a speech that prompted many Americans to explore Hindu spirituality.

Why is this conference so important? Swamiji, who switches between chaste Hindi and English easily, explains that to “graduate to collective success”, we must encourage wealth creation, affordable quality education, promote a robust Hindu presence in mass media, cultivate future Hindu leaders, tap the unique strengths of Hindu women and encourage all Hindu organizations to work together. This, he states, is the only way to increase our sphere of influence and have a positive societal impact.

We are “unlike any other immigrant community”, he adds, we are highly educated, professionally and financially successful but we don’t highlight our achievements enough. We need to become more than a “dandiya, garba and bhangra society,” we need to create awareness about our sizeable contributions, be visible and exercise our influence at the global level.

Conferences such as this, he hopes, will remove the apathy that currently exists among a vast majority of Hindus, promote unity and dispel misconceptions about Hindu philosophy.

Born in a small village near Banaras, Swamiji’s sharp mind took him to IIT Kharagpur – Bharat’s premier technology Institute. After his B. Tech, he didn’t take the predictable route of a lucrative job but dived into a 12 year study of Bharatiya history, heritage, Vedanta, Panini’s Grammar and the Shastras. This proved to be a turning point in his life. The sheer richness of Hindu writings that were “compiled, protected, and transmitted through the most difficult times” by our ancestors motivated him to work at preserving this knowledge for successive generations. Swamiji reads a portion of the Gita every day and his favorite teaching from the scripture is aptly enough “never lose your focus.”

The global pracharak, as he is also known, works with Hindu youth from Fiji to Finland and is impressed with their diligence and dedication. They are capable, talented and educated, he says, but need to be introduced to their rich heritage. His singular goal, he emphasizes, is to ignite this awareness among Hindus across the globe and conferences such as these are “only the beginning.”

To learn about or participate in the 2018 World Hindu Congress, visit http://whc.2018worldhinducongress.org

(This article first appeared at www.india-herald.com)