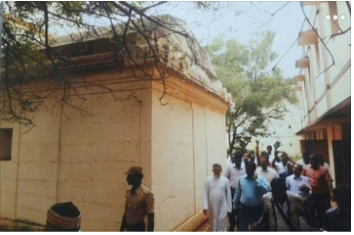 As national media is discussing the issue of Hindu Jagran Manch’s actions against Christian schools collecting money from Hindu kids (who constitute the most, sometimes all their strength) for Christmas celebrations, missionary activities and the church’s atrocities in wiping out the indigenous people and its culture goes unnoticed even by the local media.

Four days ago, Hindu Munnani which identifies itself as Hindu Jagran Manch of TN protested against the police and revenue department officials for inaction against the church management that failed to follow the court orders in a village called Serndamangalam in Tirunelveli.

The Hindu temple Sarveswaran Kovil, which the locals and Hindu activists claim to be of 11th century, is encroached by a Roman Catholic Church for St. Peter and Paul. The temple and its ₹100 crore worth properties were encroached by the church during British rule. Hindus were supposedly being ‘allowed’ to worship, perform pujas and hold festivals until as recently as 2012.

One might wonder why the church was allowed to exercise such hold over what is rightfully Hindus? First, government officials were approached and VHP protested in July, 2013 when there wasn’t any proper response from them. Around November, 2013 they got the revenue department to take over the land belonging to the temple thus preventing Christians from using it effectively as per a Hindu Munnani leader’s FB post.

After that a PIL was filed in the Madurai bench of Madras HC seeking a direction to the Archaeology Department to declare Sarveswaran Temple in the village as an ancient monument and protect it from destruction, to stop the church from trying to damage the temple and erase the evidence of its existence. Apparently the court instructed the church management to not disturb the temple structure during its renovation work as per Hindu Munnani’s claim.

“The petitioner sought directions to the state’s archaeology department to notify the temple as an ancient monument and to the collector take over the temple property.

According to the petitioner, the church management encroached on the temple land during the British rule and constructed the church after demolishing the temple’s entrance. It allowed the villagers to celebrate temple festival till 2012, but after that even that was denied, the petition said.

In 2005, the church initiated action to get some more land, but the special commissioner and commissioner of land administration in Chennai refused. When the church management constructed a shopping complex in 2013 on the temple land, the Tahsildar passed an order on April 22, 2013 to remove it, the petitioner said.

When the matter was brought to the notice of the District Superintendent of Police, an archaeological officer was appointed to study the issue. He visited the temple site on October 7, 2013 and filed a report saying there was no co-operation from the church management and he was restrained from entering the temple, the petitioner said.

Further, the inspector of the Hindu Religious and Charitable Endowment department said in a report dated March 17, 2014 that the church had encroached on the temple land. After hearing the matter, the bench granted an interim injunction and adjourned the matter by three weeks to enable the government and the church to file their replies.”

The petitioner’s counsel said that the temple had a ‘Lingam’ in the garbagriha and deities sculpted on its pillars, which makes it necessary to have an expert committee set up under the guidance of an archaeologist to study the structure. The church’s counsel contended that cases have been filed against the orders of the commissioner of land administration and the tahsildar and are pending.

The court issued a restraining order to the church management to not make any further construction or alteration at the site of the 1000 year old temple. It went on to constitute a team of four advocates to hold discussions with the warring groups and resolve the dispute.

The judges’ reaction seem undermined as the counsel of the petitioner told the court that parish priests of St. Peter and Paul Church had destroyed many ancient idols and artefacts belonging to the temple believed to have been constructed somewhere between the 11th century and the 14th century. The church’s advocate tried to justify its wrong doings by saying “the church had been in existence for more than three centuries. It had purchased lands in the village in 1894 and had been running a school for the benefit of the local people”.

We can’t form opinions based on MSM reports on the court proceedings. But the lack of coverage and the judiciary’s behaviour in the limited sources that could be found, do not put them in good light.

Meanwhile, Christians call the St. Paul and Peters Church as Sarveswaran Kovil claiming that it’s called so because people of every faith come to the church to get their problems solved. Even the Roman Catholic Church of Tenkasi and Palayamkottai diocese webpages claim the same. Further, the Palayamkottai diocese page cleverly says that it was built by a Hindu landlord using the stones of a dilapidated Hindu temple.

However, Hindus say that the church is built on and around a temple structure. During the renovation work of the church they were denied access to the temple, and attempts were made to erase the temple structure. Hindu organisations like VHP protested along with villagers and Hindu saints many a times, till as recently as a couple of weeks back, against the church’s plan to usurp the temple and its lands. It is said that a Mandapam opposite the Sanctum Sanctorum of the Eshwara temple was revealed when the church underwent renovation work. A FB post gives the pictures of a stone structure with inscriptions as part of the Mandapam.

The church management minded neither the government authorities nor the judiciary and went on to build the church. Barely two weeks after the PIL was filed, the parish priest prayed the court to direct the SP, DSP and inspector to provide protection for conducting St. Peter and Paul’s feast festival. These are the words the learned judges had to say-

“Respondents have mutually agreed to have the car procession without touching upon the stones laid on the disputed area…Govt. Advocate is also directed to give necessary instructions to the police authorities to deploy adequate police personnel for safeguarding the interest of the devotees”

No one to worry about the safety of the Hindu devotees though, as they were attacked by a mob of Christians (gathered by ringing the church bell) when there was a conflict as they picked fights with a Hindu for drawing the image of Eshwara on his wall. 5 Hindus, including 2 women, got wounded in the assault. It seems a Hindu cannot even have an image of his ishta devata for it offends the seculars and earns him the ‘communal’ tag.

It is alleged by local villagers that Congress politician Peter Alphones’ relatives are involved in encroachment and land jihad on the temple lands. Encroachers entered a local Hindu Munnani (HM) leader’s house and threatened to kill him. When HM members complained in the local police station, the Christian inspector asked them to make a compromise, arrested one of the perpetrators and let off the others.

Evidently, Hindus are on their own, as after all the hardships they went through to establish the presence of the temple through the not so helpful government agencies, the court finds the issue to be an ‘unwarranted fight’ between two parties and ‘petty differences between a few individuals’ which should not lead to communal disharmony. Even as this issue was going on, the same parish built toilets for its church (built during the British rule) and other assorted buildings on a hill in the nearby village where a 7th century rock cut cave temple built by Pandyas is present.

VHP and other Hindu organisations protested and stopped the construction for the time being. The final result is unclear though. This temple is under ASI protection as 10,000 year old neolithic tools were found in and around the hill. This forbids anyone from digging holes in a 100 meter radius which was breached by the church as it built 20 toilets on the hill. ASI rules and regulations aside, hills in general  and those associated with temples are sacred to Hindus which makes building toilets on a sacred space as deliberate hurting of religious sentiments.

But irrespective of our democratic institutions’ apathy towards their plight, ordinary Hindu in Tamil Nadu are still fighting, men and women alike, against the atrocities of the Church strengthened by its Dravidian and secular political connections. Might there be a day when we are asked to stop breathing as it might cause communal riots, since minorities have more right on anything that is rightfully ours?