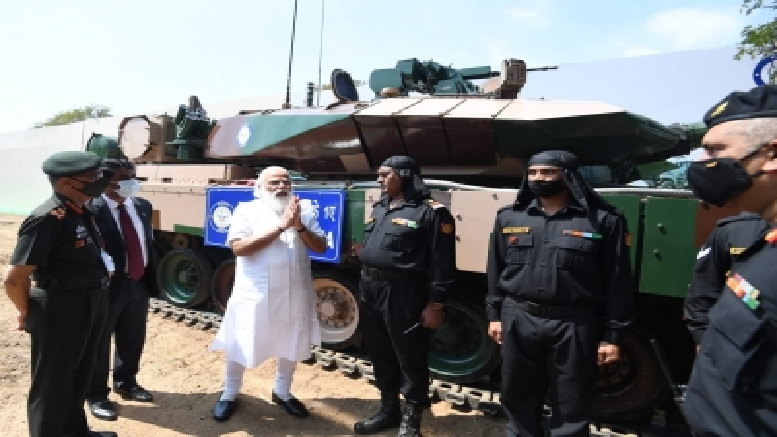 Prime Minister Narendra Modi on Sunday handed over the indigenously developed Arjun Main Battle Tank Mark 1A to the Indian Army here and said Bharat believes in peace but will protect its sovereignty at all costs.

Fifteen academic institutions, eight labs and several MSMEs were also involved in the project. The Defence Ministry had recently cleared the induction of 118 Arjun Mark 1A tanks into the Indian Army, costing around Rs 8,400 crore.

Stating that one of the two defence corridors is in Tamil Nadu, Modi said it already received an investment commitment of over Rs 8,100 crore.

“A tank made in Tamil Nadu will be used to defend our borders in northern Bharat. This shows the united nature of Bharat,” he said. Modi said Bharat believes in peace but it will protect its sovereignty at all costs. He recited Bharatiyar poem in Tamil to highlight the importance of defence projects in the country.

Modi also paid homage to CRPF personnel who lost their lives in the terror attack at Pulwama two years ago. “No Bharatiya can forget this day. We pay homage to all the martyrs we lost in that attack,” he said.

He also mentioned about the support provided to displaced Tamils in Sri Lanka and the Tamil fishermen captured by Sri Lanka. He declared that there are currently no fishermen in Sri Lankan custody.

Later, at a programme held at Jawaharlal Nehru Stadium, the Prime Minister either inaugurated or laid the foundation stone for a slew of infrastructure projects.

Modi, who began his speech in English by greeting people with ‘Vanakkam Chennai’, praised the enthusiasm of the city.

“Chennai is full of energy and enthusiasm. It is a city of knowledge and creativity. From here, we begin key infrastructure projects. These projects are symbols of innovation and indigenous development,” he said.

The Prime Minister also inaugurated the Chennai Metro Rail Phase-I extension completed at a cost of Rs 3,770 crore and flagged off passenger services from Washermenpet to Wimco Nagar. He noted that the work was completed on time despite the Covid-19 pandemic. He said the material for the 9.05-km stretch was procured locally and supports his idea of ‘Aatmanirbhar Bharat’.

Modi also inaugurated 22-km fourth railway line between Chennai Beach and Attipattu. It will be an additional track to Thiruvallur districts meant to ease traffic from Chennai Port.

Railway Electrification of single line section in Villupuram – Cuddalore – Mayiladuthurai – Thanjavur and Mayiladuthurai-Thiruvarur completed at a cost of Rs 423 crore was launched by Modi. He said this will be a great boon to delta districts. The electrification of this 228-km route will enable free flow of traffic without the need for a change of traction between Chennai Egmore and Kanyakumari.

The Prime Minister laid the foundation stone for the Discovery Campus of IIT-Madras. The campus is to be built at Thaiyur near Chennai at an estimated cost of Rs 1,000 crore in the first phase, over an area of 2 lakh sqm. He exuded confidence that it will very soon be the leading centre of discovery and draw the best talent from all over Bharat.

The Prime Minister also laid foundation stone for the extension, renovation and modernisation of the Grand Anicut Canal System, which is an important source of irrigation in the delta districts. The modernisation of this canal system will be taken up at a cost of Rs 2,640 crore.

He recited a poem on the importance of conserving water, and said that the aim is to maximise each drop of water available. “Always remember the mantra of per drop, more crop,” he said adding that conservation of water is a global issue.

Deputy Chief Minister Panneerselvam welcomed Modi and thanked him for the interest he has taken in the progress of the state. He praised the Prime Minister’s work ethic and referred to his recent emotional speech in the Rajya Sabha.

(The story has been published via a syndicated feed with minor edits to conform with HinduPost style guide.)