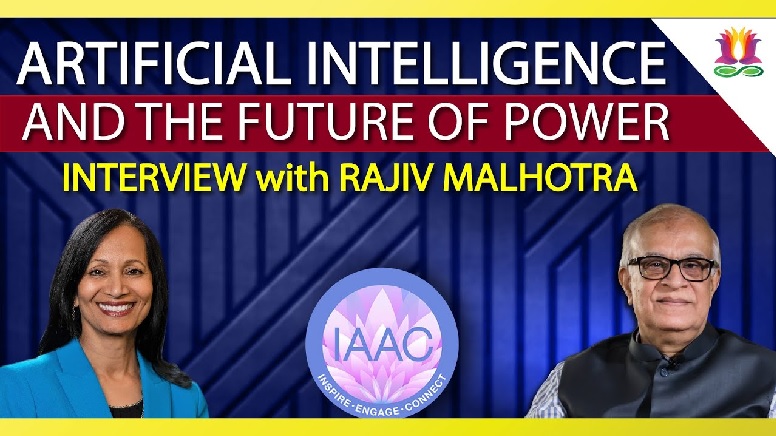 Several years back when a friend introduced me to the book ‘Breaking India‘ by Shri Rajiv Malhotra, I had no idea that it would be a life changing book for me. Since then, I have diligently  read every book by this  pathbreaking scholar  and researcher, author, speaker and public intellectual on current affairs as they relate to civilizations, cross cultural encounters, religion and science.

We are swamped by  myriad manifestations of Artificial intelligence (AI)  in our everyday lives.  Whether one is a compulsive social media user, avid surfer of the Internet  or the millions of electronic gadgets that  populate  the human landscape, and its impact in  every filed of human endeavour, AI is a powerful pervasive presence in our lives.

In his book, Shri Rajiv Malhotra highlights that he uses the term AI not in its narrow technical sense but rather “as  an umbrella term that includes the entire ecosystem of  technologies  that AI propels forward as their force multiplier. This cluster includes quantum computing, semiconductors, nanotechnology, medical technology, brain-machine interface, robotics, aerospace, 5G and much more.”

For someone like me  whose engagement with technology is only at an extremely simplistic and superficial level, the book was an eye  opener in several ways. Ironically, the author himself, who  admits to his passionate love for “physics and philosophy” was a graduate student in the US specialising in AI in the early 1970s, when the field was nascent.

“My lifelong quest has been to understand  the nature of intelligence, both  natural and artificial, and how  it plays at various levels…. Fast forward a quarter century. I have recently reconnected with AI, a field of research that has been reborn as a new force. Artificial Intelligence is amplifying human ingenuity and is the engine driving the latest technological disruption, silently shaking the foundation of society. “

Describing AI as the “holy grail of technology,” Shri Rajiv Malhotra  argues that AI is a double-edged sword that  must be wielded with care and caution. While it has the potential to offer solutions and problem-solve in every domain of our lives, it also disrupts several delicate balances and equilibriums and creates conflicts at various levels in society.

In an episode on Truth Matters hosted by Savio Rodrigues, editor-in-chief, Goa Chronicle,  Shri Rajiv Malhotra compares the AI hegemony to digital colonisation, that is eerily reminiscent of the political colonisation inflicted by the British across the world.

“Colonisation was an emotional, psychological and intellectual surrender by what was perceived as a sub culture to the powerful culture. Foreign devatas like Facebook, Twitter and Google adjudicate the way the East India Company was adjudicating between political rivals and stir up riots between religious communities.  AI allows this to be done on a much bigger scale with simultaneous spread!” explains Shri Malhotra.

Over the last several decades, the author admits that he has been increasingly concerned about the ever increasing footprints of AI and data mining in the Bharatiya landscape.

“It seemed naïve how as citizens of a particular nation we do not pay attention to how data precious to  us is made so readily accessible and available to global corporations without our consent or awareness of its implications.  Given my background in computer science and as a technocrat, I was compelled to write this book in times of digitisation.“

He further adds, the “iconic moment” for him was  a “disturbing development” five years ago  when “big data” from the Kumbh Mela was given away to American think tanks and universities despite his  appeals to the political establishment to desist from such a foolish move.  Dismayed by the widespread political apathy  and indifference, Shri Rajiv Malhotra decided to “go public” with his years of painstaking research on the destabilising fall out of AI which has resulted in the spellbinding book.

The author explores the complex ramifications of AI and its impacts in a lucid and accessible manner. According to  him,  AI  plays a pivotal role in each of these disruptions. In addition, each of the following “battlegrounds” has multiple layers with “competing interests and high stakes”:

It is disconcerting to note how AI exacerbates and amplifies the already existing cracks, fissures and fault lines. The major disruptions in our lives are both predictable and unpredictable; desirable and undesirable.

“Cleary, AI is a major disruptive influence, one that to date has not been properly understood or even discussed, outside the circle of its experts. A great deal has been written on AI’s gifts to the world, but not  enough on its risks. My goals are to balance the discourse and empower the advocates that speak for the underdogs in these conflicts. The emphasis of this  book is to examine society’s vulnerabilities to the impending technological tsunami. I hope it will shake up the thought leaders that need to be better informed and more engaged.”

The book looks at truth straight in the eye. And in doing so, it does not pain  a dystopian picture but warns us of the perils and pitfalls that need to be negotiated with  caution and wisdom.  People in our country still don’t understand the gravity of AI. AI is like the tip of an iceberg, which is only partly visible. What is not visible about the iceberg can be dangerous!  The book is  a clarion call to action, compelling all of us to be better informed, self-aware and engaged in our efforts to preserve a dharmic world order.