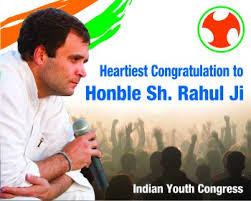 The official Youth Congress handle @Yuvadesh has made crude, nasty jibes at PM Modi. The handle mocked the PM for his humble origins and for not possessing the one attribute which colonized Indians rate the most – a polished English accent.

The above tweet shows PM Modi talking to two world leaders and commenting – “Do you know what kind of maymays (mispronounces memes) the opposition is making about me?” In reply, US President Trump says “Thats called memes, not maymays”. Germany’s Chancellor Merkel says “You focus on selling tea.”

Congress was quick to disassociate itself from the handle saying that it is run by ‘volunteers’. However, the blue-ticked (i.e. Twitter verified) handle clearly says it is the ‘Official Handle Of Indian Youth Congress’s online magazine – yuvadesh.in ‘

And there was another tweet, also deleted now, which had the kind of double-meaning vulgar ‘humor’ seen in Bollywood movies –

Another derogatory tweet by Yuva Desh which was posted on November 20, has not been deleted yet pic.twitter.com/EJcq224xtV

This one shows the PM speaking at a rally for Gujarat elections (BJP has been in power in Gujarat since 1995) saying “22 years were not enough for vikas (development), we need one more chance”. A girl standing in the audience is thought wondering “If instead of peeping into other’s bathrooms, you had glanced into your own bedroom, Vikas (your son) would today have been of marriageable age.”

PM Modi and his wife Jashodaben were engaged by their parents when they were minors, and married when Modi turned 18 and she was 16. However, Modi left within 3 months of the marriage for travelling across Bharat and later got involved in RSS work. The marriage was not consummated, and Modi, having made the choice to be a lifelong bachelor and focus on public service, wanted to divorce Jashodaben so that she could remarry. However, Jashodaben refused and they have been staying separately ever since without any ill will.

The Congress leadership and extended ecosystem has always used Modi’s private life to label him either as a ‘wife deserter’ or ‘impotent‘.

The ‘peeping into bathrooms’ jibe against the PM was made by Congress’ first family scion Rahul Gandhi earlier this year, in an attempt to counter Modi’s remark that ex-PM Manmohan Singh knew the art of ” bathing with a raincoat on as there was not a single taint on him despite so many scams having taken place during his regime.

5 years back, Congress leaders would have escaped all scrutiny for their demeaning comments against leaders of other parties, but in the social media era this is no longer possible. The vast gap between what the Congress and its cadre claims to be, and what it really is, is starkly visible to all in the country.