Yes to Nationalism, No to Imperialism 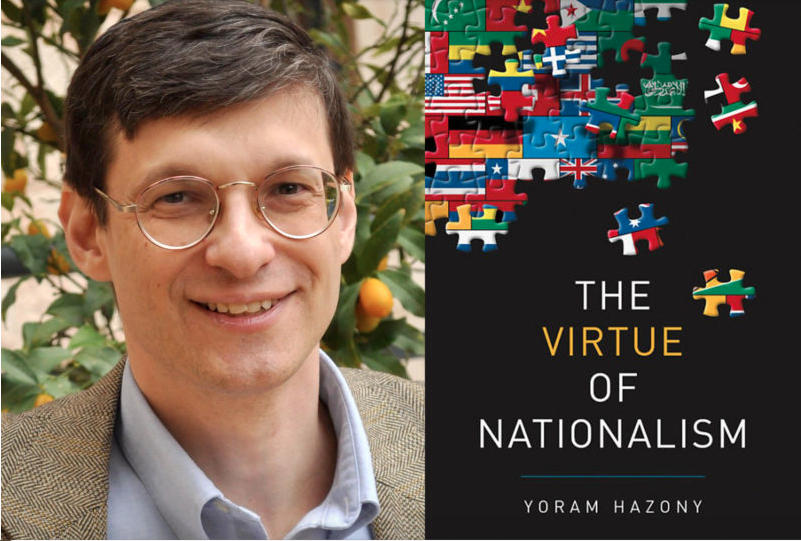 Yoram Hazony’s breathtakingly counterintuitive book, The Virtue of Nationalism (Basic Books), corrects a simple but colossal mistake: The Nazi monstrosity, he argues, did not result from nationalism but from imperialism. Hitler aspired not to make Germany great in education, justice, and industry, but to create a thousand-year Reich(empire) and conquer the world.

This fact, obvious to everyone during World War II, soon thereafter disappeared from sight because post-war Germans, especially Chancellor Konrad Adenauer (in office 1949-63), believed that demonizing nationalism and transforming Germans into model Europeans would best serve to normalize their country and hinder yet another German drive to brutal conquest. Or, in Hazony’s more pungent formulation, the Germans decided to pursue their imperial dream not through invasion but through the gentler mechanism of what today is called the European Union (EU).

The author argues that international federations and institutions, equipped with abstract, universalist ideals, are inherently imperialist, even when they take subtle, non-military, and seemingly benign forms. No less than openly aggressive imperialism, what Hazony terms the liberal construction of the world spreads dogmatism, fanaticism, hate, and intolerance.

Conversely, and as the title of his book suggests, Hazony is keen to redeem nationalism from its current ill repute. He argues for “a world of independent national states [as] the best political order to which we can aspire.”

Religion plays a central role, with the idea’s origins located in the Hebrew Bible and its fulfillment in what he calls the Protestant construction built in the Netherlands, the United Kingdom, and the United States. In those countries, a cacophony of divergent voices competing with each other drove improvement in all fields of human endeavor, inspiring excellence in the arts and sciences, creating unprecedented wealth, and bequeathing unique freedoms.

Americans should easily understand the benefits of pluralism, for the U.S. states famously serve as 50 laboratories of democracy. So too are the 44 sovereign countries of Europe, where a positive breakthrough in one (say, religious tolerance) is often emulated by others, while a terrible idea (welcoming a million unvetted non-European migrants) is shunned. “It is only through the many national experiments that we can learn, over historical time, what is in fact best.”

Seeing national states as vulnerable, Hazony welcomes the turn to nationalism manifested by Brexit, Donald Trump, Jair Bolsonaro, and the civilizationists, seeing this as a necessary popular revolt against the liberal construction, a testimony to the common-sense nationalism of the masses versus the self-interested imperialism of the experts. The process is also taking place in non-Western countries such as Saudi Arabia, where Crown Prince Mohammad bin Salman seeks to abandon the imperialism of Wahhabi Islam.

As an Israeli, Hazony naturally takes special interest in what this means for his own small, anti-imperialist country. He discerns a widespread but false syllogism: (1) Nationalism caused Auschwitz; (2) Israel is (due to its frequent reliance on military force) the West’s most nationalist country; therefore, (3) Israel is the most Nazi-like and dangerous Western country.

Such logic accounts for the otherwise inexplicable 2003 Eurobarometer poll that found Israel to be by far the world’s greatest threat to peace (and the United States tied for second place with Iran and North Korea). A correct understanding of Israel’s nationalism would do wonders for its reputation.

Hazony has written a deep, persuasive, and timely book. His key idea – yes to nationalism, no to imperialism – deserves careful consideration followed by effective action. Because distinguishing between the two orders is far less self-evident than one might think, The Virtue of Nationalism serves as a discreet manual for this long-term battle.

(This article has been reproduced here in full from danielpipes.org.)

The ideas explored in the book ‘The Virtue of Nationalism’ are indeed very relevant to our current era. We fully agree that the new world order imagined by Western globalist elites seeks to undermine the sovereignty of non-Western nation states – this liberal imperialism is the new age colonialism, which must be resisted through the common-sense nationalism of the masses.

But Hazony’s religious argument that the idea of independent national states originated from the Hebrew Bible (Old Testament) and was fulfilled by ‘Protestant construction’ is deeply contestable. As argued here by a Professor of Political Science, the rise of the Westphalian system of nation states in Europe had ‘more to do with the very practical need to end a ruinous cycle of religious wars in Europe than with Protestants deriving a commitment to “an order of independent nations” from their reading of the Bible’.

Indeed, both Protestantism and Catholicism share the idea of Christian religious universalism, which has done much harm to the world by eradicating social & cultural diversity. Ironically, this Biblical idea of religious universalism & supremacism has directly fuelled the colonialism of European powers from the 17th-20th century, the same kind of imperialism that Hazony argues against today.

Hazony also ignores the developments in parts of the world other than Europe. For eg., Bharat had multiple republican states around 600 BCE, with differing political systems. Even during eras when large empires ruled such as the Mauryan or Gupta Empire, other powerful independent states still existed (especially in the South), in relative harmony.

But this does not take away from the central theme of the book, which makes a strong case for “a world of independent national states [as] the best political order to which we can aspire.”