Why The Country Needs Modi At The Helm? 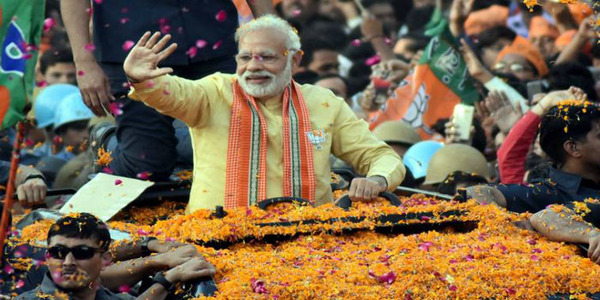 Mid-way through the General elections 2019, it is absolutely imperative for the country that Modi returns to lead the country again and steer it clear from the raging storms from within and outside our borders.

The peaceniks and Lutyen’s Delhi would say that this is exactly the position Modi wanted the country to be in to extract maximum political mileage. However, they have never been in sync with the reality and the challenges facing this nation both from within and outside.

Up in the North, we have leader’s like the Abdullah’s and the Mufti’s who speak the language of the enemy for their narrow partisan interests and are ready to trade the national interest at the drop of a hat.

The terror networks and organisations thrived under their rule with aplomb and the Hurriyat and the JKLF were allowed to carry out their anti-national activities in cahoots with the ISI in the Valley. They saw to it that the Kashmiri pandits were driven out from Kashmir or massacred in the most ghastly ethnic cleansing ever witnessed to which the then government at the Centre was a mute spectator.

After seven decades, someone had the spunk to tighten the screws on these anti nationals and hit the terror factories across the border.

However, the peaceniks and pseudo seculars immediately raised the red flag and were clamouring for talks and dialogue with Pakistan and its support structures in the Valley. It’s another matter that they maintained a deafening silence against the genocide on Kashmiri pandits.

At this critical juncture when the nation votes, the question needs to be asked as to who amongst the current lot of leaders is capable enough to safeguard and secure the nation’s interest and why were the anti-national activities of the Hurriyat and the JKLF allowed to go on all these decades.

Pakistan used these convenient havens to promote terror in the Valley while the State and the Central governments remained a mute spectator. Now when Modi has exposed their terror funding and illegal assets, the likes of Abdullah’s and Mufti’s, who should have reined these so called separatists who are hand in glove with terrorists when they were in power, are crying foul.

While Pakistan is aiding and abetting terror in the Valley through ISI, China is clandestinely helping the former to keep up its activities against our country.

China has found a perfect hunting ground in debt ridden Pakistan and is helping the latter, both militarily and economically. The China Pakistan Economic Corridor (CPEC) is a euphemism of China’s hegemonistic designs to expand its boundaries and will go through POK which is Bharat’s territory. Only a strong leader like Modi can check China’s aggression and nefarious intentions and not a cluttered opposition .

Bharat and Modi demonstrated our country’s strong intent at Dokhlam where China’s advances were thwarted by Modi. China will continue to test Bharat as it harbours expansive designs. Only a strong leader with tested credentials like Modi can protect the country’s interest against such a strong enemy.

Modi’s eastern reach particularly in West Bengal is an attempt to checkmate Mamta in her own backyard. Mamta has taken a complete U-turn on the Bangladeshi immigrants, signifying that for her political interests and vote bank politics take precedence over national interests.

The same Mamta had launched an agitation in parliament in 2005 against these illegal immigrants and now she is opposing the (NRC) National Registry for citizens for her narrow political interests.

Terror and terrorism knows no boundaries and is a big threat as the dastardly Sri Lankan Easter attacks demonstrated. It has to be nipped in the bud at its origin as Modi demonstrated in Balakot. Only a strong political leader with impeccable credentials can take such tough and instant decisions in the interest of the nation.

There are a lot of issues and problems like unemployment,poverty, farmers’ unrest and many more that face this vast and diverse nation with a burgeoning population.

But these problems did not just crop up in the last 5 years as a large part of the media try to make us believe. They have been there since independence and could not be resolved in the last 67 years prior to 2014.

So Modi, even if he had a magic wand, could not have sorted the mess created before he came to the national scene. However, an earnest effort has been made by him to tackle the issues of the masses head on.

But no issue or problem is bigger than the nation. National interests, its sanctity and sovereignty takes precedence over everything else and Modi through his steely resolve has aptly demonstrated that he is the best man to safeguard and protect our country’s interest against enemies from within and outside are boundaries.