Why ‘Language Politics’ is toxic for Hindu civilisation 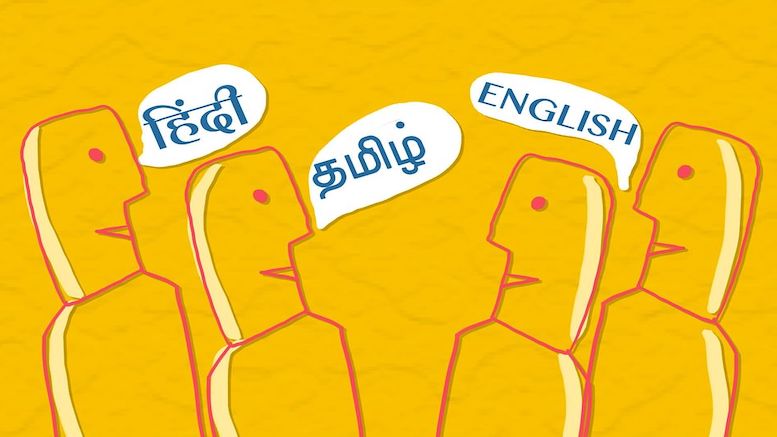 Since the time of independence, Bharat has not had any serious or meaningful approach towards language. As a result, many indigenous languages of Bharat are today in a precarious state. The language situation in Bharat is intimately tied to various other aspects of society and culture that were left to rot as the Nehruvian state adopted a nihilistic, Marxist-influenced approach.

Nehru, the Marxist, deliberately suppressed Hindu civilisational consciousness which was a decisive factor in the freedom struggle. Simultaneously, he also appeased radical Islamists and Christian missionaries. This precedent has been carried forth for over 70 years in the name of secularism.

Under the Nehruvian system, as indigenous language and culture decayed, the masses also suffered in poverty. From the Hindu viewpoint, as enunciated by Chanakya, artha (wealth) forms one of the purusharthas (goals of human life). In the view of Chanakya, the state should ensure prosperity for all.

Instead, the Nehruvian kleptocratic state stole all wealth that was generated. Thus, the wealth of the citizens was appropriated by politicians, bureaucrats, and other corrupt middlemen. As the twin programs of artificial poverty and the erasure of the Hindu civilisational identity were carried out by the Nehruvian system, linguistic identities became a new phenomenon. On many occasions, language agitations even led to violence as migrants and linguistic minorities were turned into scapegoats.

Keeping this historical context in mind, going forward, to fully discard the Nehruvian system of secularism, Bharat must re-discover its Hindu heritage. A dharmic, decentralised, grassroots approach to reviving Hindu civilisation can be adopted, for example, by popularising all the major Bharatiya languages.

Another powerful tool for national integration is the process of Sanskritisation. With these strategies in mind, citizens of a new Bharat can rekindle a new spirit of unity.

Why is linguistic identity superficial?

In the precolonial history of Bharat, there is virtually no instance of language being an identity for any group of people. Traditionally, speech has been a sacred object for Hindus: worthy of worship in the form of the Vak Devi (Goddess of Speech). With such a holistic viewpoint, the spirit of dharma and the shared dharmic culture guided all Bharatiyas into being a united people irrespective of spoken language.

Even today, Bharatiyas mostly get along despite speaking many languages thanks to the unifying influence of Sanatana Hindu Dharma. There is strong evidence of vibrant trade and cultural exchange within Bharat and with the outside world since ancient times. This is evident from the histories of the various kingdoms of Bharat.

The Sena dynasty of Bengal had their roots in Karnataka. The Vijayanagara kingdom had their roots in present-day Kannada-speaking regions, but ruled people speaking Telugu, Kannada, Tamil etc. The Maratha Empire, originating in Maharashtra, spread across most of Bharat. The Cholas of Tamil origin also ruled over regions where Telugu and other languages were spoken.

In pre-colonial times, one hardly finds any historical record of language being used as an identity. It is only in post-independence Bharat that language identity politics came into existence.

Significantly, since ancient times, the ancient Brahmi script appears to have functioned as a unifying factor for Bharatiyas. Brahmi edicts from the Mauryan period of 3rd century B.C.E. have been found across the country.

Ultimately, all the major Bharatiya language scripts are derived from the ancient Brahmi script. Thus, there is already a basis for unity based on the common Brahmic origin of all the major written scripts of Bharat.

Language and script as tools of social cohesion

Linguistic division has even fooled some Bharatiyas into thinking that those who speak different languages belong to different races! The reality is that all Bharatiyas have a joint heritage and share many commonalities in food and culture.

Speaking different languages is not necessarily a basis for different nationalities in the case of Bharat, especially when a common Hindu culture exists and when the languages share much in common.

In many other countries, one comes across examples of there being a host of spoken languages. In China, apart from Mandarin, spoken by 71% of the population (850 million), there are other mutually unintelligible languages such as the Wu language (spoken by 77 million people), the Min language (70 million) and Cantonese (71 million).

Similarly, in France, there are significant differences between the dialects of each region. Langues d’oïl, Occitan and Franco-Provençal languages are the major spoken dialects. The usage of a common script and a shared culture appears as a unifying factor.

Following the 7th century, along with Islam, the Arabic script was uniformly imposed on all countries conquered by Muslims. The proud Persians did not give up their language but accepted the Arabic script. Arabic is a Semitic language that has very little in common with Persian or Pashto or Sindhi, or Kashmiri.

However, thanks to Islamic conversions and conquests, the Arabic script is today uniformly imposed on the people of Persia, Western Punjab, Gandhara, Sindh and Kashmir.

Coming to more recent times, in Mumbai, from around the 1960s, attacks were sporadically carried out on non-local street vendors and other migrants. Tamils, U.P. and Bihari migrants, among others, have been the unfortunate targets. Xenophobia was taken up by the local populace to vent out their anger and frustration at the lack of jobs and opportunities. This was the case all over Bharat, not just in Mumbai.

This divisive politics has its origins in the 19th century writings of the English missionary, Bishop Caldwell, who sought to make the Tamils forget their Hindu roots – shared with the rest of Bharat – to harvest their souls for Christianity.

In the North, formations like Kashmiriyat and Punjabiyat have also been seen recently. These have been propagated by various inimical forces to foster separatism. The end goal of these artificial identities is to erase the culture shared with the rest of Bharat and to promote a separatist mindset.

Hindi must be fully Sanskritised

Article 351 of the Bharatiya constitution calls for promoting Hindi “drawing, wherever necessary or desirable, for its vocabulary, primarily on Sanskrit and secondarily on other languages”. However, in the name of minority appeasement, Nehru and Gandhi promoted the adoption of Hindustani or Urdu (an amalgamation of Sanskrit, Prakrit, Persian and Turkish). The Bollywood film industry has also incessantly promoted Urdu-domination.

Many South Bharatiyas have every now and then have vented their frustration at being “forced” to use Hindi. Most South Bharatiya languages are heavily influenced by Sanskrit. It is likely that the alienation felt towards Hindi could be because of the nuisance of Urduized Hindi which is imposed upon the public by Bollywood and other avenues of pop culture.

Hindi needs to be fully Sanskritised so that it can be easily understood by all Bharatiyas from East, West, North or South.

Ironically, at the same time, English (the language of this article) is fast becoming the daily spoken language among the educated classes. This can be seen to some extent as a blind aping of the erstwhile British colonialists.

The adoption of English is slowly wiping out Bharat’s indigenous languages, especially in the major cities. There is also a certain smugness which comes with knowing that one is part of the English-speaking Bharatiya elite.

The blind adoption of English has also led to the tragic suppression of Bharatiya talent. By suppressing the Bharatiya mother tongues, the Bharatiya state has effectively destroyed the lives of crores of non-English speaking Bharatiyas who find themselves with no access to well-paying jobs or higher education.

The forced adoption of English has held back the Bharatiya economy from fully blossoming. In general, English imposition has been a calamity for Bharat.

On an individual level and at the level of society and government, encouraging speakers of various Bharatiya languages to learn each other’s languages is a good approach to bring about better national integration and cohesion.

Mutual intelligibility becomes easier if the major Bharatiya languages begin to also publish in a common script like the Devanagari script or the Roman alphabet, alongside their own script.

For example, the famous verse of Bhagavad Gita 4.8 can be roughly rendered in Roman script in various Bharatiya languages as follows. Much of what is written could be intelligible to someone who is familiar with at least one of the languages. The Roman script with IAST convention can be used to represent the verse as follows:

Breaking India forces created by colonialists, missionaries, Islamists, and various political parties have been inimical to the existence of the Hindu civilisation. Separatist ideologies, such as linguistic chauvinism, run counter to the spirit of Hindu civilisation and must be overcome.

Next, Hindi must be fully Sanskritised so that it can be easily understood by all. At the same time, the English language must be slowly de-emphasised in Bharat. In its place, indigenous Bharatiya languages must be promoted. This will ensure a significant economic advantage, as the indigenous Bharatiya talent will contribute to building a more prosperous economy for the benefit of all.

Finally, ways to learn each other’s languages – like the joint usage of a common script alongside the existing scripts – must also be explored.