Why are media & fact-checkers silent over Rahul Gandhi’s wild lies? 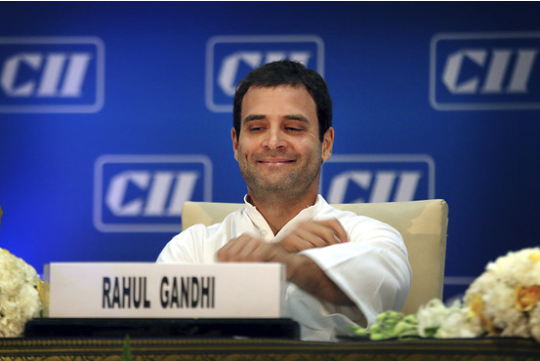 One thing Congress President Rahul Gandhi has managed to do after multiple make-overs & rebranding exercises, is to shed his image as a ‘good boy’ of politics. That image lasted for as long as he could stay in the shadows and escape the inevitable public scrutiny which being a direct PM candidate brings. The arrogant disdain bubbling under the surface of the quiet, smiling face did show through in the Ordinance tearing drama of 2013.

But ever since leading his party to a disastrous defeat at the hustings in the 2014 Lok Sabha elections, Rahul Gandhi has been relaunched in a more combative avatar by the Lutyens’ coterie and has been advised to shoot his mouth off with gay abandon on anything and everything. Quite predictably, the Gandhi surname has ensured that this 48-year-old ‘youth’ politician is given a free pass by the national media and has escaped even a fraction of the scrutiny that Narendra Modi’s words and speeches were subjected to in the run up to the 2014 elections.

Here, we highlight a few of his pet rants that are bereft of facts, logic & common sense –

1.) ‘Chowkidar chor hai’ (aka Modi has looted the people to benefit his ‘friends’ Nirav Modi, Choksi, Mallya and Ambani)

This is the standard gambit that Rahul Gandhi uses in almost every rally. Its almost as if he is reflexively trying to use the tactic that Opposition used to defeat his father Rajiv in the 1989 election with the famous ‘gali-2 mein shor hai, Rajiv Gandhi chor hai’ slogan. But the crucial difference is that Rajiv Gandhi was caught with his hand in the cookie jar over the Bofors scam – there was solid investigative work by journalist Chitra Subramaniam linking Rajiv to middle-men like Ottavio Quattrocchi & Win Chadha.

But in trying to tar Modi with the same corruption brush that his own family is now indelibly tarred with, Rahul Gandhi has no option but to make wild, desperate allegations. He knows, and the whole of Lutyens’ Delhi knows too, that scamsters like Nirav Modi, Mehul Choksi, Mallya, bled the public banks dry under the benign gaze of the UPA 1&2 regimes, and that the uncovering of the NPA mess & subsequent penal action against these loan defaulters has occurred under Modi. Yet he hopes to strike a chord with a section of dim-witted voters by juvenile byplay on the Modi surname, or by distorting the Rafale deal.

One of the prime avenues for corruption during Congress years has been defence acquisitions – right from the Jeep scam under Nehru, to Bofors under Rajiv, to Augusta Westland under Sonia. So the dynasty’s desperation to pull Modi down into the same muck is understandable. But it is a crying shame that the Rafale deal which was hanging fire for 10 years in the UPA era, and which was fast-tracked by Modi to bolster a severely-constrained IAF, has been allowed to become a political issue by our nation’s media & judiciary. In an earlier article, we have analyzed at depth why the Congress ecosystem i.e. Lutyens’ Delhi is so desperate to scuttle the Rafale deal, which every defence analyst worth his salt will tell you is a must not just for the IAF but also to create a defence-industrial ecosystem in Bharat.

That a single tax code across the country was necessary is a no-brainer. Successive UPA Governments lacked the political will, focus and respect for federalism that was required to implement this much-needed tax reform. It was a huge achievement that Modi was able to get all the states on the same table and implement this huge reform within 3 years of coming to power. Like all new systems, this one too had its fair share of hiccups, but an unerring focus on implementation has ensured that most of these issues have been ironed out and the economy is now poised to take advantage of this structural reform.

In earlier avatars, Rahul Gandhi was accused of talking in abstract terms and lacking policy specifics – who can forget his meandering speech at the 2013 CII conclave in Mumbai where he talked of hearing a ‘beehive like buzz’ and of believing in that catch-all phrase ‘inclusive growth’.

So now Rahul Gandhi 6.0 is talking of making everything in India – from mobiles, to fighter planes, to shoes – and not just Made in India, he adds a local flavor, for eg. he promises ‘Made in Chitrakoot’ while campaigning in Madhya Pradesh. But at the same time, he takes constant digs at PM Modi’s ‘Make in India’ program aimed at boosting domestic manufacturing. A scion whose family studiously ignored manufacturing sector for 50 years while economies far smaller than us like Korea, Malaysia were taking off, is now promising to transform the nation into a manufacturing powerhouse, and not one economist has come forward to challenge these shambolic rants?

No one has questioned the basic economic viability of promises like opening food processing plants, or ‘potato factories’ (he meant to say potato chip factories), in every district? Hasn’t the disastrous experience of 50 years of public-sector intervention in every sphere of economic activity taught us anything? Why aren’t the Raghuram Rajans of the world commenting on such juvenile economic policies?

Whoever is in charge of Rahul Gandhi’s twitter handle has no idea on what to say, and how and when to say it. This jibe on NSA Ajit Doval, probably the best intelligence officer Bharat has had in recent times, says it all. If Modi had said something like this in the run up to 2014 elections, Lutyens’ elites would have been all over him like a rash.

Abominable. The "dealmaker" was risking his life going to Kandahar to free the hostages, just as he did going into Golden Temple undercover during Black Thunder. The same guy was appointed as IB Chief by an INC govt later – presumably his dealmaking was kosher then… https://t.co/ygm4IQxZMl

Here is another example of the baseless, low-IQ content that makes up the lion’s share of Rahul Gandhi’s speeches. If HAL were indeed capable of manufacturing advanced fighter jets, why then does the IAF fleet consist primarily of Mig-21 (Russian), Mirage 2000 (French), Sukhoi Su-30(Russian) etc. Yes, indigenization of defence equipment is a must and the ‘Make in India’ programme is the most serious step Bharat has taken in the direction in several decades, but a dynast whose family did zilch on this front for the 50+ years they ruled, making such wild claims and not being held accountable is astonishing to say the least.

The above is just a sampling of the asinine utterances that Rahul Gandhi has been making for years now. It would take a team of dedicated resources just to track each and every one of his gaffes and baseless rants.

It is a sever indictment of our political establishment, media and intellectual class that this loose-talking, vacuous, entitled middle-aged man is being seriously touted as a potential PM candidate.