Where is ‘Extremism’ in Bharat and Where in Pakistan? 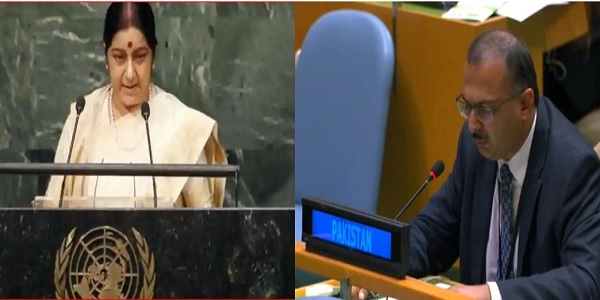 How confused, uninformed and maybe mischievous the discourse on religion and extremism has become, was obvious again at the recent General Assembly of the United Nations. A Pakistani diplomat, in his reply to the speech by Bharat’s foreign minister Sushma Swaraj, lambasted the “unabashed Hindu extremist Yogi Adityanath”, the chief minister of UP, for “advocating the religious superiority of Hindus”. He also bemoaned that in Bharat claims of religious superiority get patronage all across the country.

Did anybody get the irony of it all?

Pakistan’s grouse is that there are Hindus who advocate Hindu Dharma as superior to Islam and Christianity. They call such Hindus as extremists or fundamentalists. They even claim that a Hindu organisation like the RSS is the “breeding ground of terrorism in the region”.

Now what is the reason for Pakistan’s existence? The reason is Islam. A part of Bharat was cut off and became a separate country only, because those, whose forefathers converted to Islam for whatever reason, wanted to live among themselves according to the tenets of Islam which they believe are necessary to reach paradise. That severed part of India became the ‘Islamic Republic of Pakistan’. Islam was declared as state religion. Islam is advocated in Pakistani schools and everywhere else over Hindu Dharma and other traditions. Any criticism of Islam is banned. A blasphemy law is in force with death as punishment. Religious minorities had and have a tough time. Hindus have been almost wiped out – driven out, converted or killed. Their percentage dropped from at least 15 per cent at the time of partition to under 2 per cent.

So how can a person from such compromised country, who has some degree of fairness, object to Hindus advocating Hindu Dharma in Bharat when his own country is not only advocating Islam, but suppressing and almost exterminating other traditions in the name of Islam? Yet in Bharat, ever since partition, the percentage of Muslims is growing proportionally to that of Hindus.

So where is ‘extremism’ in Bharat and where in Pakistan?

The reason for his brazenness might have been that he was sure that nobody in this illustrious gathering at the UN was likely to mention any connection of Pakistan with Islam. Neither will mainstream media. It seems, Islam must not be mentioned, except if one praises it. Yet Hindu Dharma can be freely vilified.

This Pakistani diplomat can even be sure of support for his comment within Bharat. Why? Because NGOs, media and not least the Congress president Rahul Gandhi have already scared the world that Bharat under Prime Minister Modi is in great danger of becoming a Hindu nation where democracy is in danger and Muslims and Christians will be at the mercy of Hindus. There is clearly an attempt to paint Hindus as extremists and even as terrorists, and in this way deflect from the real danger which is jihadi terrorism and jihad is no doubt an important part of Islam.

Any terrorism has an objective. So what is the objective of jihadis? They want a world where ideally only Muslims live, or non-Muslims are at least subdued, because that objective is a core tenet in their doctrine. They believe they are not only allowed but will be rewarded for treating non-Muslims ‘harshly’ and even can kill them without committing a sin in the eyes of Allah. Millions were killed in the attempt to rid the world of infidels over the centuries, and the killing still continues –not only by ISIS. The difference between victim and perpetrator is only that the killers or their forefathers have converted to Islam and now believe that the highest hates those who don’t acknowledge that Islam is the only true faith.

It is no doubt a strange faith where the Highest Power, who is the cause for this vast universe, is seen as hateful and jealous, and who will let those, who don’t accept his commands, burn forever in hell. Yet strange as it may seem, such faith is officially the belief of about half of the human population on earth – Muslims and Christians. The Christian god, too, is allegedly jealous and rejects those who don’t believe in him. And worse, such a hateful god is claimed to be the ‘true god’, and belief in him is enforced with the bogey of eternal hell, whereas the benign Hindu Dharma has been successfully, but highly unfairly, vilified as an oppressive, primitive, depraved, idol-worshipping religion.

Many diplomats at the UN might have fallen for this vilification campaign by vested interests and might have agreed with the Pakistani diplomat that it is an ominous sign when Hindu Dharma is advocated in Bharat and that this needs to be stopped, whereas it’s okay when Islam and Christianity expand their reach.

Yet nothing can be further from truth. Anyone who dives into Hindu Dharma will realise that it is clearly superior to those two religions which demand blind belief in unreasonable and divisive dogmas.

Here is just one reason for its superiority: Hindu Dharma propagates universal brotherhood of all human beings because the essence in all is the same divine consciousness. In contrast, Islam and Christianity propagate conditional brotherhood – the condition is that one needs to belong to their particular religion to be seen as a brother, because the Highest allegedly loves only Muslims and Christians respectively.

What is more likely to be true? Even science supports the Hindu view by claiming that all is an interconnected whole.

Don’t we even in daily life compare and choose what is superior? Any reasonable person would do that. How much greater is the need to choose the best option when the question is about how to live our lives in an ideal way and in tune with the cosmic laws?

The fact, that the superiority of Hindu Dharma is rather obvious to any intelligent person, may have been the reason why the dogmatic religions, which showed up relatively late in the long history of mankind, do not just claim superiority, because this would open them to being compared with the traditions before them. Instead, each one of the two claims that it alone is true, that their holy book contains the word of the true god, and all must follow it at the threat of eternal hellfire.

Such claim, drilled into kids early on, is preventing them even as adults from daring to make an informed choice. “What if this claim of eternal hell is true?” they may think – and remain stuck in blind belief not daring to intelligently inquire into what is true about themselves and this universe – to the detriment of humanity as a whole.

(This article was published on author’s blog and has been presented here with her consent.)