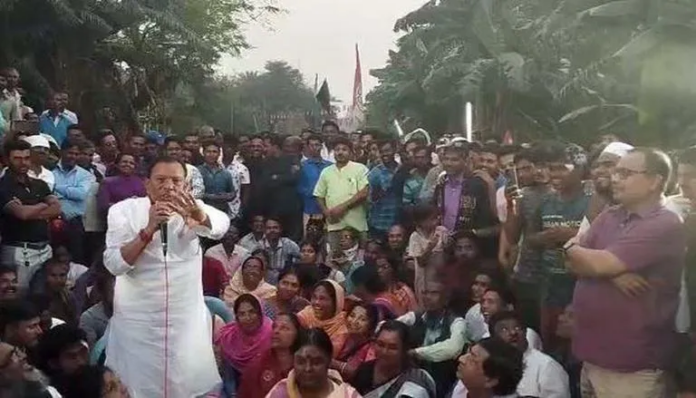 The fascist TMC regime led by Mamata Banerjee is notorious for positioning rogue and crooked elements in positions of power. Now, WB prisons minister Akhil Giri has plumbed new depths by making dreadful elitist and sexist comments about the nation’s president, a self-made woman who has risen from humble origins and is a beacon of inspiration for millions.

Giri said in Nandigram on Friday, “We don’t judge by appearances. We respect your president’s chair. But what does your president look like, Baba?”

The crowd of TMC supporters surrounding Giri broke into laughter when he made his disgusting misogynist jibe at President Murmu. In June, a group of vanvasi (‘tribal’) women had danced with CM Mamata Banerjee in Alipurduar, WB. But it was noticeable that only two women in that group were wearing gloves – the two who held hands with Mamata as she danced for the photo op. This led many to wonder if Mamata thought the vanvasi women were ‘unclean’?

Now, with Giri’s remarks on President Murmu, a Sarna vanvasi from Jharkhand, it seems that looking down upon vanvasis as ‘inferior’ might be a trait in Mamata’s party.

Politicians like Akhil Giri and his boss Mamata reflect all that is repulsive about this nation’s secular and progressive politics. It is full of hypocritical and Adharmic individuals of low moral fiber, who harbor feudal and colonized notions about beauty and society. These secular-liberal elements deviously project their own failings and bigotry on the country’s majority population and Hindutva ideology, obfuscating the truth that Hindutva stands for restoring the Dharmic soul of our civilization which has allowed various communities to co-exist in harmony and mutual respect for millennia.

Dharma teaches us to respect the divine spark in all living beings and to look beyond superficial attributes while judging others. Colonial-era European notions of “fairness means beauty” should be treated with contempt in a civilization where major deities, both male and female, have been dark-skinned. Sadly, our left-liberal elites and their collaborators i.e. secular-feudal politicians are some of the worst purveyors of the classism and elitism which our colonizers bequeathed on us.

Criticizing Giri’s comment, BJP leader Amit Malviya wrote on Twitter, “Akhil Giri, minister in Mamata Banerjee’s cabinet, insults the President, says, “We don’t care about looks. But how does your President look?” Mamata Banerjee has always been anti-Tribals, didn’t support President Murmu for the office and now this. Shameful level of discourse…”

BJP state president Sukant Majumdar also tweeted condemnation of this comment. He wrote, “CM Mamata Banerjee has always been anti-tribal….Akhil Giri took it further and insulted the president on her look. Why she and her govt hate tribals so much?”

According to Eisamay’s report, Akhil Giri targeted not only the president but also the leader of the opposition in the state, Suvendu Adhikari. Giving a formal warning to Suvendu, he said, “If Mamata Banerjee gives a little signal, then I will break all the arms and ribs of Suvendu Adhikari. They are showing us central forces. Panchayat elections are ahead. We do not want unrest. We have all rushed on the orders of the Chief Minister. Don’t play with fire.”

BJP workers held protest marches and blocked roads in districts across West Bengal in protest against the ugly comments targeting President Draupadi Murmu. They burned effigies of Akhil Giri and strongly protested against his comments.