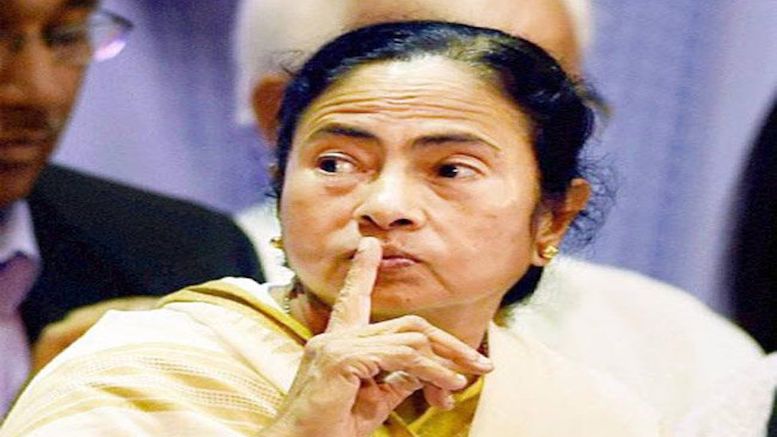 It has been over a week since the Home Ministry has issued a  show cause notice to Mamata government for its repeated violation of the lockdown norms. “As per further reports received from the security agencies, gradual dilution of lockdown has been reported from West Bengal with an increase in the number of exceptions provided by the state government,” stated the letter sent to the state secretariat, Nabanna, a day before PM Modi’s video-conference with chief ministers of all states to assess the situation.

The letter mentions names of minority-dominated areas including Metiabruz, Raja Bazar, Garden Reach, and Ikbalpur among others, that have been found in regular violation of lockdown norms.

It seems that the Mamata government has not been able to comprehend the gravity of the situation. Despite the warnings and having attracted flak from across the country for her anarchic operations and vote bank politics, the TMC members continue to demonstrate their abject disregard for all official protocols. On April 8th, the party’s official handle leaked video footage of the Prime Minister’s video conference with all state CMs, revealing sensitive center and state governments’ deliberations on the volatile situation, while decisions were still at a pre-mature state.

This breach of trust was met with heavy condemnation by citizens from all walks of life, all of whom realized that West Bengal’s ruling dispensation was not worthy of sharing sensitive and confidential information.

The state machinery has failed miserably in enforcing the first phase of the lockdown. Masjids in Muslim dominated rural areas held regular prayer meets, flouting social distancing protocols. Videos were seen exposing police haplessness in containing large crowds that had gathered in a mosque in the minority-dominated Murshidabad district. Even while the admin was making announcements over loud-speakers, the large crowd was seen leisurely standing on upper floors and making their way out.

But the same admin is very effective in hounding down members of the general public if they exercise their free speech right to write social media posts criticising the state government. Law-abiding citizens are being threatened with arrest if they don’t delete their posts and apologize for the same.

Oncologist Indranil Khan was illegally detained overnight by police and a hate-speech(!) FIR lodged against him for highlighting the challenges on-duty doctors have to put up with in absence of appropriate PPE to fight the Covid-19 outbreak. High Court had to step in to end the witch-hunt against the doctor.

Kolkata Police from Parnashree Police Station visited one Rakhi Mitra’s home for some pointed questions regarding the Mamata government’s handling of the crisis.

The Parnashree Thana officials alongwith women constables had come to pick me up at the residence of @DrDipankarDebn1 as he is the Chairman of HSG. They forced me to remove this post of mine. And threatened that if I don't remove it they'll come to my place to pick me up pic.twitter.com/HG4BXVbOXz

While her state is grappling with a crisis, the TMC supremo has taken umbrage over the yellow color of PPE kits provided by the centre. The medical officer of a rural hospital in Jhargram district has been issued a show cause notice for switching off lights and lighting candles and diyas on April 5 inside and outside the health facility following a call given by Prime Minister Narendra Modi.

In a viral FB post, students of Burdwan Medical College & Hospital have laid bare the grave situation facing healthcare providers in the state – 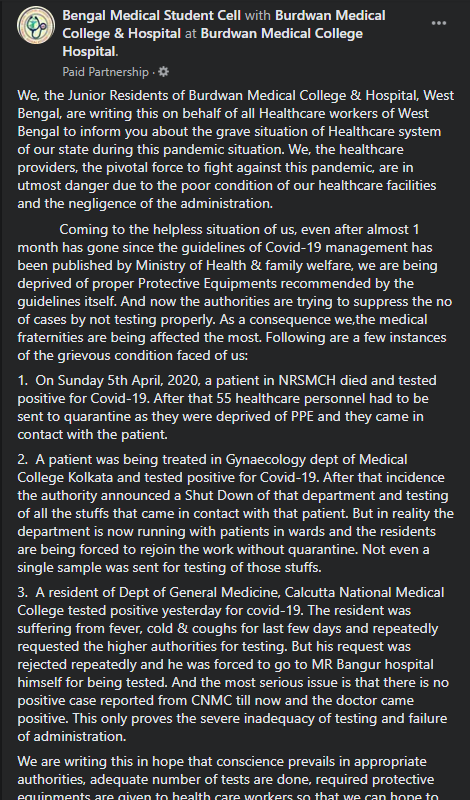 All over the world, Covid-19 is causing most deaths in patients who are already suffering from other co-morbidities like diabetes, hypertension etc. But in WB, the government has set up an expert panel to ascertain ‘cause of death’ of Covid-19 positive patients – hospitals, across the state have been asked to adhere to the checklist and attach “supporting documents” for “audit” by the expert committee.

This has obviously led to allegations Mamata Banerjee, who is also the health minister, is trying to underplay Covid related mortality by thwarting doctors from writing Corona as a reason for deaths. An FIR has been lodged against Dr. Subhash Sarkar, BJP MP from Bankura, for saying that patients are dying of Covid-19 in the state but such deaths are being suppressed by the admin. As of date, WB has reported 310 Covid-19 cases with 12 deaths.

Now, there is increasing disquiet in the medical community on the low number of tests being conducted by the West Bengal Government. At a time when the entire nation has scaled up its testing, WB is trailing far behind.

The state government has blamed the shortage of kits provided by centre for less testing in West Bengal. But Shanta Dutta, director of National Institute of Cholera and Enteric Diseases (NICED), the primary testing facility in West Bengal, has informed there is no shortage of kits. In fact, NICED is getting far lesser samples than its capacity to test. for testing  Director Shanta Dutta has , the primary testing facility in West Bengal, is getting far less samples of COVID-19 to test than it was getting in the initial days of the outbreak, the institute’s director said.

“We had only two labs and 40 testing kits,” CM Mamata Banerjee had told journalists at the State secretariat on April 11, whereas the reality is that WB has seven testing facilities, five government ones and two private.

Even as lockdown phase-2 has started, the privileged minority continues violating social distancing norms and gathering for prayers in mosques. Tension broke out in Chinchura area of Howrah district after police was informed of a gathering in a local mosque  and visited the site to disperse the crowd.

The state of West Bengal is in shambles. The world is coming together in fighting this deadly contagion, but West Bengal is reeling under a deadly cocktail of whimsical and tyrannical authoritarianism, administrative incompetence and minority appeasement. And just like Maharashtra, the incompetent ruler of West Bengal is getting a free pass from liberal-secular media because she is firmly placed in the ‘secular’ camp.