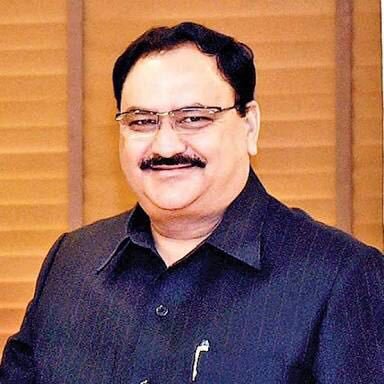 Decks could be cleared for J P Nadda, the current Health Minister in Prime Minister Modi’s cabinet, to take over as the next Chief Minister of Himachal Pradesh with the induction of Prem Kumar Dhumal or his MP son Anurag Thakur in the Union Cabinet.

Assembly elections are due in Himachal in a couple of months and former Chief Minister P K Dhumal and his former cabinet colleague and now Union Minister J P Nadda are the front-runners for the CM post after the ensuing elections, provided BJP wins. Even if Dhumal’s son Anurag is inducted in the Union Cabinet in Sunday’s reshuffle Dhumal’s claim to the Chief Minister’s chair could be neutralised, paving the way for Nadda to be the next Chief Minister of the State given the beleaguered state of the Congress party.

In 2012 two parallel power centres emerged within the BJP headed by Dhumal and party veteran Shanta Kumar. The in-party fighting that ensued culminated in a loss for the party due to its below par performance in Kangra district which elects almost twenty five percent of the total MLAs. The bad performance of the party in Kangra  was attributed to the Shanta-Dhumal feud resulting in wrong ticket allotment and rebel candidates cutting votes of party candidates. Shanta Kumar comes from Kangra and is the sitting MP from Kangra.

As the 2017 assembly elections in Himachal draw closer, the BJP leadership could thwart any repeat of the 2012 scenario by moving Dhumal or his son Anurag to the Union cabinet thus clearing the decks for J P Nadda to take over the reins of the state. This would also send a clear message to the party cadre within the state to fight in unison for the party’s victory and not for any leader.

J P Nadda was a minister in the Dhumal Cabinet from 2007 holding the forest portfolio but quit the ministry before the tenure of the government ended and moved to the Sangathan (party organization) only to emerge as the right hand man of Amit Shah in the party hierarchy. There were reports of differences between the two stalwarts which led to Nadda’s shift to the Centre and quitting the state ministry midway. Those differences obviously have not been resolved and could damage the party’s prospects in the coming elections if left unattended.

It would be no surprise therefore if Dhumal or his son Anurag -MP from Hamirpur – is given a Cabinet berth in Sunday’s reshuffle, enabling Nadda to have smooth sailing in Himachal.